It all happened three years ago. Driving south along the busy A5 on a winter's afternoon, I was approaching Daventry International Rail Freight Terminal (DIRFT), an extensive sprawl of large warehousing units near Crick, Northamptonshire, when something arresting caught my eye. Gulls – hundreds of them, spiralling down out of the sky to some as-yet-unidentified attraction, currently obscured by the roadside hedge.

Pulling sharply into the next available gateway, I was immediately confronted with the spectacle of more than 1,000 large gulls – preening, loafing and bathing in an area of shallow, muddy lagoons which remained hidden from the road. I located two Caspian and a Yellow-legged Gull and, with a couple of Common Shelduck thrown in for good measure, I quickly realised I was on to a good thing.

Then I noticed the landscape. Stretching far across to the M1 was a vast, flat area, which had at one time been levelled to make way for the next phase of development of the adjacent DIRFT complex. Open areas of compressed earth were integrated into an expanse of low, rank vegetation, which included a patchwork of grassland, sedges and scrub. Although a significantly altered habitat, it looked extremely interesting and it was already proving attractive to gulls. What else might it be harbouring? 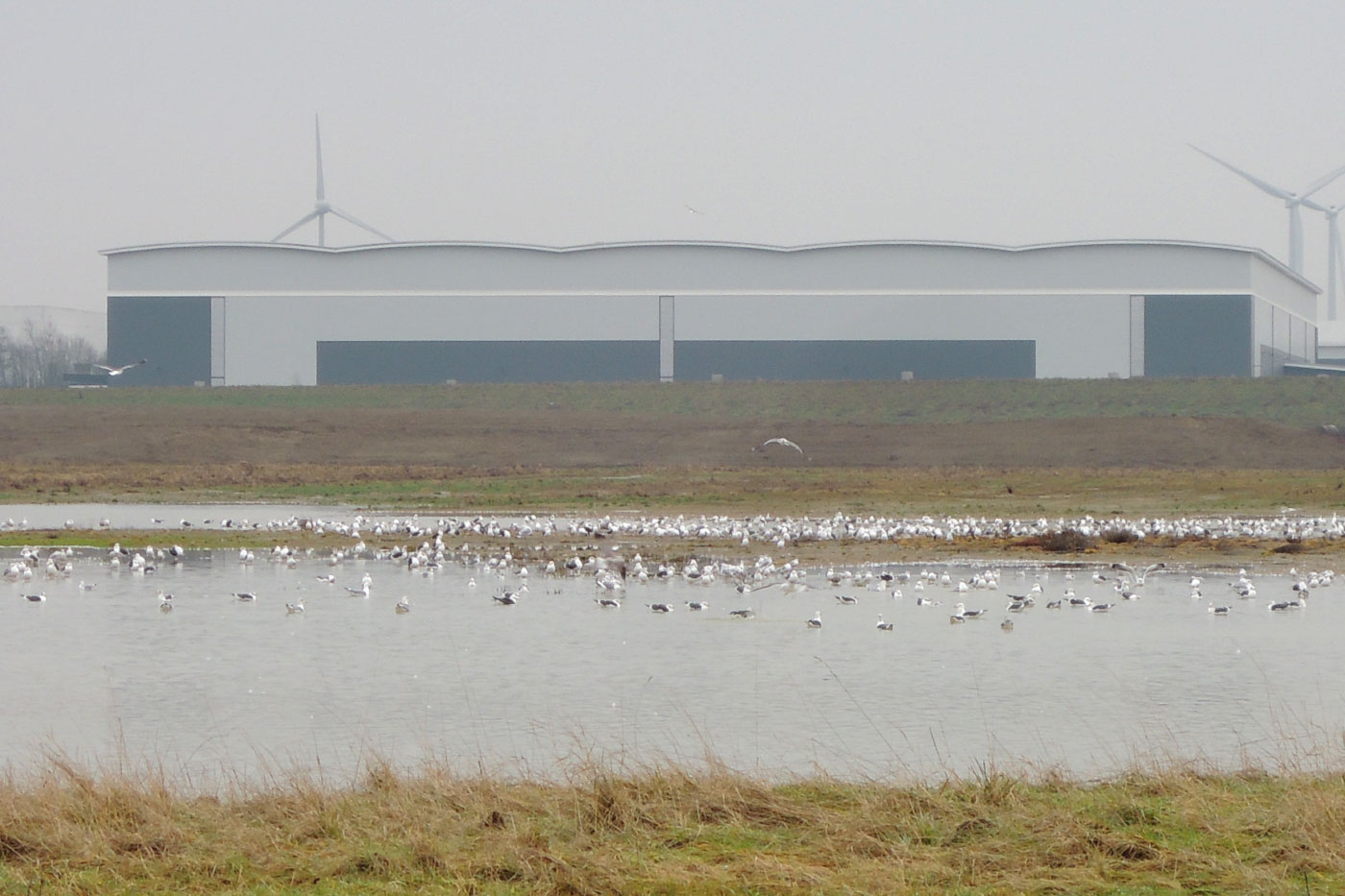 Gulls are particularly good at exploiting human-made habits like that at DIRFT, with Caspian, Yellow-legged and Mediterranean Gulls all seen at the construction site (Mike Alibone).

I am not a big fan of industrial or domestic developments on greenfield sites. However, given the location alongside existing industry, it didn't strike me as being a big deal and the subsequent discovery that the creation of a 70-ha local nature reserve was included as part of the development plan was welcome news, going some way to mitigate the loss of green land to industry.

The reserve, located behind the industrial site's northern perimeter and funded by the developer Prologis, is a collaborative initiative between Natural England, the Environment Agency and the Wildlife Trust for Bedfordshire, Cambridgeshire and Northamptonshire. The varied wetland habitat now includes wet woodland and reedbeds, pools and scrapes. This new terrain is designed to attract a range of wetland birds, and two hides, yet to be built, are also included in the plan. Specially designed ponds have also been excavated and planted for Great Crested Newts and a purpose-built bat house has been constructed to replace existing roosts across the site.

With environmental issues now firmly under the spotlight, this type of 'compensatory mitigation', also referred to as 'biodiversity offsetting', is now commonplace and provides a mechanism for maintaining or enhancing environmental values in situations where development is being planned, despite detrimental environmental impacts. Biodiversity offsetting is understood to be a last resort in a mitigation hierarchy, to be adopted only after all measures have been taken to avoid and minimise these impacts and to rehabilitate or restore biodiversity on-site.

While this may be the end game, the intervening period, as a site goes through different phases of development, is an interesting one, initially involving rapid changes in habitat followed by natural ecological succession over a longer period. This is particularly evident in large, 'slow-burn' building projects in which construction can take place over several years after the initial groundwork has been completed. 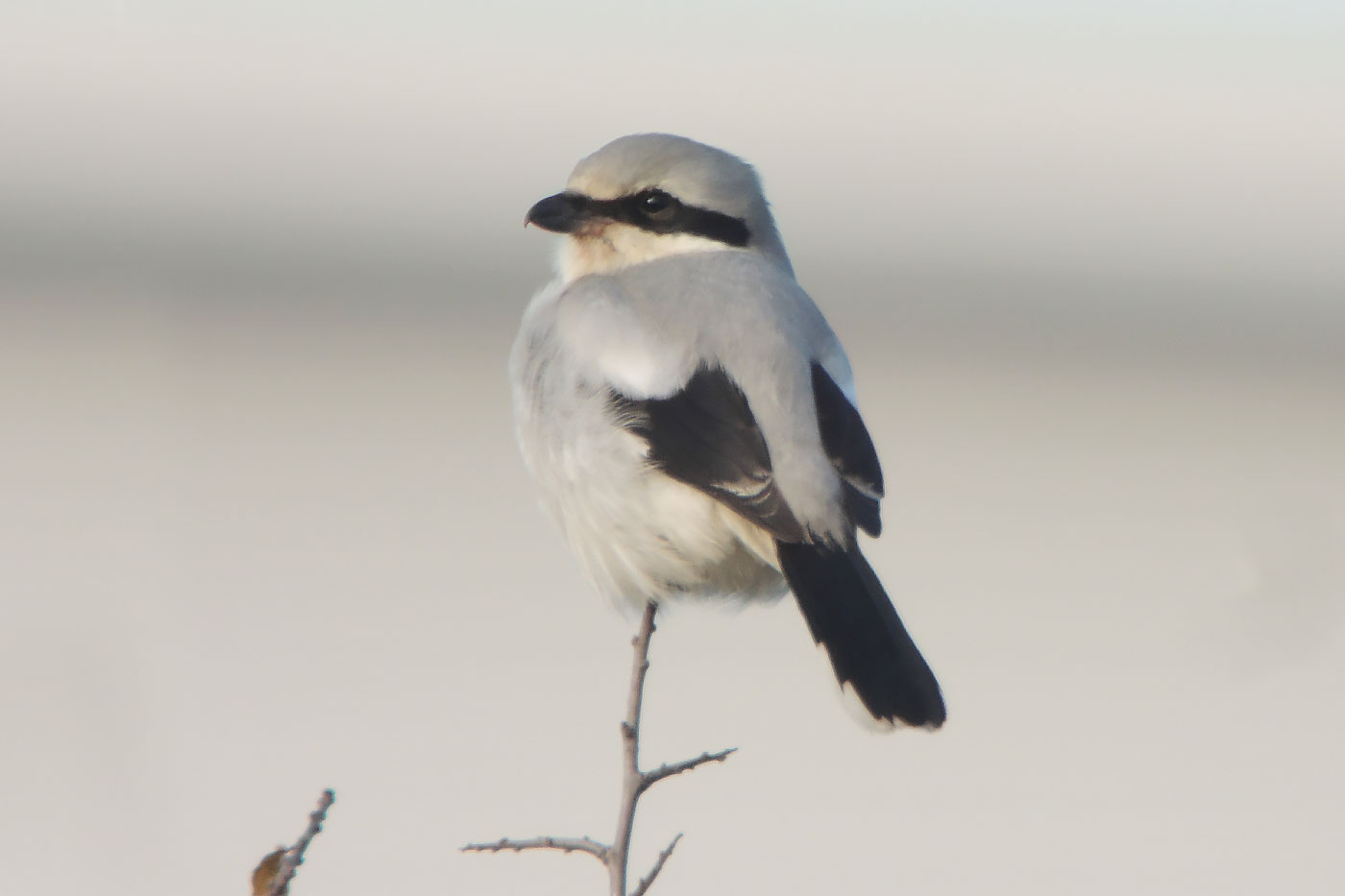 Great Grey Shrikes can turn up in the most unlikely places, especially on passage. This bird was present at DIRFT for much of winter 2019-20 (Mike Alibone).

The above process sees topsoil removed and storage bunds created, which provide areas for the growth of vegetation and feeding for insects, mammals and birds. For a large-scale project, it is not unusual for up to 500,000 cubic metres of earth to be moved in this way, staying in place for the length of the project and often beyond.

Once levelling of the site is well underway, as a spin-off, some sizeable shallow lagoons and pools are often inadvertently created as a result of standing rainwater on the flat earth surfaces. How long they remain depends on any number of factors, but while present, they are worth watching.

Since recognising the short-term value of this type of habitat, my own experience of regularly visiting and scanning local construction sites has produced some very interesting birds – particularly during spring and autumn passage. 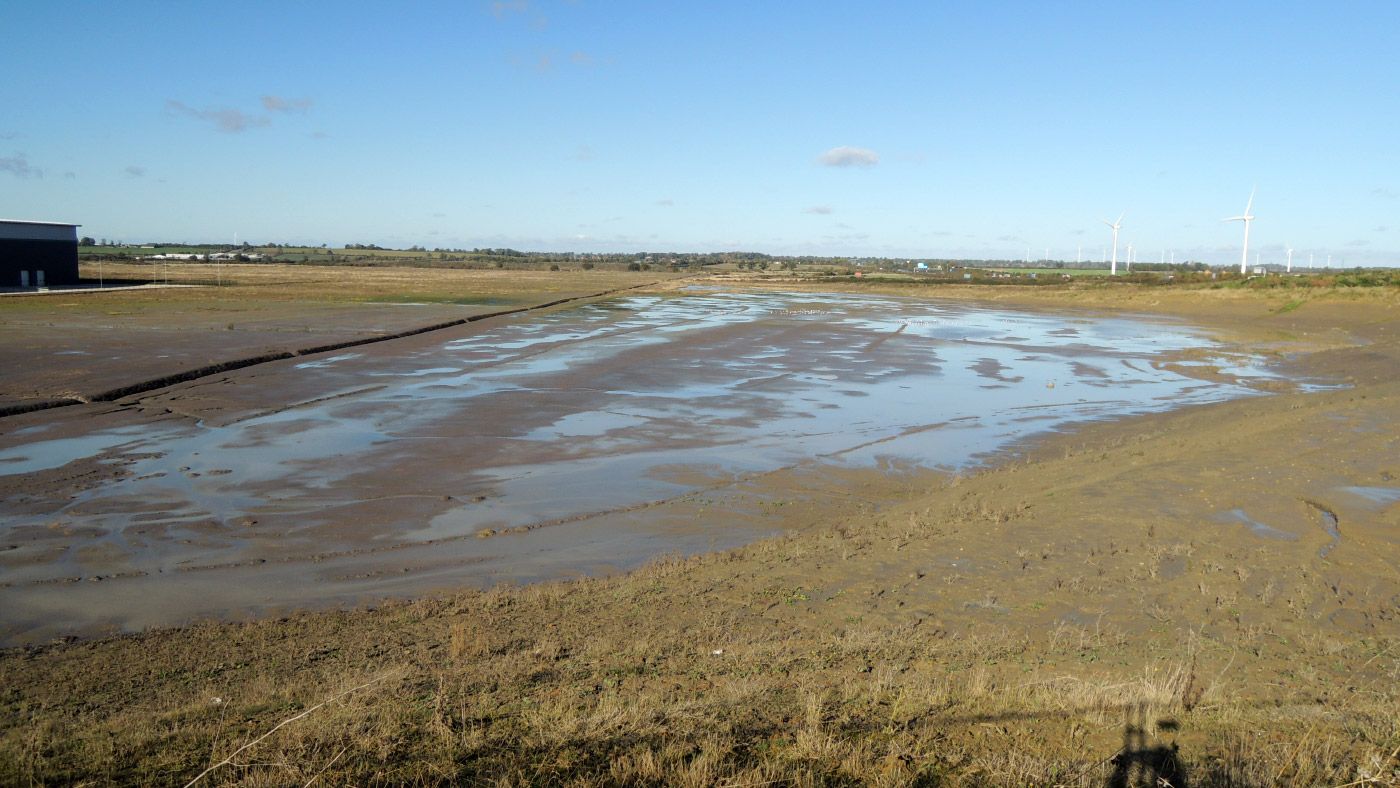 Developments like the DIRFT complex can make an ever-changing landscape that proves attractive to a variety of species (Mike Alibone).

Aside from the aforementioned gulls at DIRFT, where I have since added Glaucous to the tally, the site has also attracted other winter visitors, including Dark-bellied Brent Goose, Hen Harrier and Short-eared Owl – the last showing up from late autumn onwards.

Waders, too, will take advantage of this transitional habitat. I have seen small flocks of Dunlin drop in during spring, as well as Eurasian Curlew, European Golden, Ringed and Little Ringed Plovers. Both species of ringed plover – especially the latter – will take advantage of the change in habitat to breed and I have found them holding territory on several 'mature' industrial estates which are still in the process of long-term development.

More permanent bodies of water are intentionally created on sites in the form of balancing ponds, which are routinely excavated at site perimeters to catch run-off water. One such example can be found at Panattoni Park, an industrial site in the early stages of development by multi-disciplinary main contractor Winvic Construction Ltd, at Junction 16 of the M1 motorway in Northamptonshire.

In quieter periods, with little construction traffic and earth-moving equipment, this pond has proved to be a haven for Common and Black-headed Gulls and on one of my visits I discovered a crisp, first-winter Mediterranean Gull among them. Also present were Green and Common Sandpipers, and on a couple of visits to the site, a Northern Wheatear was on a nearby bund, two European Stonechats were on fencework, while more than 30 European Golden Plovers occupied a recently levelled expanse of saturated ground.

Even smaller, suburban housing estate developments can bear fruit, too, as I discovered when stopping to scan a rainwater pool to find another Mediterranean Gull loafing among the Black-headeds and the site alive with Pied Wagtails and Meadow Pipits. 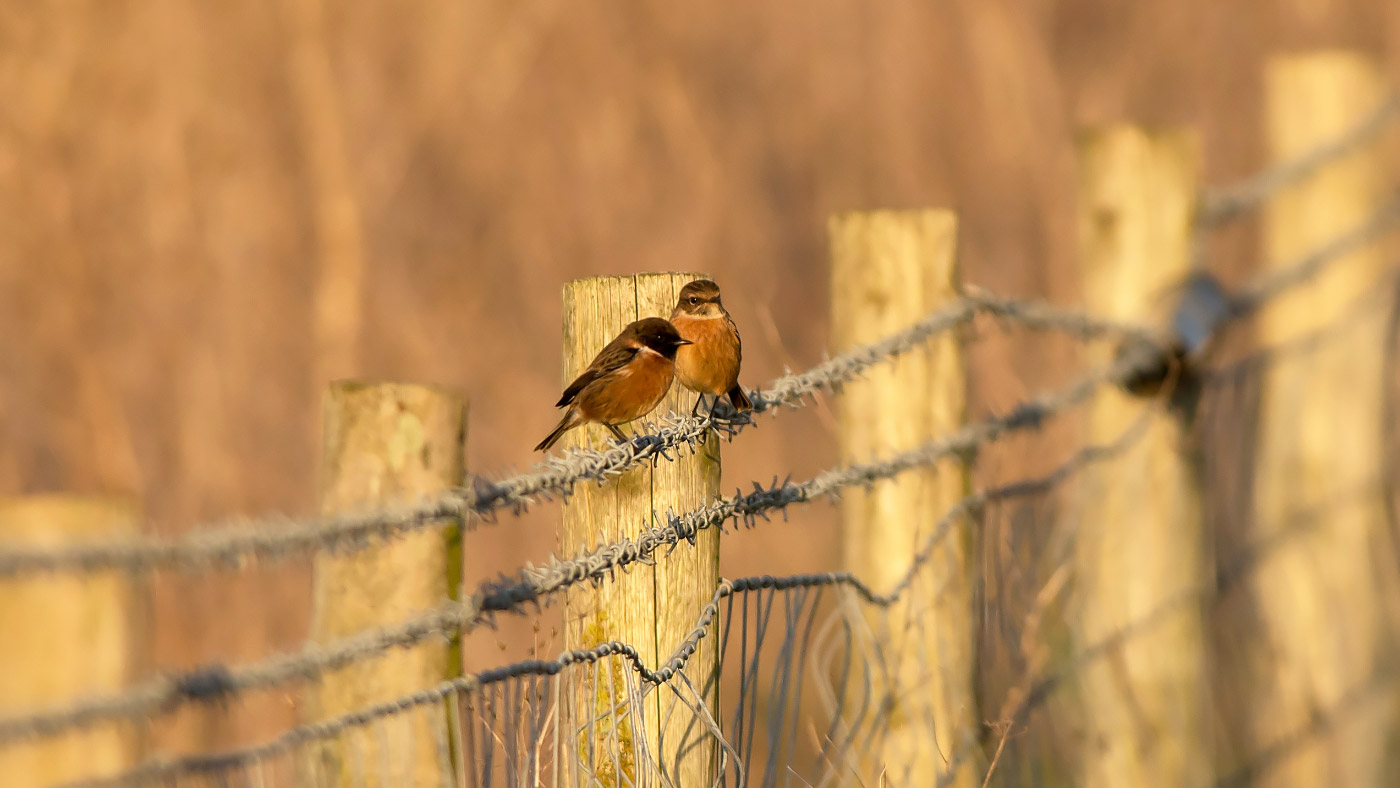 European Stonechats will take advantage of ephemeral habitats, particularly outside of the breeding season (Lisa Geoghegan).

For urban birders, even city centre developments, such as the construction of two new apartment blocks and refurbishment of an existing warehouse by Winvic on behalf of IM Properties, in Birmingham's Newhall Square, can have their upside. This particular development included the installation of 22 'swift boxes', after which the developer organised the playing of Common Swift calls for up to 2 hours per day to encourage their occupation.

The same main contractor hails as the UK's top 'shed specialist' and constructs a wide range of modern industrial units on distribution and logistics parks. In so doing, it creates extensive wildflower meadows, as well as planting native woodland and hedges and training members of its workforce to become wildlife officers to keep species logs of birds visiting sites. 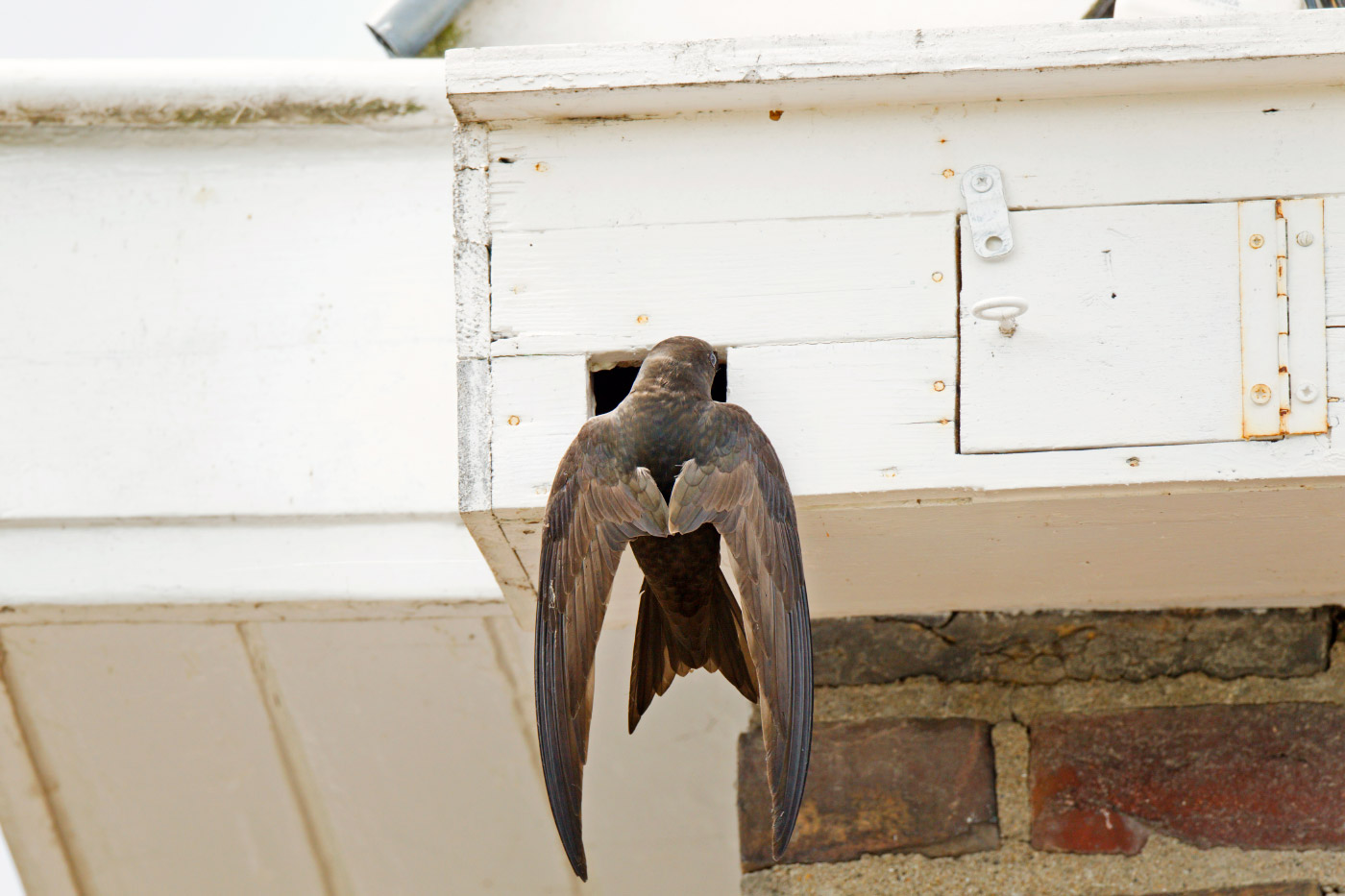 One successful means of mitigating for construction work is to include 'swift boxes' on new housing developments, encouraging Common Swifts to nest (Ran Schols / www.agami.nl).

Prologis also continues to carry out similar environmentally friendly work, recently completing the regeneration of local amenity space as part of the development of Prologis Park in west London. More than 25 bird and bat boxes and hibernacula were positioned across the site, 250 trees and 750 linear metres of mixed native hedgerows have also been planted. As well as providing valuable food, shelter and nesting sites for birds, 6,800 square metres of mixed species-rich grassland was also  incorporated into the scheme, greatly enhancing biodiversity.

Back on my own Prologis patch at DIRFT, regular visits continue to pay dividends, the most recent of which was the discovery of a smart and unusually confiding Great Grey Shrike. Frequenting an overgrown, scrubby area in a corner between new and existing warehouses, it remained on site from November 2019 into January 2020 and provided a constant attraction for many admirers.

Hopefully the location will continue to attract birds and deliver more surprises for the foreseeable future, while commercial and industrial sites nationwide, both new and mature, should merit further attention. Remember the 2014-15 wintering Blyth's Pipit at Calder Business Park, near Wakefield, where an admixture of marsh and scrubland habitat had been allowed to develop? Now who would have predicted that? 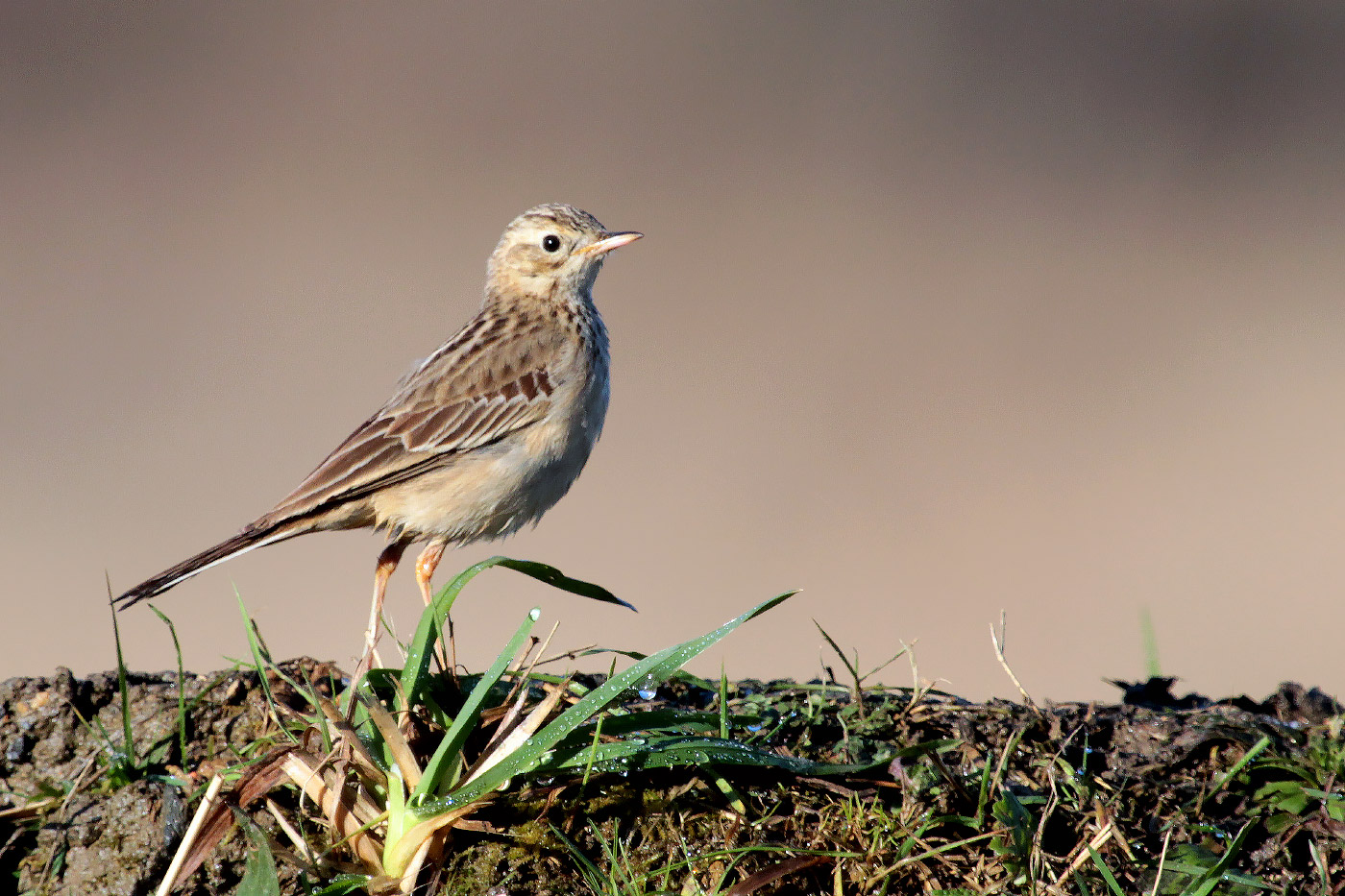 If you need any further encouragement to get out birding on building sites, keep in mind the 2014-15 wintering Blyth's Pipit at Calder Business Park, near Wakefield, West Yorks, on a mix of marsh and scrubland habitat (Darren Chapman).