The 22nd consecutive year of the Breeding Bird Survey (BBS) is just around the corner! We need volunteers who know their common birds by sight and sound to help monitor the UK's breeding birds.

Why? Well, it's two mornings out birding. Need I say any more? BTO staff members Nick Moran discovered breeding Redstarts on his Suffolk square and Dawn Balmer found a Grasshopper Warbler for the first time in 21 years of surveying her BBS square. As for me: well, nothing out of the ordinary at all, but I enjoyed being out birding all the same — any excuse!

There are some rather more scientific reasons to be taking part in the survey: the BBS is the main scheme for monitoring the population changes of the UK's common breeding birds and data from this scheme is used to flag up species in trouble, to influence policy and conservation action, and in a wide range of scientific research.

With over 20 years of data, the BBS has tracked the 83% decline in Willow Tit and 805% increase in Red Kite populations; these are just two examples of the 110 population trends calculated for species across the UK as a whole in 2013.

Recent research focused on the habitat-specific trends for individual species; these are included in the 2014 BirdTrends report. Some interesting information about Willow Warblers was revealed from this study! The species is increasing in grassland and heath but declining in urban/suburban areas and farmland. Willow Warbler trends also vary regionally across the UK, with a decline of 34% in England, increase of 29% in Scotland and a more stable picture elsewhere in the UK from 1995 to 2012. 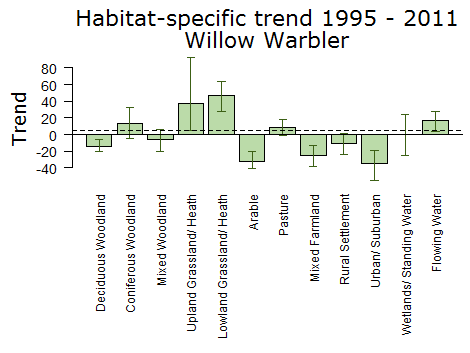 Last year's preliminary results from the Nest Record Scheme and Constant Effort Sites Scheme revealed that whilst adult abundance was low for Blackbirds and Reed Warblers compared to previous years, both had the highest productivity levels since CES began in 1983. Robins had both high adult abundance and productivity compared to previous years; as long as these cold snaps don't get too nasty for our resident species, could we see an increase in Robins on BBS squares this season? As for our summer migrants, we will have to wait and see how they got on during migration and in their wintering grounds.

There's only one way to find out: all it takes to be part of this long-term monitoring scheme is two visits to a randomly allocated 1-km BBS square and submitting your data online. If you are interested in taking part in the survey, please email bbs@bto.org or visit www.bto.org/bbs to find out more.

The BTO/JNCC/RSPB Breeding Bird Survey is run by the British Trust for Ornithology and is jointly funded by the British Trust for Ornithology, the Joint Nature Conservation Committee (on behalf of the Council for Nature Conservation and the Countryside, Natural England, Natural Resources Wales and Scottish Natural Heritage), and the Royal Society for the Protection of Birds.