Peter James Grant—Peter to his birdwatching friends, Jimmy to his family—is an ornithological product of the mid-1950s, when a mass of competent, schoolboy birdwatchers appeared on the London scene. This ornithological mass is now widely scattered throughout the world, but Peter is still very much a southeast England birdwatcher. Early in his ornithological career, he was not satisfied that others could identify a distant flock of Starlings whereas he could not—the most immediate discovery was his need to wear spectacles, and then followed a growing interest in identification problems. Surprisingly, during these early years, he was rather scornful of the written word (I think he possessed only one field guide and subscribed to no journals) and was certainly not a traveller—his birdwatching habitat developing from Beddington sewage farm to reach the dizzy heights of Greenwich Park and Dungeness. The results of his Greenwich Park studies have appeared in the London Bird Report (31: 64-92), a journal which he subsequently edited for three years (1969-71). 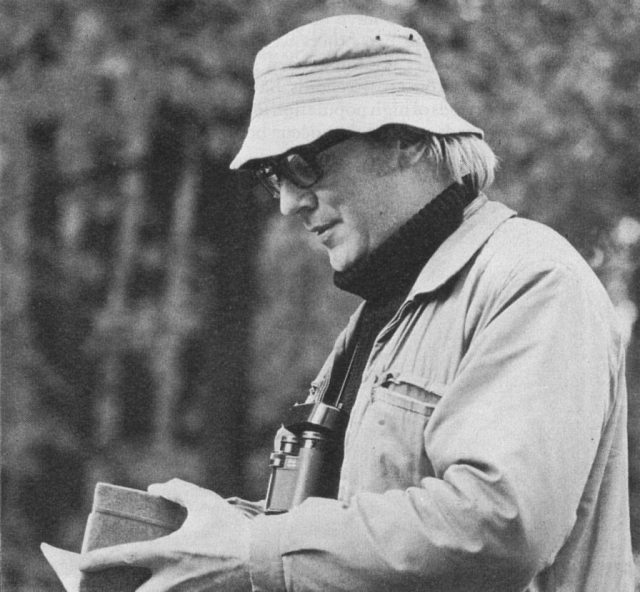 His recent appointment as chairman of the Rarities Committee is a natural extension of his love of identification problems, exemplified by his papers published in this journal (see Brit. Birds 69: 414-415). His first assessment of a rarity was when he doubted a radio disc jockey who claimed to have seen an albatross on the flagpole outside his studio window in London. In addition to Peter's letter, however, there were others (from less well-qualified listeners) supporting the identification—and over the radio waves came the suggestion that Mr Grant should put that in his pipe and smoke it!

It was on one of Peter's regular Dungeness visits that he met Denise, the girl whom he was to marry; they settled at Ashford in Kent, where the family now includes their daughter, Suzanne. From this Kent base, he follows his career as a highly successful representative for Johnson Wax Ltd, a position which creates the freedom and mobility that he loves, allowing time to maintain close ties with Dungeness Bird Observatory and the Kent Ornithological Society.

Since 1969, he has taken to travelling—a further extension of his desire to study and identify an ever increasing number of species likely to be seen in Britain. Birdwatching has taken him to four continents, including several trips to the United States, and his ability as a field man is tremendous. His natural tendency is to birdwatch alone, a habit which lends itself to his ability for quick field sketches, which he refers to as his 'ornithological shorthand'. His eye rarely lets him down; many times on Dungeness Point a bird has flown rapidly past and out has come Peter's notebook, resulting in a lightning sketch and the comment 'Did you notice how...?'

Among Peter's recent studies, he has found time over the past six years for detailed observations on the River Thames. He is a member of the Port of London Authority's committee on Thames conservation and has recently published (jointly with Dr J. G. Harrison) The Thames Transformed (1976), the story of the cleaning-up of the river and the dramatic return of wildlife that has followed.

I first met Richard Porter at Dungeness in 1958, on a Junior Bird Recorders' Club ringing course. He was small, very enthusiastic and had a crewcut. The crewcut went, but he is still small and even more enthusiastic.

Richard was born in London in 1943, and was a keen birdwatcher from a very early age, being an avid member of the JBRG, then the junior branch of the Royal Society for the Protection of Birds, whose members at that time included a number of other young men destined to become professionals in later life—Crispin Fisher, Nicholas Hammond and Peter Morgan spring to mind.

After leaving school, Richard embarked upon a course in food technology at Weybridge, which he claims was called a sandwich course, and lasted a year. He abandoned plans to enter the lucrative world of food processing when he discovered that the industry's busiest time coincided with the autumn migration; he then entered a period of some uncertainty so far as his career was concerned. 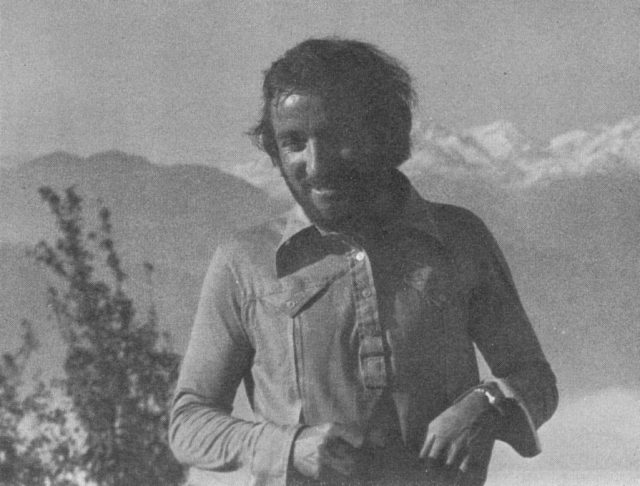 His first setback was when he failed an interview to be a dustman, which he considers must be some kind of record. He was, however, successful in becoming a stevedore, but, not feeling this to be his metier, moved on to equally rivetting jobs, all these being in the Brighton area so as to allow him maximum time for birdwatching along the Sussex coast. He became a photograph-trimmer, but was not cut out for this; a bread-stacker's assistant, but there was not enough dough in it; battery-filler; pitchstirrer; postman; and even, for a short time, a trainee underwriter at Lloyds, when he became a commuter to London for several months.

A long-planned eight-month trip to Turkey in 1966, which included documenting the first-ever full autumn's count of soaring birds over the Bosphorus, fired his enthusiasm for that country, and led to his finding the kind of employment he needed—working part-time in Turkey for the International Council for Bird Preservation, and for the rest of the year in Britain for the RSPB, which he joined full-time in 1970.

As the RSPB's Investigations Officer ('The Sandy Sleuth', as one newspaper dubbed him), he travelled extensively in Britain, enforcing the bird protection acts. His work on Turkish birds can scarcely have received a warmer plaudit than that from a member of his audience, when he addressed the annual conference of the British Trust for Ornithology in 1967, who said that 'He speaks very good English for a Turk.'

Richard's enthusiasm, dedication and hard work are well known, and there are few areas of national ornithology in which he has not been active. He has served on the Selsey Bill Committee, Cape Clear Bird Observatory Council, Sussex Ornithological Society Records Committee, Seabird Group Council and BTO Council. He was founder and first secretary of the Ornithological Society of Turkey, and co-editor of its bird report; this work culminated in his co-authorship of the widely-acclaimed series of papers in this journal, subsequently published as the book Flight Identification of European Raptors (1974), which has made his name known throughout Europe. He is now devoting more and more of his time to the international scene.

Currently the RSPB's regional officer for southeast England, Richard is a direct and forceful character, who has an ability to get on well with everybody. He is, above all, a very practical conservationist and a man who gets things done. 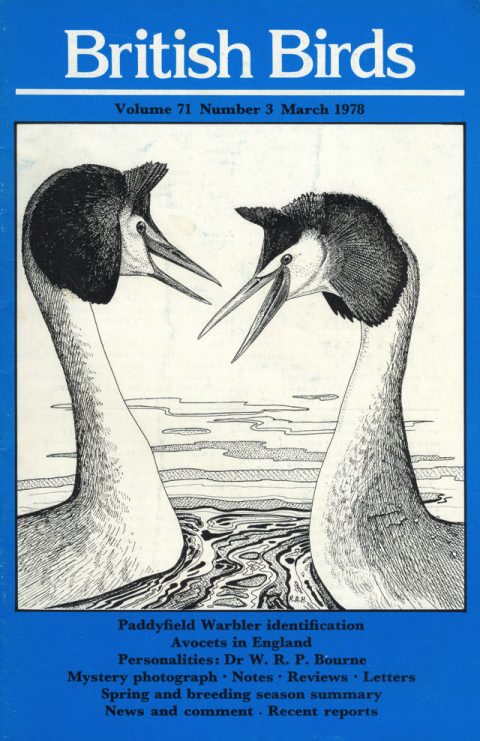 Personalities It is a well known fact that the nature of most human beings is partly good and partly bad, and that entirely good ones or entirely bad ones are rather scarce. This should apply equally to ornithologists. However, since British Birds started its series on 'Personalities', statistics seem to have run wild: within a year I have, to my increasing astonishment, been introduced to no less than ten men who, through their genuine kindness, infectious sense of humour, inexhaustible enthusiasm, boundless energy, high moral standards and extreme general competence, all seem to qualify for more or less instant beatification. This has restored my faith in humanity!

In contrast, some ornithologists which I have personally come to know—admittedly, here in Sweden—sometimes drink too much, one or two may have a taste for other people's wives, and a few even write papers of less than eternal value. At least in most cases, however, their bad manners are partly offset by virtues of one kind or another, which makes them reasonably acceptable as human beings. But of course, how much nicer would it not have been if they had all been pure white, like their colleagues presented in British Birds!

For a change, why not let the next ten 'Personalities' be treated by their worst enemies. Would that make any difference?

We do ask the biographers to emulate Lely's portrait of Oliver Cromwell, but, on the whole, we have tended to avoid featuring incompetent, drunken ornithologists in 'Personalities'; regrettably, we do not always know of our colleagues' extra-marital activities. We do, however, note that we have already included profiles of people (1) who criticised inefficiency bluntly; (2) who failed an interview to become a dustman; (3) who regards spotting watchable women as good sport on long car journeys; (4) who often delivers manuscripts late and becomes impatient at unnecessary delays; (5) who may seem somewhat overbearing; and (6) who eats MPs' pot-plants and whose driving skill is to be avoided at all costs. We do admit that this leaves four personalities featured in 1977 who were apparent paragons; only one of them is actually faultless, and he has blackmailed us into not revealing his name.