For the first time ever, over 3,500 maps showing the distribution, range change and abundance for over five hundred different species of bird that have been recorded in Britain and Ireland since 1968 are freely available online. Those for the Corncrake show the huge range loss that the species has experienced since 1968, while those for the Gadwall show its spread out from eastern areas. The spectacular recovery of the Marsh Harrier, which was down to a single breeding pair in the early 1970s, is the perfect illustration of the importance of collecting and storing data over time. 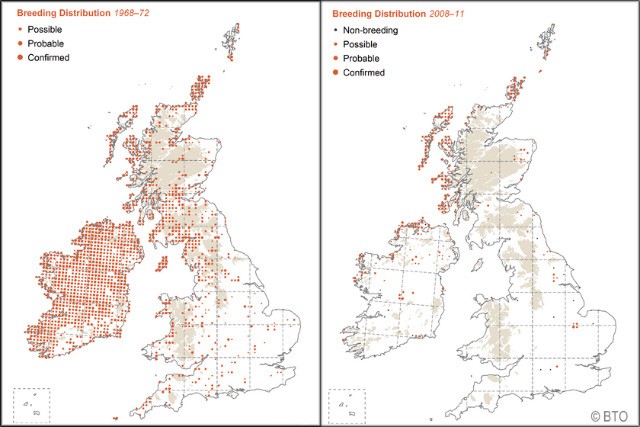 This striking comparison of graphs, taken from the BTO's new online Mapstore, illustrates the drastic range contraction of Corncrake between 1968-72 and 2008-11 across Britain and Ireland.

This huge resource has been produced by the British Trust for Ornithology (BTO), based on bird records collected by volunteers for bird atlas projects run in partnership with BirdWatch Ireland and the Scottish Ornithologists' Club (SOC) over a period of more than 40 years. Dr Simon Gillings, BTO lead scientist on the project, said: "To finally see all these maps in one place is tremendous but it is the ability to toggle between different maps for a species and see its range shrinking or expanding before your eyes that really brings home how some of these species are changing. These maps raise many questions, many of which are addressed in detail in the published bird atlases, but we still have much to learn."

Chris McInerny, President of the SOC, commented: "This wonderful resource emphasises the importance of data collecting over a long period, and the crucial role that it plays in understanding the plight of birds. We very much hope these maps will encourage more people in the future to contribute to recording birds in the UK and Ireland."

Olivia Crowe of BirdWatch Ireland added: "This fantastic online resource helps to spread the word about some of the incredible changes that have taken place with our avifauna. We are really excited about its potential as an educational tool, and in raising awareness about the status of birds in Ireland, especially those such as breeding Curlew and Yellowhammer, among many others that are in serious need of conservation action."

For further information and to see the maps please visit Bird Atlas Mapstore at www.bto.org/mapstore.