The story of one of the birds of 2022 ultimately had a sad ending, though for Charlie Birtles (CB) and Paul Baker (PB) their epic discovery will live long in the memory ...

PB: During our stay in Shetland, which began on 25 September, my usual routine consisted of leaving at first light to bird the surrounding areas of the digs, giving my partner Charlie the opportunity to have the morning for herself. With the weather mainly from the west, common migrants had been in short supply.

On Friday 7 October, when news broke that a second Myrtle Warbler had been found, it was a chance too good to overlook. On arrival, we decided to take another glance at the original bird first. After filling my boots, it seemed only appropriate to enjoy the second warbler. As I watched it, a few birders started arriving and it was at this time I decided to check my phone.

CB: Paul had mentioned that, with the arrival of a second American landbird in the Bigton area, something else could be lurking in the south-west corner from Scousburgh to Maywick. Little did I know what I was about to find as I decided to go off for my usual wander.

I set off up the road in the car, past Geosetter towards Scousburgh, when I spotted a beach cove up ahead. I headed in its general direction, turning right. As I pulled up outside the hide for Loch of Spiggie, I recognised where I was and decided to walk on down the flooded track to Scousburgh Sands.

As I walked towards the cove, past an upturned skiff, I was caught off-guard by an unusual bird sat right out in the open, basking in the sunshine. I was struck by its stillness. I tried to snap a picture on my phone, given I'd left the car with no bins or camera, but the quality wasn't great as I zoomed in to avoid spooking the bird. I sent it through to Paul and, after waiting a couple of minutes with no reply, then tried to ring him. No answer. 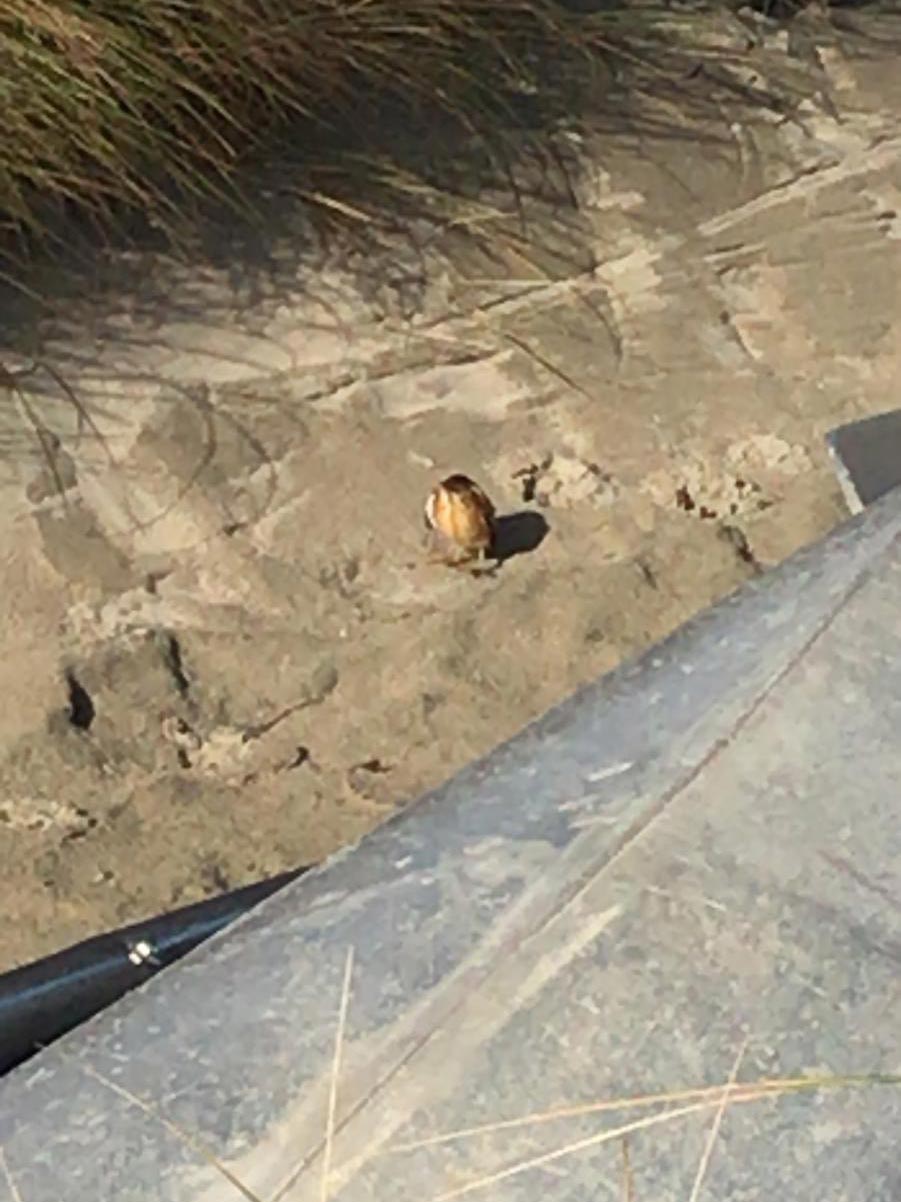 An initial phone photo of the Least Bittern (Charlie Birtles).

I stood for a while watching the bird and, as I did, I became more convinced I had happened upon something good. I continued to try to get hold of Paul on the phone with little success (as per usual!).

Having been as still as a statue up to this point, the bird moved for the first time as a walker appeared from the beach cove with two Labradors, spreading its wings and hissing aggressively to warn them off as they passed by. It was at this point I noticed its long, streaked neck for the first time. I recognised it as being bittern-like in appearance but knew the size of the bird was much smaller than Eurasian Bittern; it was more akin to Green Heron or Little Bittern, which I'd seen previously in the UK.

Weighing up what to do, I found myself running to the car. I made the decision that I needed to get Paul to identify what I had found. At the moment he finally returned my call, I'd reached the car and a plan was made to race to get him.

PB: As I looked at my phone, awaiting me were 14 missed calls and some grainy photos. Before I had time to even process the situation, I was frantically dialling back. As I stormed up to Bigton Community Hall, the designated pick-up spot, there was little time to think and pure adrenaline had set in. By the time I had arrived, Charlie was already pulling up.

CB: The car journey was tense. On arrival at Spiggie, we headed with pace to Scousburgh Sands. After spotting a white car that was now parked down the track, we were approached by Bert Mitchell, who had seen the bird. Unaware of the chaos that had ensued, Steve Keightley and Bert had pulled into the car park and seen the bittern, just as I had. At this point, the bird had moved to the east side of the car park but was still visible.

PB: At first sight, I was trembling. Standing in front of me was a tiny heron with rusty chestnut wings and distinct pale buff wing coverts. Its back and mantle were a mixture of rufous-orange with black feathers emerging through, alongside bright yellow legs and bill. Its overall hunched appearance contributed to its miniature stature.

Adrenaline had got the better of me by this point and time seemed to go slower. At that moment I felt the weight of every birder's wildest dreams flooding down on me as I voiced that Charlie had unwittingly found a Least Bittern – a first for Britain! A bird that seemed unimaginable to see here was stood just metres away. 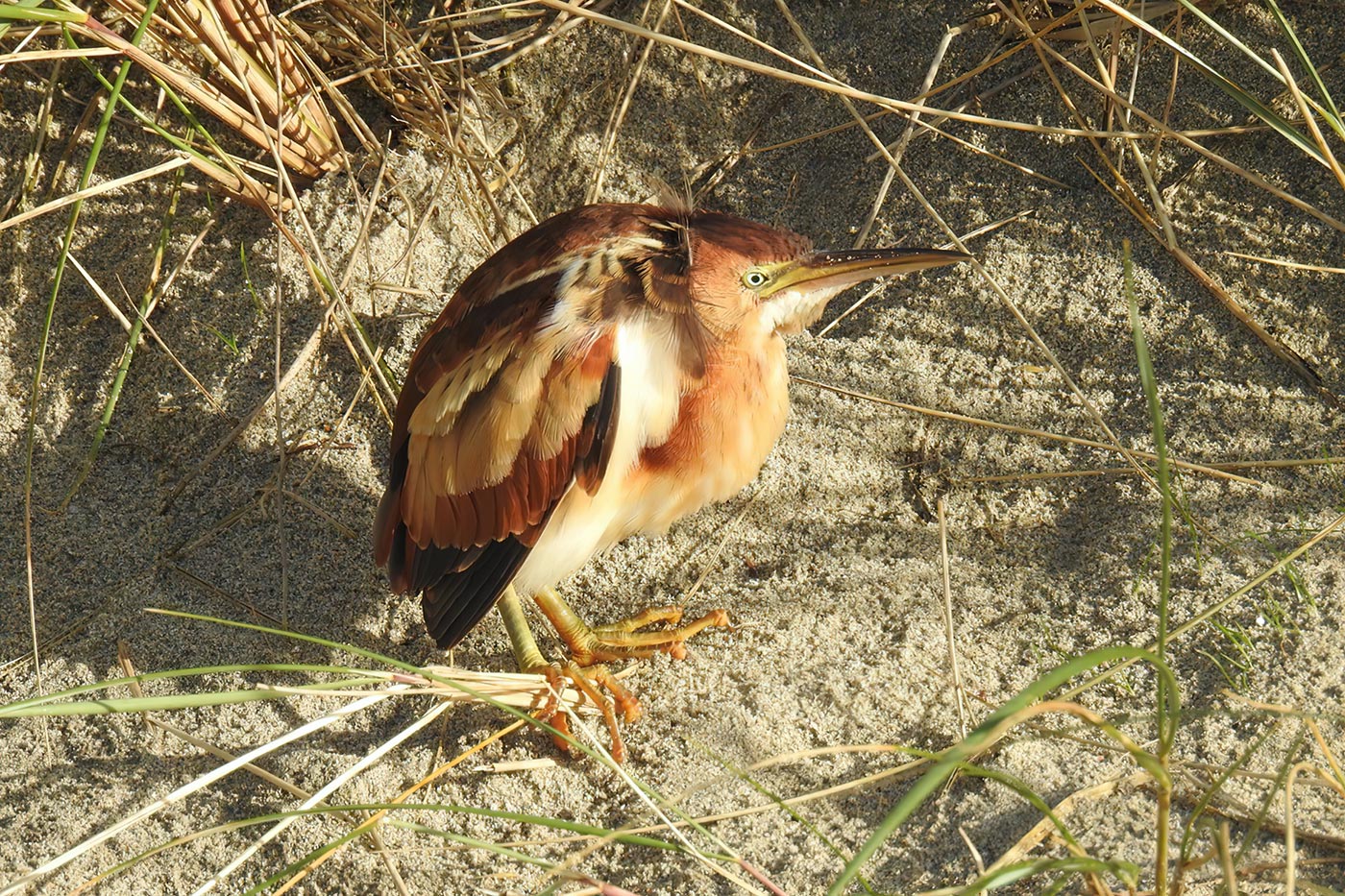 The Least Bittern posed out in the open for a time before walking off into the marram grass (Paul Baker).

It was a team effort thereafter. Steve quickly took to the local WhatsApp groups, while I scrambled for my phone to notify Sam Viles at BirdGuides to break the news – let's just say it wouldn't be appropriate to write his reply on this report! No sooner had the alert gone live than the first of many birders began arriving, at which time the bird took a few steps and hunkered down in the marram grass where it remained.

Both: Within an hour of the news breaking, the weather turned and the bird was taken into care. Despite efforts, the journey across the Atlantic proved too much and sadly it died overnight. An unhappy end for what was an incredible experience. 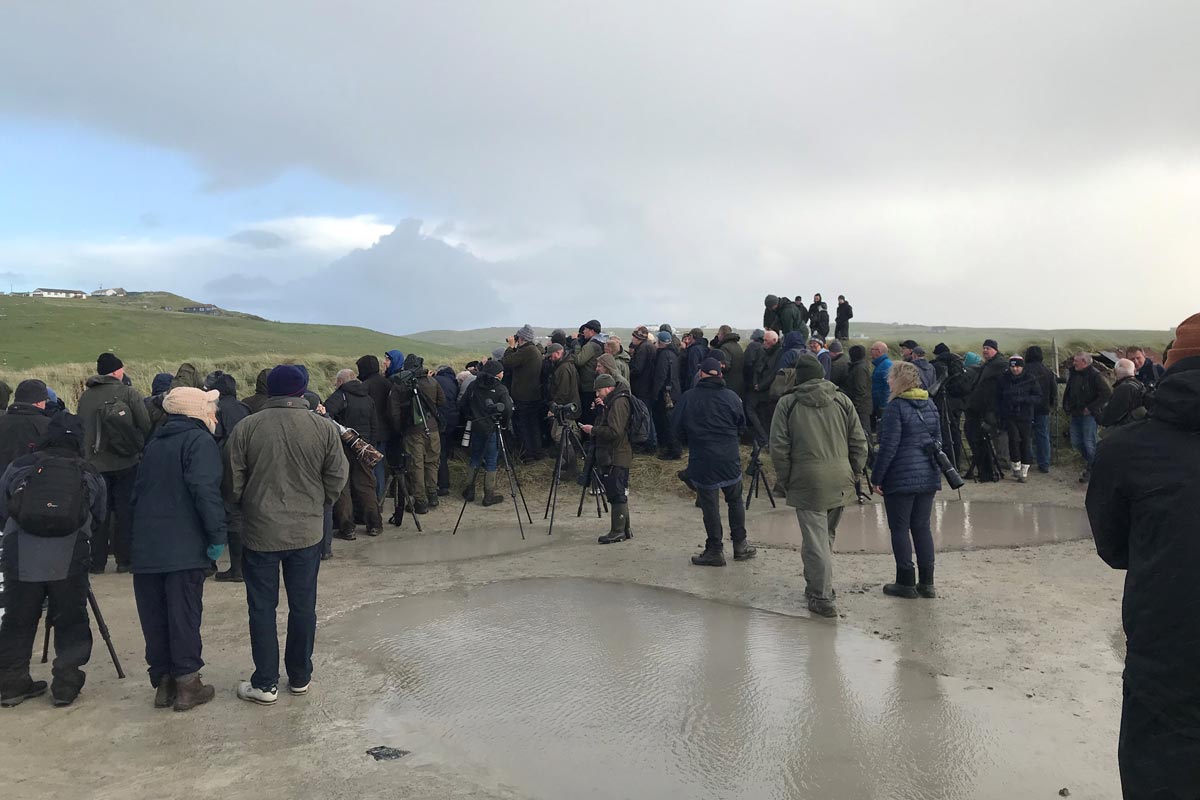 The bird was taken into care and found to be severely underweight. Unfortunately, it perished overnight (Tom Hines).