Being the warden of the Bird Observatory on Bardsey means spending day after day wandering round the island counting common birds with the hope of finding the occasional rare bird. Autumn 2003 was not one of the best years on record for the island, with Great Snipe, American Black Tern and Olive-backed Pipit the only real rarities seen. So, on Monday 10 November I left a fairly quiet Bardsey Island (which I had been on since July) to attend a meeting on the mainland the following weekend. The weather forecast for the following week was rather poor with gale warnings issued for the weekend so my only chance to get off was on the mail boat. Having left the island I spent the night in Pwllheli, the small port town where the ferry to, and from, Bardsey sails.

The following morning David Barnden, the island's tenant farmer called me just after 8 am and told me that he did not want to spoil my time off the island but he had some bad news for me. I wondered if the strong winds and rough sea had washed away one of the hides again, or the roof had blown off the house. However, when I asked what was wrong he replied 'I've just seen an American Robin at Nant'. Not wanting to believe him I jokingly asked 'does it look like the one in Mary Poppins?' to which he replied 'yes, red breast, white eye-ring and everything!'. My heart sank. Then the bad news came 'its still very windy here and there's no chance of a boat'. Dave said he had only seen the bird for 30 seconds but he was sure that was what the bird was and he was going back out armed with scope and camera to get some photos. I ended my call with Dave and put the news out to local birders and to Birdline Wales and BirdGuides.

Attempts were made to get a helicopter to take a few of us back to the island from Caernarfon but to no avail and the sea area forecast given by the met office for the following 24 hours was for strong south and south east winds. I spoke with the island's boatman who was sure there was no way he would sail the following day having seen the forecast. This was a total disaster, a new bird for the island, a British tick for me and I was stuck at the wrong side of Bardsey sound. Emma, my girlfriend, tried to make things seem better by trying to convince me that 'at least its been seen and if Dave wasn't there, there would be no record of it at all'. This did not cheer me up any! I still needed to see the bird myself. So, on the strength of the conversation with the boatman about the rough weather I decided to make my way to Southport with Emma and our son to stay with her parents overnight and try to get a helicopter from Liverpool. Again though no-one wanted to carry us to the island.

That night the Bardsey Island trust were telling interested parties who wished to travel to the island that a decision would be made at 8.30 am as to whether the boat would sail the following day due to the uncertainty of the weather forecast. At 8 am on Tuesday morning Dave Barnden called me to tell me he had just seen the bird again and there was no wind and the sea was calm enough for the boat to cross. The news was again released immediately to BirdGuides and Birdline Wales and Emma and I were bundling our 18-month-old son back into the car and were back on the road heading to Aberdaron to catch the 11am sailing.

We travelled over to the island with 12 other birders and made our way along the west coast to the bottom of a small slope where the bird had frequented the previous day. Dave and Libby (his wife) told us all what the bird had been doing and where it spent the previous day. After about 20 minutes with nothing other than a Song Thrush and a few of the local Choughs to see a feeling of desperation began to move across the gathered birders. As time was not on our side and we only had another hour left on the island Dave offered to wander round and see if the bird was sheltering behind any of the small walls, which it occasionally hid behind the previous day and sometimes spent up to an hour just sitting still. After about five minutes Dave appeared at the top of the rise waving his arms: the bird was still there!

Within minutes 14 birders had crammed into the tiny kitchen of Hendy croft house and were fighting to get a view of the bird through one small window of 150-year-old distorted glass! The bird was eventually seen by everyone but very poorly and very briefly before it flew over the wall into the next garden. The bird then flew over to a small withy bed and another small garden where, after a while, it showed very well at a range of about 30 metres for a few minutes. The bird then left the garden and headed back towards the area it had favoured the previous day. Total disaster had turned to total joy as the 14 of us all had one 'Yank Robin' firmly under our belts and most importantly the warden of the Observatory had it on his island list! We then had to leave the area and return to the boat, leaving Dave and Libby on the island to enjoy the bird to themselves once again. Storm force winds on the 13th made the chance of a boat crossing impossible even if the bird had been relocated.

This is the 20th record of American Robin for Britain with a further ten records of this striking thrush seen in Ireland. The last record in the UK was on Scilly from 16th to 19th October 1998, but the last truly twitchable one was as long ago as Christmas Eve 1988 in Inverbervie, Northeast Scotland, which stayed to 29th December.

I would like to thank on behalf of the lucky few who made the journey to the island, Tony Bruce and Garralt Hews, the crew of Highlander II, for carrying us to the island, the office staff of Bardsey Island Trust for organising the crossing and allowing access to the island during their 'closed season', and to Dave and Libby Barnden for finding the bird and keeping watch on it until birders managed to get across.

Anyone wishing to stay at the Observatory and maybe get a chance to find a mega such as American Robin or another Summer Tanager can visit our web site at www.bbfo.org.uk, or can get details about staying in the comfortable centrally heated observatory from Mrs Alicia Normand on: 01626 773908 or email Bob&lis@solfach.freeserve.co.uk.
Written by: Steve Stansfield, Warden, Bardsey Bird and Field Observatory 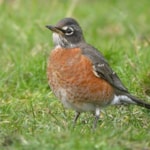