Black-throated Trogon is a widespread species occurring throughout much of Central and South America where it is commonly found in lowland forest and second growth. Current global taxonomies are unanimous in treating it as a single polytypic species with six subspecies; however, a recent study suggests that multiple species may be involved.

Combining morphological, bioacoustic and molecular data, Dickens et al (2021) conclude that four of the current subspecies should be elevated to species, while a hitherto unnamed taxon in the Atlantic Forest of north-east Brazil also deserves species status (making five in total). Pending acceptance and adoption by global taxonomies, the five species they propose are discussed below, along with their distributions to help birders identify which species they may have seen on their travels. The English names used are those suggested by the paper's authors; given the names' oftentimes clumsy length and, in one case, the using of an eponym, it is perhaps unlikely these will be the final names adopted by taxonomic authorities. 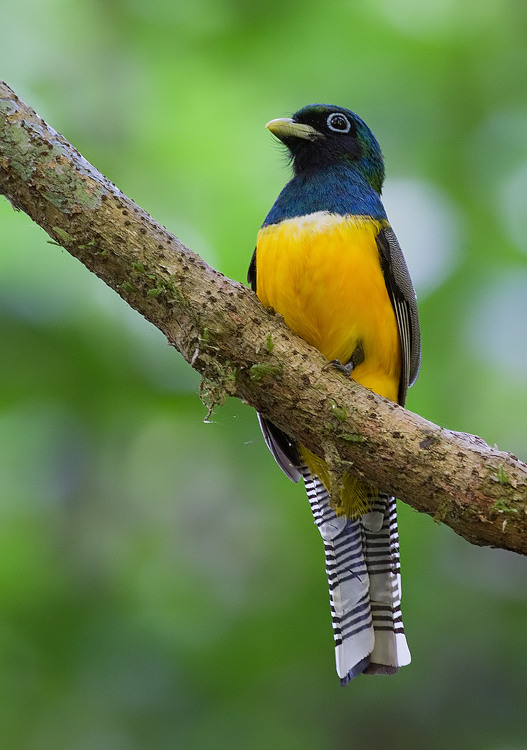 Distribution: the only member of the complex to occur in Central America, all observations in Honduras, Nicaragua, Costa Rica and Panama refer to this taxon; it also occurs in north-westernmost Colombia.

Additional notes: this species abruptly meets the next at the Darién Gap, Colombia, where the authors found no evidence of intermediates. The two differ quite significantly in undertail pattern and song, and diverged some 3 million years ago.

Distribution: a species with a typically Amazonian distribution with too many sites of likely encounter to list here. All sightings from Venezuala, Guyana, Suriname, French Guiana, Peru, east Ecuador (east of Quito), south-east Colombia (east of the Andes), and Amazonian Brazil (i.e. away from the Atlantic Forest) refer to this species.

Distribution: an Atlantic Forest endemic, from Bahia to Rio Grande do Sul (Brazil), and west to north-east Argentina and east Paraguay. The number of sites where birders may have seen this species is too long to list here, however all sightings from Paraguay and Argentina pertain to this taxon, and the vast majority (including all of those around Rio de Janeiro and São Paulo) of those from Brazil's Atlantic Forest do too (with Alagoas being the only exception: see below).

Additional notes: this is a new taxon described in the paper under discussion, which the authors suggest deserves species status. With only two specimens available to them (one of which was a sub-adult), and measurements of a third ringed individual, the diagnosis of this population is relatively weak and, in many respects, appears intermediate between Southern Black-throated Trogon and subspecies of Amazonian Black-throated Trogon (molecular and plumage data align it closely with the former, bioacoustic data with the latter). Genetically, it is divergent from Southern by just 0.7-0.9% ND2 (which, incidentally, is less than the divergences between populations of Amazonian Black-throated Trogon, which the authors regard as subspecies).

Critically, this taxon has a tiny range and population. Known from only a single site (Estação Ecológica de Murici, Alagoas), the authors estimate its population to number fewer than 90 pairs across <30 km2 of remnant forest. Several other species in this region have recently become extinct (Pernambuco Pygmy Owl, last recorded in 2001; Cryptic Treehunter, last observed in 2007; and Alagoas Foliage-gleaner, last observed in 2011) and the authors rightly urge additional action to safeguard Alagoas Black-throated Trogon, and other Alagoas endemics. 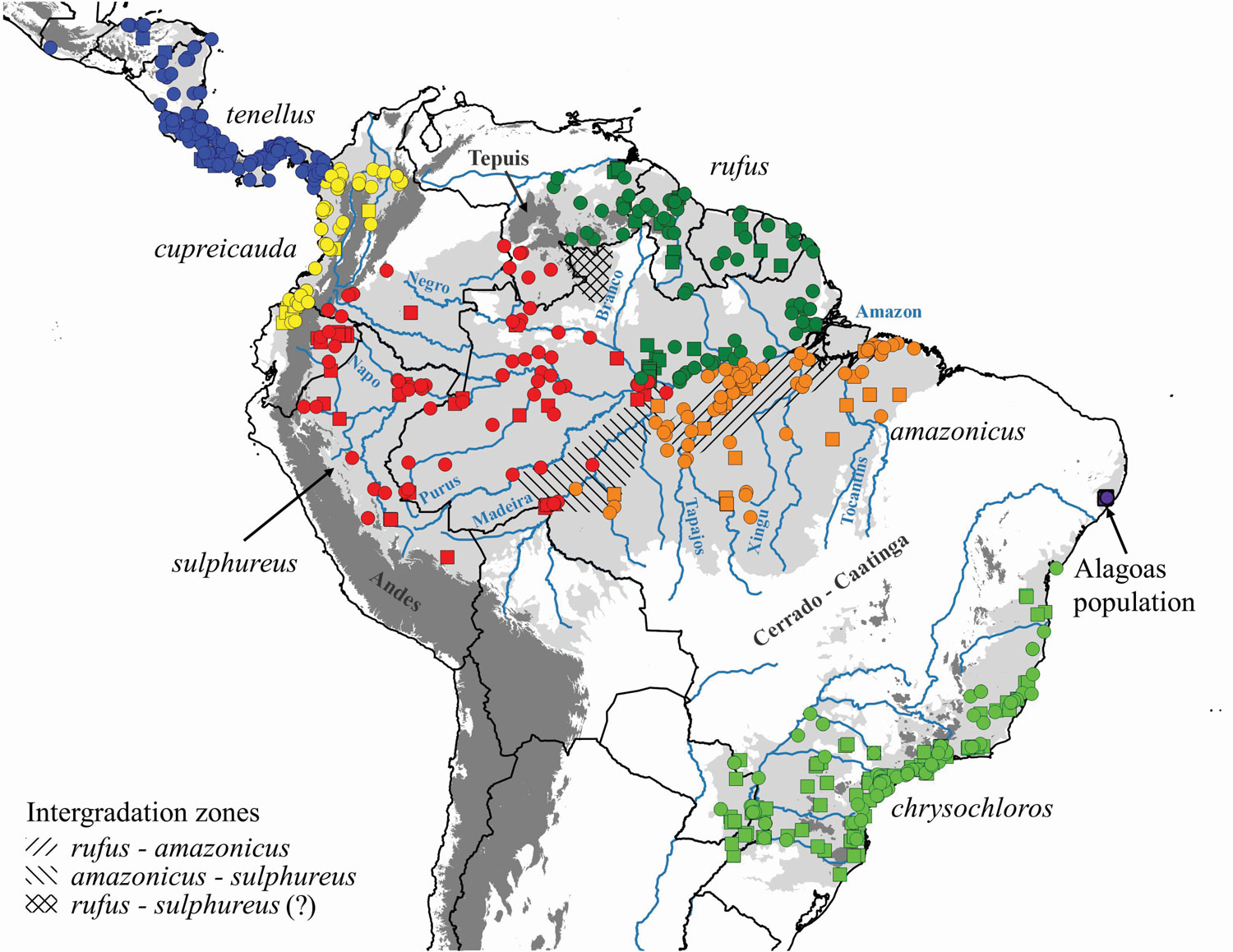 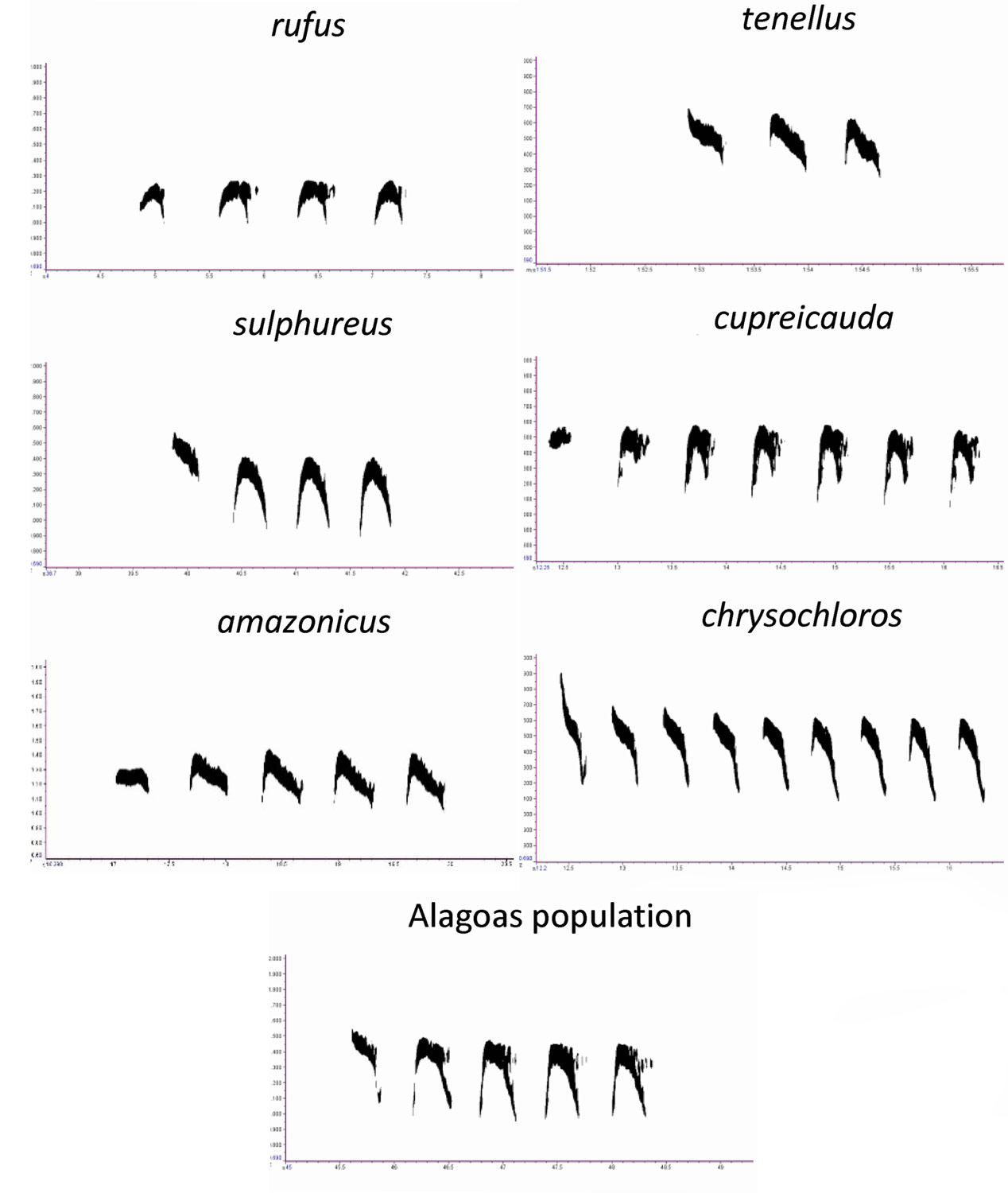 Sonograms of typical songs of each taxon/population of 'Black-throated Trogon'; adapted from Figure 4, Dickens et al 2021.