Birding in the wake of a storm

The perpetual fickleness of the British Isles' climate means that no two years are meteorologically alike. Winter provides a fine illustration of this, with the colder months notorious for their contrasting and variable weather. Some years are settled yet very cold, while others can be really quite mild or, as with last 2013–14, nothing short of chaotic, with transatlantic depressions bringing fierce storms our way.

This in turn tends to mean that our birdlife varies each winter. Freezing, settled conditions are conducive to Continental influxes of a wide range of birds, notably wildfowl and waders. Milder conditions, on the other hand, generally mean it is a much quieter time for cold-weather species but instead can encourage a host of autumn migrants to attempt to overwinter. Throw storms into the mix and the playing field changes once more.

Birding during these periods of inclement weather can be a real challenge. Conditions are testing to say the least, but braving the elements can be as rewarding as it is demanding. Strong winds equate to displaced birds throughout the seasons and the winter months are no exception. Experiencing a big storm is an exhilarating feeling, and some of the most exciting birding to be had on our shores occurs in their wake. With the first significant winter storm of the year having slammed into northern and western areas of the British Isles last week (and with more unsettled weather forecast to follow), we take a look at some of the species that typically occur during these unsettled periods.

Iceland and Glaucous Gulls are species synonymous with bouts of stormy winter weather. Numbers of both fluctuate year-on-year though influxes tend to correspond closely with unsettled conditions in the North Atlantic. Driven well to the south and east of their core winter range, these species arrive along our coasts both directly as a result of the prevailing conditions but also by following trawlers into our fishing ports. The arrival of a flock of 75 at Killybegs, Co Donegal, on 20 February 2002 vividly illustrates this and must have formed a quite amazing sight before they dispersed. 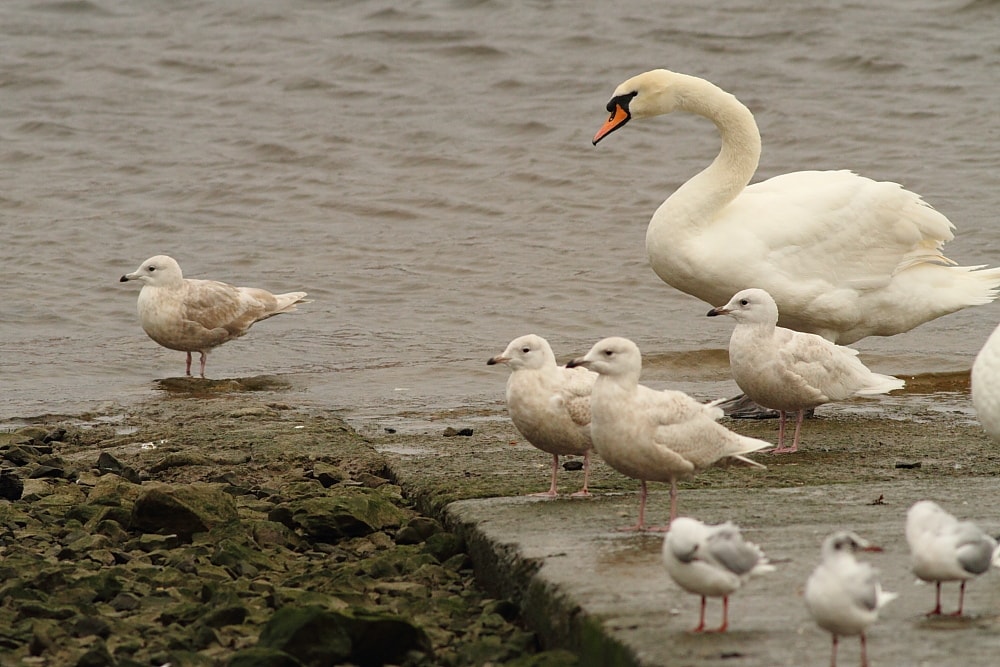 As the above count suggests, the highest counts always come from the northern and western peripheries of our isles; ports and harbours naturally attract concentrations of gulls and thus it's no great surprise that some of the largest counts on record have come from sites such as Stornoway Harbour, Lewis, and Lerwick Harbour, Shetland, as well as Killybegs. That said, birds may be found anywhere along western coasts and any concentrations of gulls are worth scrutinising — golf courses, fields, estuaries and beaches will often produce a 'winger' or two after a storm. 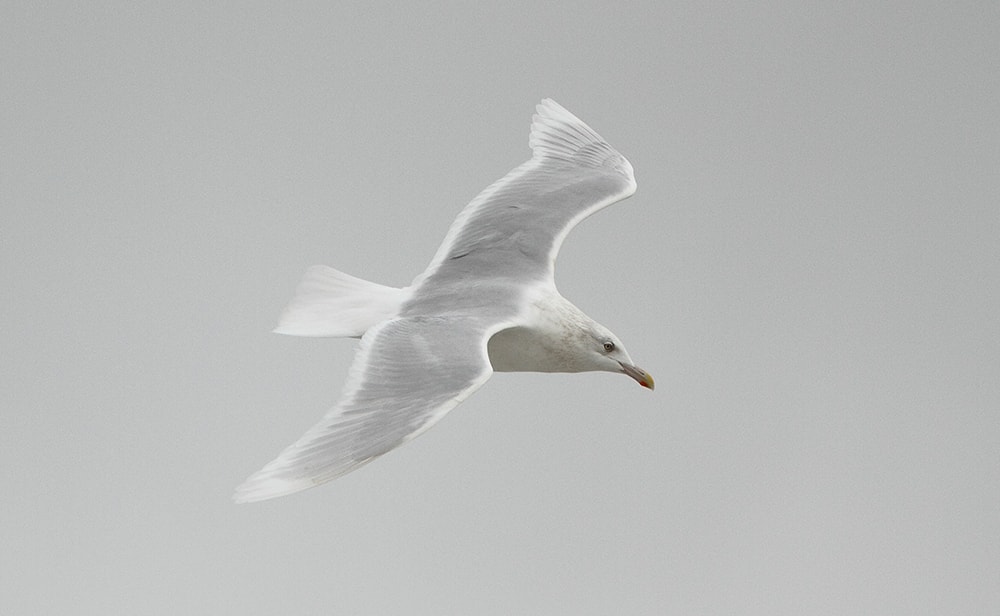 The origin of and path taken by transatlantic depressions inevitably decides the composition of white-winged gull influxes. In some years, such as 2011–12, Iceland Gulls numbers soar while Glaucous Gulls remain scarce. In others, the opposite can be true. Last winter it seemed that the white-winged gull influx was very much Nearctic in its origins, with Glaucous Gulls extremely numerous and Kumlien's Gulls appearing as commonplace as nominate Iceland Gulls. 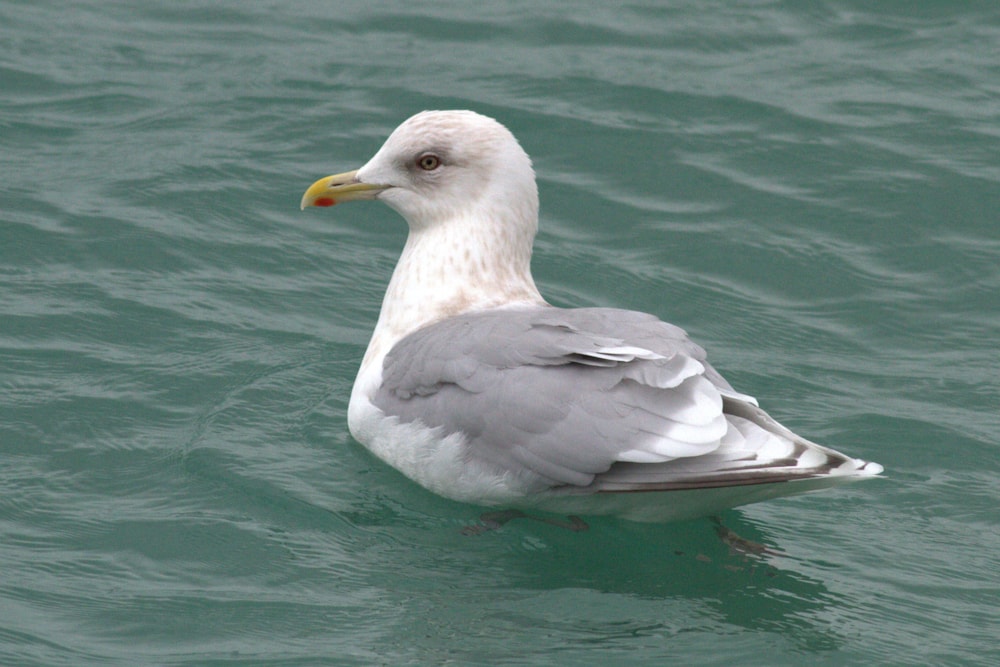 If Glaucous and Iceland Gulls are to be expected, then the real prizes are two truly Arctic-dwelling species: Ross's or Ivory Gulls. Both have traditionally been near-annual visitors to Britain & Ireland though records of the latter had become particularly few and far between until last winter's influx, when a sensational twelve individuals were recorded between late November and February. Harbours and estuaries tend to be preferred by the gorgeous, hyper-active Ross's Gulls, though Ivories are just as at home plucking about among a putrid carcass washed up on a beach — cetaceans are favoured though fish, seals and just about anything else will do. As well as all the Ivory Gulls, last winter also produced seven Ross's Gulls and it's a fair bet that a run of weather systems over the Christmas period could well deliver one or two of each in time for the start of 2015. 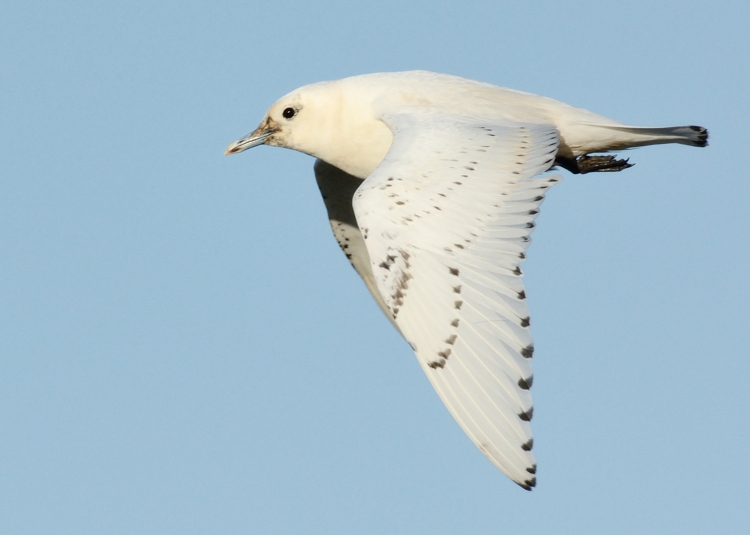 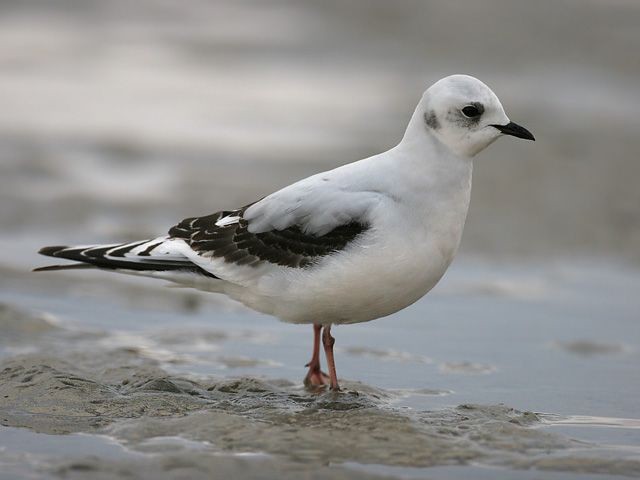 If a weather system originates on the eastern seaboard of North America then the spectrum of vagrants potentially caught up in its midst and swept across the Atlantic suddenly becomes altogether greater. Exciting Nearctic arrivals at such times might include Bonaparte's and American Herring Gulls as well as various wildfowl species, while rarer occurrences have included the likes of Killdeer, Thayer's Gull and American Robin. Despite new birds still turning up in Ireland on occasion, Forster's Tern has now tantalised British birders for over a decade, with the last widely twitchable bird present in Cornwall in November and December 2002 — there's no doubt that an accessible individual in the coming weeks would be hugely popular. It's also worth noting that Ring-billed Gull has become an increasingly rare bird in Britain since the turn of the century, though a single midwinter storm could easily remedy this waning trend.

Given that storms are at their rawest and most destructive in exposed, maritime areas it is our coasts that are naturally subjected to the greatest effects. As well as the various aforementioned gulls, a wide range of pelagic and coastal species are directly impacted by these periods of turbulent weather. Birds such as divers and grebes, auks and seaduck will all look to seek refuge in sheltered areas, and their relative safety makes natural and man-made harbours busy places at these times. This was particularly prominent during the incessant blows of last winter when sites such as Portland Harbour, Dorset, and Brixham Harbour, Devon, hosted a fantastic array of birds sheltering from the appalling conditions. For most sites, good local species such as Black-throated Diver, Red-necked Grebe and Black Guillemot are entirely realistic possibilities. White-billed Diver is more fanciful but, as Brixham proved last year, not out of the question. 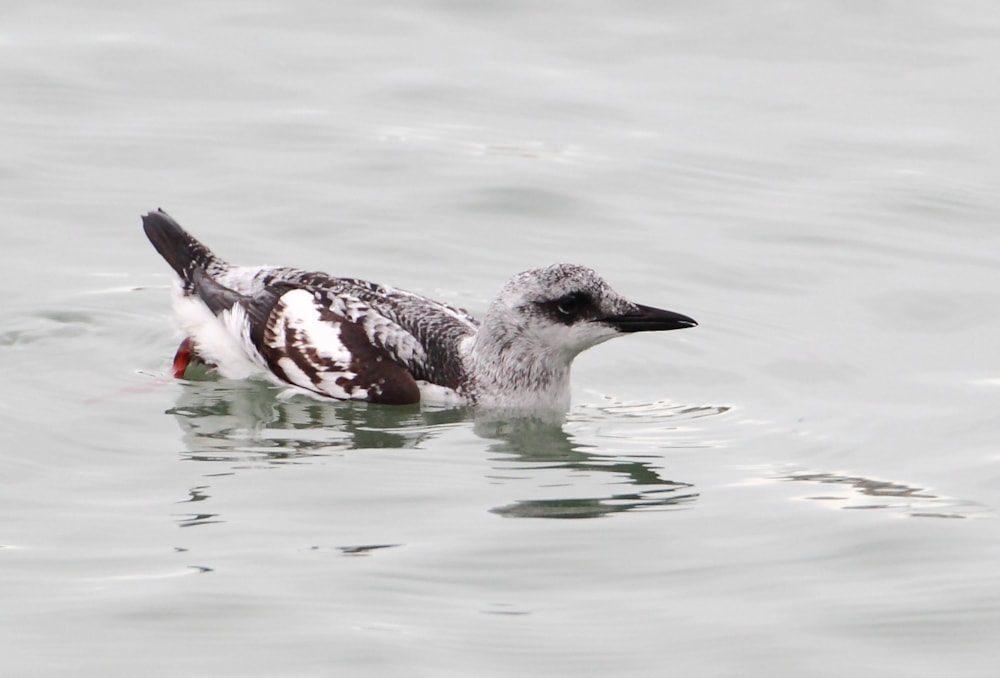 Though much emphasis is put on coastal birding during or after a winter storm, there is nevertheless scope for interesting inland records. Just as in autumn a deep depression can deliver a 'wreck' of Sabine's Gulls, Grey Phalaropes or Leach's Storm-petrels, a winter event can have a similar effect on a wide range of coastal species. Inclement conditions in the early part of winter are perhaps best for producing inland influxes of Great Northern Divers: for example, a series of deep depressions in late November and early December 2006 led to an impressive arrival across inland waterbodies, with up to seven birds at Rutland Water, threes at both Chasewater, Staffs, and Staines Reservoirs, Surrey, and ones and twos at many other sites. 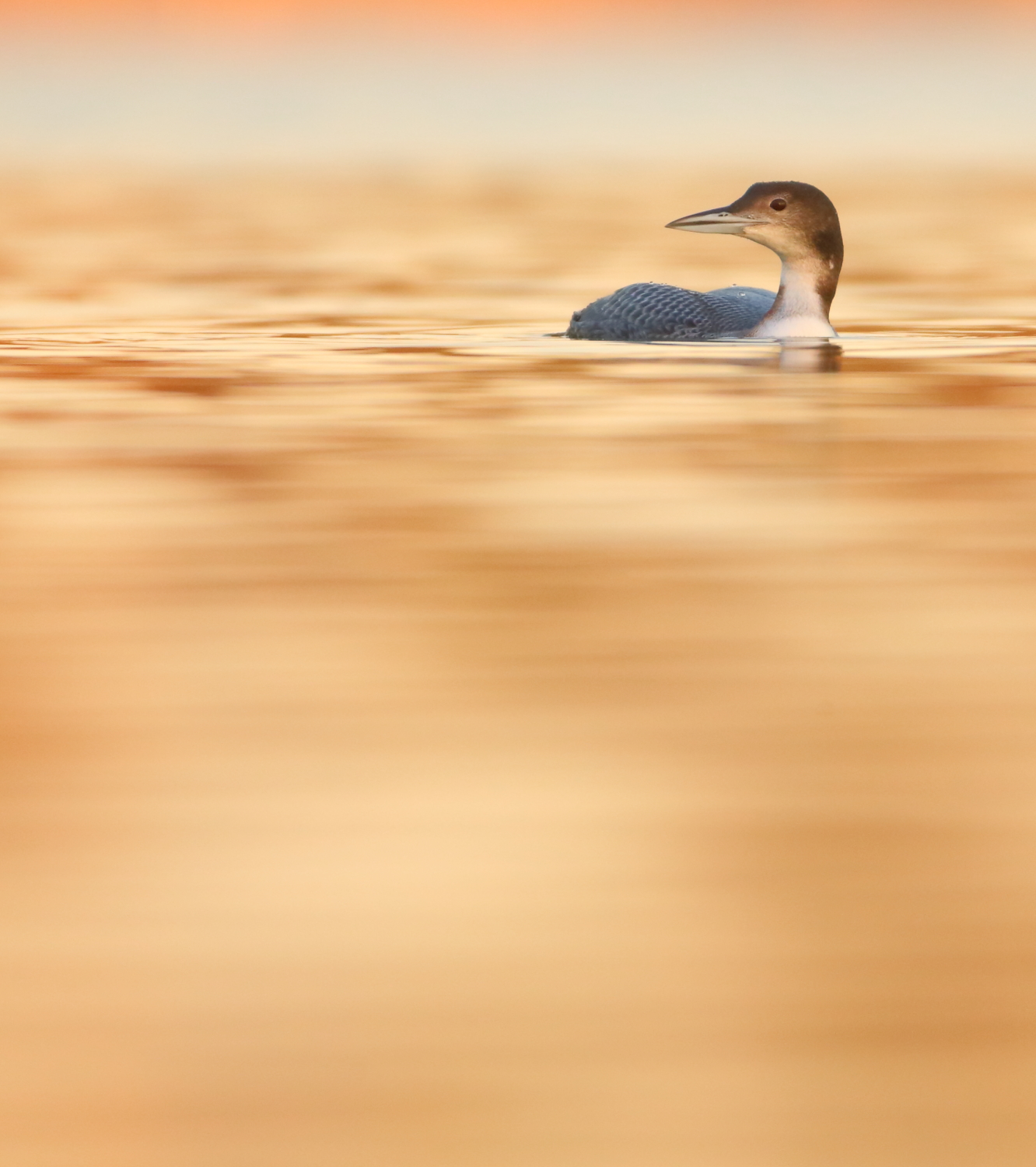 Though their effects are adverse and even sometimes damaging, stormy conditions nevertheless form an exciting part of winter birding in the British Isles. Their occurrence is potentially conducive to the arrival of wide range of exciting species, primarily non-passerines, on our shores and they also have a tendency to deliver the occasional vagrant more than capable of banishing the winter blues. And, as the now-famous Portland Harbour Brünnich's Guillemot of December 2013 proved, braving the elements at such times can have huge reward. With the festive period drawing ever closer, let us hope for that storm-driven waif to make it another Christmas to remember...