Being anything but the most sedentary birder is, more than ever, a position of potential moral conflict. The balance between dealing with the climate crisis, managing our own fulfilment and sometimes even supporting conservation is now familiar to us all. While sports, fashion and industry might make the effect of birders seem laughably insignificant, as key witnesses to our changing world, we really ought to set an example in the changes we make. The question is how.

Cycling and walking from home have seen huge uptake in the birding community. This makes total sense, with both approaches giving massive relief to the wallet and having absolutely zero impact on Earth's atmosphere. What's more, birding this way feels authentic; there's no purer glee than finding birds you used to drive for on a self-powered venture from home. Birding on foot or by pushbike suits covering a prescribed radius from home, say 5 km or 10 km, or if one or two local sites turn out to be honeypots worth checking regularly. Looking back over a year list built on foot or through pedal-power, feels properly earned – and guilt-free.

However, those surrounded by miles of concrete, or living far from anywhere productive or lively with birds, might not find self-powered birding all that fulfilling. It's equally understandable that even birders with the best lot locally will want a bigger adventure from time to time. We do only live once, after all. Surely we can continue to take the lead when it comes to a greener lifestyle, but still experience more than the few kilometres from home. 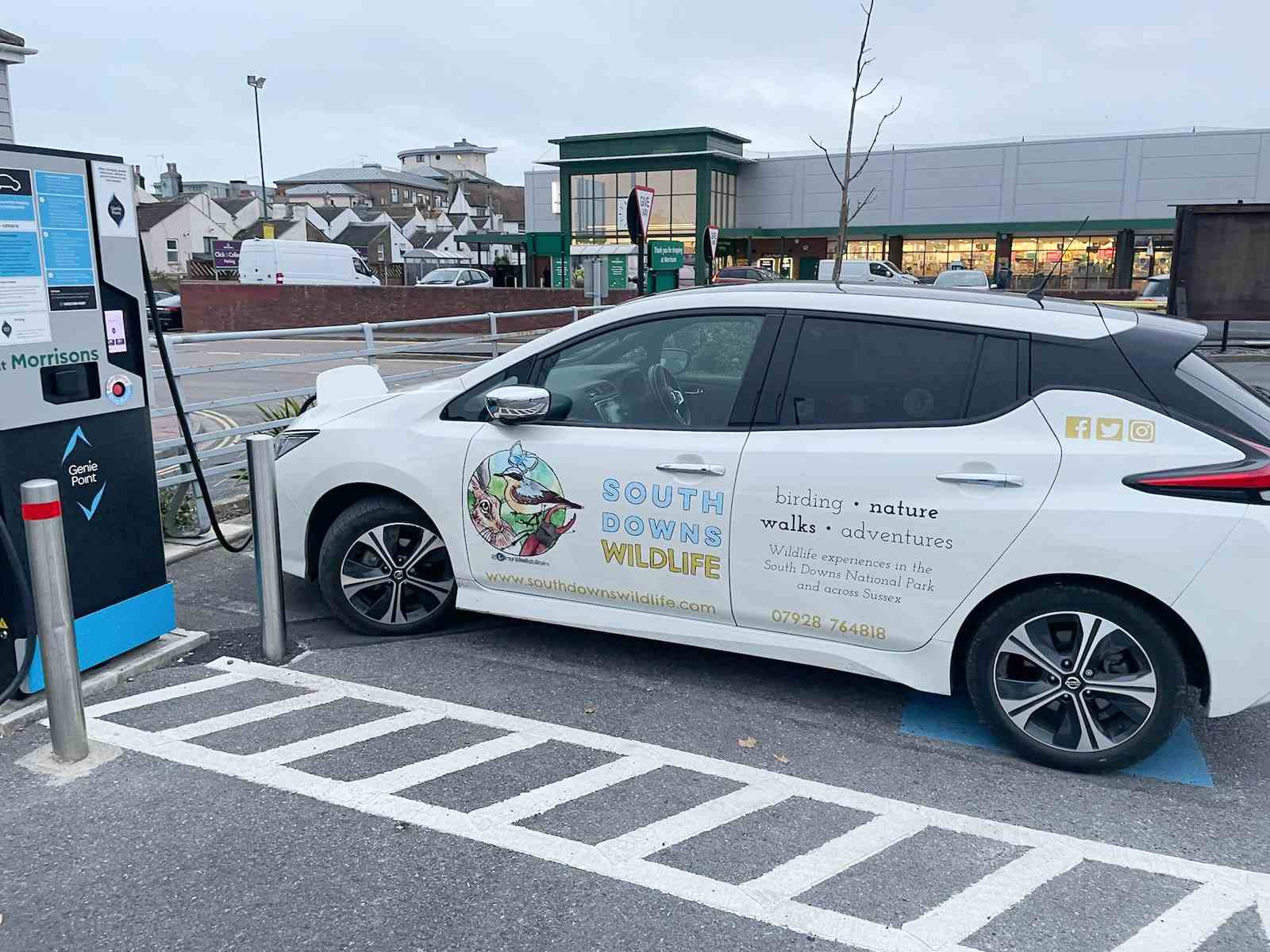 The author's electric car, which he invested in this autumn (David Campbell).

It's true that public transport can reshape one's birding horizons, with many amazing reserves accessible by train and bus – few areas are truly out of reach given an appropriate amount of planning and time. But it's time that we all seem short of. Lugging a tripod, telescope, camera and binoculars on busy coaches isn't always fun either, especially when the station near the reserve has a short platform and you're not in the front six.

Going by most discussions about birding and climate action online, you'd be forgiven for thinking that there isn't another answer. Electric vehicles (EVs) don't really get mentioned, and with public transport relatively unpopular with birders, it can seem like there are just two approaches to choose from: birding by bike or foot, or continuing pretty much as normal. This seems dangerous; we can't be expected to completely box up our wanderlust, but we need to change.

The environmental scoresheet of an EV is not flawless, and there's no pretending that they are a silver bullet to all our problems at this stage. However, there's overwhelming consensus that they're always cleaner than a traditional car and can be streets ahead, if drivers select green charging networks or charge at a home with a renewable energy supplier.

Most importantly, today's EVs are at the frontier of rapidly evolving technology which looks set to offer increasingly green private transport down the line. Getting rid of a heavily polluting car and replacing it with an EV is one of the only times it's more environmentally friendly to ditch and re-buy rather than wear something out.

I made the choice to get on board with EVs this autumn. For my circumstances, it seemed like the right way to do my bit. I was prepared to take range and charging time as factors in my journey planning, in order to be as environmentally friendly as possible without cutting myself out of wider British birding. In the same way as we can use our choices in the supermarket or at a restaurant to reflect our values, I bought an EV because I can see them becoming a cornerstone of sustainability.

What I hadn't quite appreciated until a few weeks with my new car was how few other birders have made the same choice. I started to wonder whether this meant something and I'd made a grave mistake. After going on my first long-distance electric trip to Spurn Bird Observatory, I learned that I was the first visitor to charge a vehicle there. I only had to stop to charge twice each way, with time folded on one stop of each leg by having a meal at the pub hosting the charger.

My second long-haul trip in the EV was rather different and one I relate in the interest of full disclosure. My urge to twitch has lessened in recent years but I couldn't resist the lure of the Varied Thrush on the Orkney island of Papa Westray, and I was intrigued to see how the car would face up to the challenge. 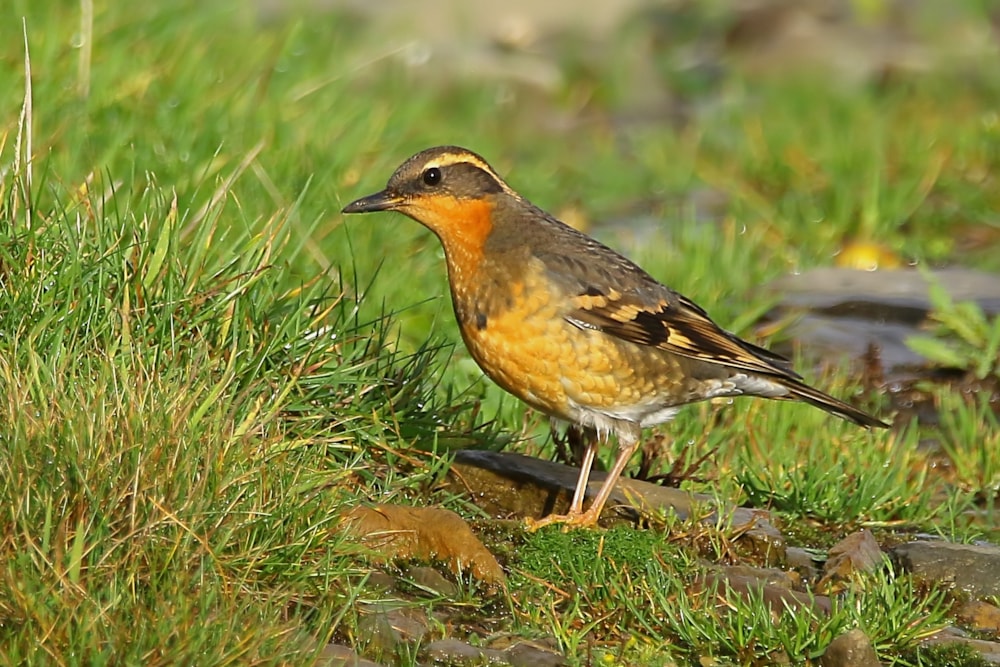 A brave attempt to twitch the Orkney Varied Thrush in an electric car ultimately ended in failure (Jaz Hughes).

Having banded together a carload of suitably open-minded, eager and optimistic birders, I planned a handful of partial charges along the route to get us to the Gills Bay ferry terminal as efficiently as possible and left home in the early hours. We allowed six hours extra time compared to a 'normal' 12-hour drive, which we hoped would give us time to make the charges, with a bit of leeway.

You know what they say about starting as you mean to go on? My normally reliable local charger – the first pick-up point – just wasn’t talking to my car so I had to rush up the road to the nearest alternative. In the meantime, my first phoneless passenger had arrived at the original unit, panicked that I was nowhere to be seen and woken my neighbours to track me down. Still, we could just afford to be half an hour behind schedule.

Two further charges were necessary before filling the final seat in Cheshire. The first unit was out of order, sending us on a lengthy diversion to its nearest neighbour. It wasn't the last panic of the night, with our next charging point turning out to be behind locked gates. By the time the two charges were under our belt, we were nearly two hours behind schedule and starting to lose our hair.

Somehow, we made it to the Cheshire just in time to still have a shot at making the ferry, were we in a normal car. There was no option but to bail out. The pick-up became a pile-out and the three of us bundled into Dan's more traditional vehicle. With a fair wind behind us and strong bladder control we made up enough time to just scrape check-in.

It was only after dipping the bird and being dropped back in Cheshire, that the nightmare really started. On the way home, chargers were variously out of order, already occupied or not accepting my card. To top it off, the one first-choice unit which did work then allowed my car to get cut off by another user while we were having coffee, blissfully unaware that we'd be coming back to a partially charged car.

Getting home never felt so glorious. I knew twitching in an EV would be a challenge, requiring solid patience and accepting lower odds of catching up with the bird, but the trip had genuinely shaken me. Due to time pressure and bad luck with the charging network, we'd been forced into driving at 50 mph on the motorway without heating in near-freezing temperatures between each charge in order to rinse out every possible mile. We prayed, on two separate occasions, as lorries overtook us, that we'd even make it to the next charger, the battery having hit zero. This was birding in the slow lane.

The experience left me with not a jot of doubt that long-distance twitching cannot currently be done in EVs. The charging infrastructure simply can't cater for hurried drives across the British Isles. To allow enough time for things going wrong, going all the way to the top of Scotland from Sussex might well have meant a 24-hour journey each way!

But does that mean going electric is off the table for birders? For anyone who isn't a hardcore twitcher, I really don't think so. I can tell you first-hand that EVs work superbly for county birding, having an ample range to cover a full and adventurous day in most counties, and comfortably getting you to any local rarities. If you have off-street parking, then you're good to go with a full battery each morning and a much cleaner conscience. If you don't have that luxury, there are a pleasing number of rapid chargers near known birding hot-spots and promising 'undiscovered' habitat. One of my local chargers is right by my local estuary and a short walk from one of the best seawatching spots along my stretch of coast. 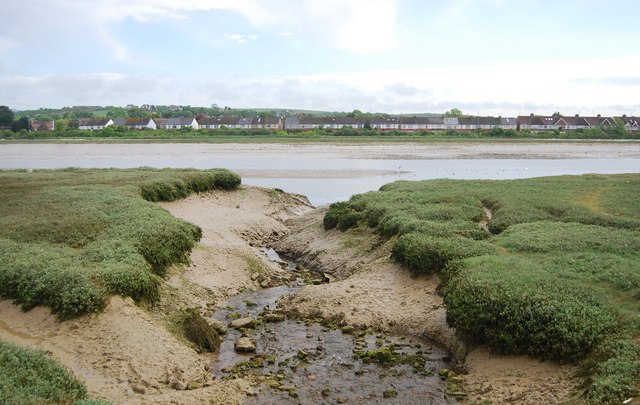 The Adur Estuary is right beside an charging point near David's home (N Chadwick).

There's no need to duck out of the British rarity game either, it just needs to be played differently with an EV. Pre-planned trips, allowing reasonable travel time, can be done with little stress. Taking a change of scene and booking a few days in a promising area at the right time is arguably a more rewarding way to build a list than simply waiting at home and twitching what comes up.

National-level EV birding requires a deeper level of involvement and planning, effectively meaning selecting arenas within which to find your own birds and twitch others'. There's nothing stopping EV birders booking out time to take breaks in Norfolk, Cornwall, the Yorkshire coast or even Shetland, for instance, and filling their boots. It may well lead you to consider visiting areas that wouldn't otherwise have been on your radar.

In an optimistic world with rapidly advancing technology, EVs are a serious option for birders who want to champion sustainability and to keep their horizons open. The switch requires personal adaptation but not at an unreasonable level, considering the climate crisis, and offers an interesting new approach to the hobby. Let's bring the EV into the conversation.