At the beginning of this year we decided to help raise the profile of bird crime by introducing a regular round-up to the webzine to summarise some of the key incidents that have occurred nationally, which we hope will prove a useful reference. Our second report covering the first two months of this year is detailed below.

We all want to play a part in reducing such crimes and bringing criminals to justice, so we'll continue to feature new incidents discovered in the previous month and updates on ongoing investigations. If you have an incident of bird crime that you want to share, you are welcome to email us.

In February we reported on the release of a video depicting a group of men visiting an active Goshawk nest site at Glenochty, Strathdon, attempting to destroy the nest by shooting at it from below. RSPB Scotland is now offering a reward of £1,000 for any information that subsequently leads to a successful conviction in this case.

Dr Barry O'Donoghue of the National Parks & Wildlife Service oversaw the satellite tracking project: "Knowing this bird since she was a tiny chick, and having followed her every movement remotely and in the field was a real privilege, enlightening and indeed humbling. Every time without fail, she lit up my eyes when her tag showed she was alive and well. It was heart-breaking to find this young bird when she had been shot. An individual that gave so much joy to thousands of people that followed her progress, killed in the prime of her health. This was not just one bird, but the hopes and dreams for a species that is vanishing from our country." 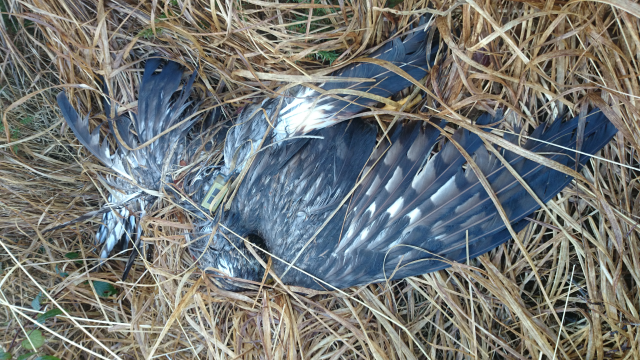 Perhaps one of the most shocking reports that emerged in early February was that a Little Bustard had been discovered dead on a road close to the village of Blofield, Norfolk. A post-mortem found that the bird had been shot with a shotgun (full story).

Mark Thomas, Senior Investigations Officer with the RSPB, commented: "Little Bustards are protected at all times of year and are the focus of intensive conservation efforts in the countries where they breed. Evidence suggests that this bird is likely to have died very close to the location where it was shot, although it is unknown how it ended up on a road near Blofield." 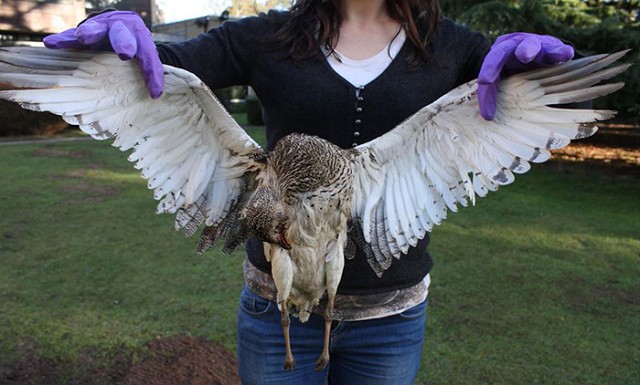 The Little Bustard found shot by the road near Blofield, Norfolk (Photo: RSPB)

One of the first bird crimes recorded in 2015 came on New Year's Day, when a stricken female Sparrowhawk was brought into the Burton Wildlife Centre after being found in a garden with injuries consistent with having been shot by an air rifle.

A community fund, set up by the police and crime commissioner, has awarded the RSPB a grant of £2,000 to help prevent wildlife crime at its reserve off the Northumberland coast.

Coquet Island is home to tens of thousands of breeding seabirds during spring and summer including a nationally important colony of Roseate Terns. As a result, the island is designated as a wildlife sanctuary and landing on it is prohibited without consent.

The RSPB will use the grant from Vera Baird's community fund to upgrade the island's outdated CCTV system so wardening staff can monitor the island effectively for illegal activity such as egg theft and disturbance. Although surrounded by sea, Coquet Island's wildlife is at risk from wildlife criminals. In 2004, Roseate Tern eggs were stolen, and in July 2012 two brothers from Amble were found guilty of causing reckless disturbance to the breeding colony when they landed on the island.

Paul Morrison, warden at RSPB Coquet Island, said: "This generous grant from the police and crime commissioner means that we will be able provide greater protection for the UK's rarest seabird and make staff feel more safe and secure when working on the island. It is also a powerful endorsement of the RSPB's view that wildlife crime is a serious issue that needs to be tackled head on with the right resources."

Vera Baird, police and crime commissioner for Northumbria Police, added: "Tackling wildlife crime is an important priority and I am pleased that we have been able to support the excellent work of the RSPB to help protect some of the UK's rarest seabirds on Coquet Island. Northumbria Police and I will continue to work closely with the RSPB to help protect rare birds and to stop the theft of birds' eggs." 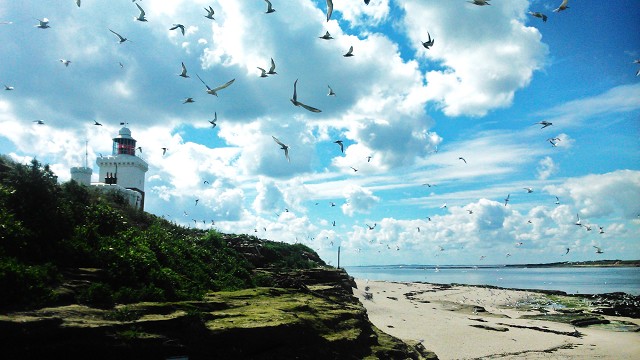 Michael Wood, 69, of Sinnington, was found guilty of permitting the use of a pole trap on a game farm at Cropton near Pickering at Scarborough Magistrates Court on 17 February. He was fined £4,000, and ordered to pay costs of £750 and a victim surcharge of £120.

"Despite the fact that wild birds are protected by law, birds are still persecuted and suffer cruel treatment. This is unacceptable, and we will not tolerate it in North Yorkshire."

Police in South Armagh joined Northern Ireland Environment Agency and the Health and Safety Executive Northern Ireland to conduct searches in January in the Drumbanagher area. The searches were prompted by the discovery in October 2014 of a poisoned Common Buzzard. Tests revealed that the Buzzard had been poisoned by Carbofuran.

A former Fife police officer who worked for five years as the region's wildlife liaison officer received a lifetime achievement award from the WWF in January. Ian Laing was involved in the first case in Scotland to use the Convention on International Trade in Endangered Species (CITES) to prosecute someone found trading in endangered species over the internet.

Early 2015 saw the launch of a Government pesticide disposal scheme in Scotland. The scheme forms part of the Partnership for Action Against Wildlife Crime (PAW) and is free and confidential for farmers to use. The pesticides accepted are: Aldicarb, Carbofuran, Carbosulfan, Isofenphos, Mevinphos, Sodium cyanide (usually known as Cymag), Strychnine and most types of Bendiocarb.

Environment minister and chair of PAW Scotland, Aileen McLeod, said: "There were 96 recorded incidents of illegal poisoning abuse involving wildlife in the last 5 years from 2009–2013. It is essential that we remove all substances from the countryside that could kill our wildlife, and that are a risk to people and pets who may accidentally be exposed to them, which is why the Scottish Government has introduced the pesticide disposal scheme."

"I would encourage people to carefully and safely check sheds and outbuildings for old stocks of illegal substances. While recent incidents have demonstrated that some people are still deliberately using these pesticides to kill wildlife, we also know that in many cases these substances may have been left forgotten and unused for years. Therefore I hope that people will come forward safe in the knowledge that handing over these pesticides will not be seen as assumption of guilt."