Surely few people would deny – except maybe Blue Tit addicts – that Britain's most cherished garden bird is European Robin. A tubby little embodiment of soppy cliches perhaps, but one that even hard-baked twitchers would condone. Perky, cheeky, smart, friendly and plump – the robins, not the twitchers.

One of my neighbours hates most garden birds. But he trembles with a frisson that any twitcher would appreciate after nailing a crippler when he tells me: "Hey Bill, our robin is back again. He comes every year." I am wickedly tempted to elucidate: "Most robins only live a couple of years, and males and females are identical." But I am not so callous as to destroy whimsy with science. Besides, during the great lockdown of 2021 I confirmed that I myself am not immune to 'robinitis'.

It began with a close encounter beneath a Mahonia bush. I was lying on my stomach culling undesirable sycamore saplings. My eyes were focused at ground level when I realised that I was almost nose to beak with an adult robin. My garden robins are typically tame. They take mealworms from my hands, perch on my feet and shamelessly splay their feathers to take in the sunshine. But this was the closest encounter I had ever had. I crawled backwards and left the bird staring at me, as if transfixed by my lack of spatial awareness. 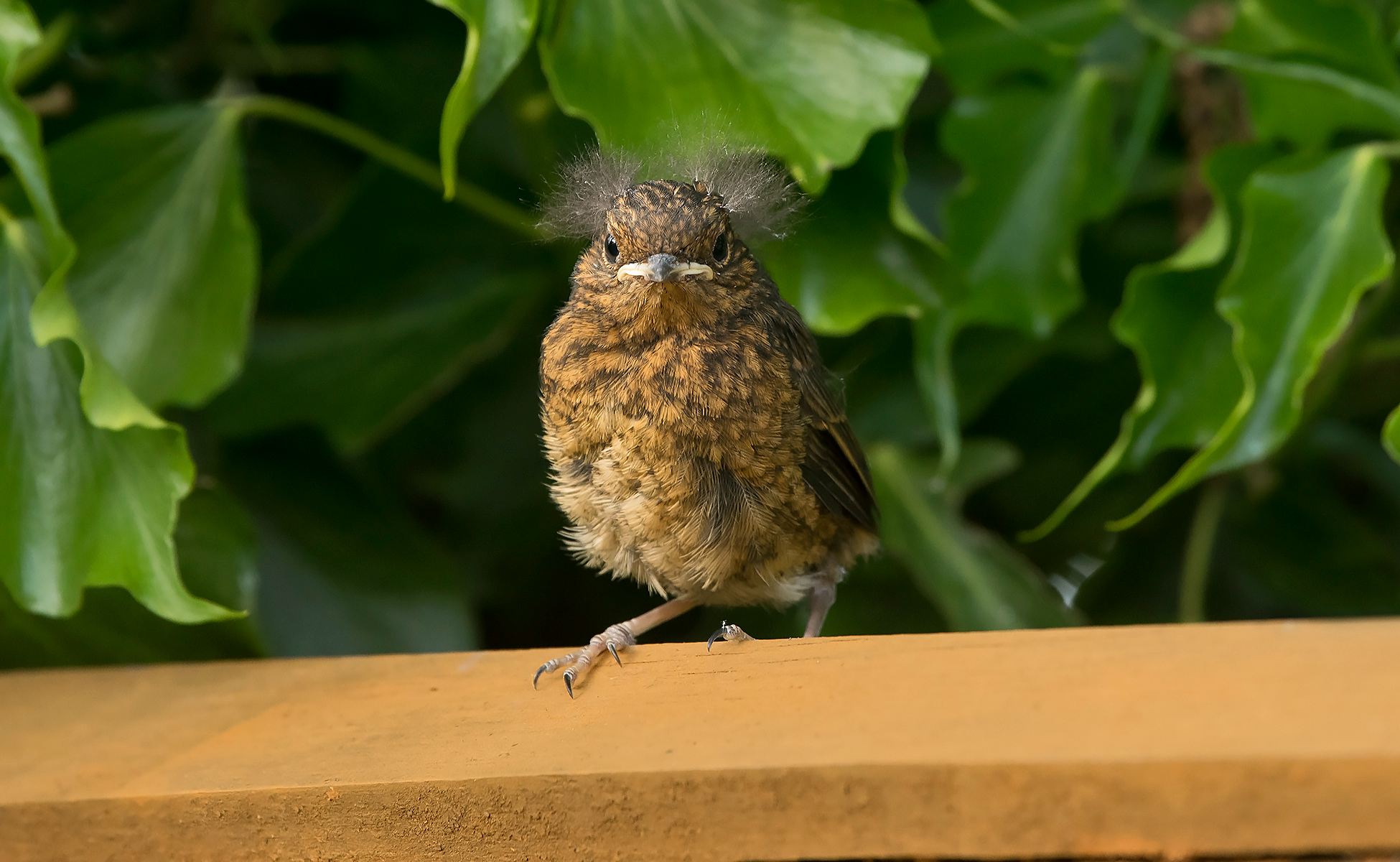 The dark days of lockdown were brightened up by the antics of a European Robin family (Steve Young).

I apologised and whispered: "Bye bye, see you later by the feeders." Yes, I talk to the birds in the garden. Don't you? Of course you do. Just as you talk to your dog or cat, often in preference to your partner. Sometimes about your partner. By the way, it is much cheaper to cater for a robin than a dog.

Robins can't talk, but they do sing, all year round, varying the melody from cheery to wistful to match the changing seasons. They go pretty quiet for a few weeks in summer, with beaks full of nest-building materials, or live worms – earth and meal – and frantically feeding growing chicks in a nest that I have never found, since it is somewhere in next door's garden, owned by a neighbour who doesn't even put out peanuts. There's gratitude for you. Why don't they breed in my garden, with its large choice of nestboxes, cascades of ivy and inexhaustible ornithological food bank?

At least they brought their spotty little fledglings over the fence to feast on my fast food and I even witnessed several handovers, with the youngsters doing their whirring wings and baby begging act, and on one occasion being offered half a Poplar Hawk Moth that Mum or Dad had caught in mid-air after I had released it from my moth trap which, by the way, soon became the robin family's equivalent of a McDonald's.

So, day by day, the potentially morbid weeks of lockdown were enlivened by Britain's favourite bird. Each morning the red feathers spread a little lower on the breasts of the fledglings, while one of the adult's tail moulted until it fell off completely! I had to laugh at its impersonation of a midget pitta. It soon grew a new tail, so did its mate.

Having resumed the garb of classic European Robins, they immediately resumed their notoriously belligerent nature and started chasing and attacking one another, at which point a third adult appeared and joined in the rumble. Not many days later they disappeared, presumably off to enjoy the latest less restrictive COVID-19 rules. Meanwhile, the juveniles had inherited 'feeding from my hand' tameness, but by early September they too had moved out. They never did say "goodbye".

By October, I too was able to extend my birding boundaries and resumed 'viz-mig' mornings on Parliament Hill. I couldn't help thinking: two hours staring at dots in the London sky or half an hour in my garden – which was most enjoyable? How about a bit of both?