Despite such birds appearing in geographical isolation to the known hybrid zone, scientists have previously suggested that they might still be hybrids, or alternatively could be the products of genetic variation affecting the carotenoid pigments that produce their flight-feather colours.

However, it now appears that diet may be to blame. In new research, published in The Auk, Jocelyn Hudon of the Royal Alberta Museum in Canada and her colleagues tested the red flight feathers from two Yellow-shafted Flickers and found traces of rhodoxanthin, a deep red pigment found in plants, and a potential metabolite. This suggests that the birds' bodies break down rhodoxanthin — a clue that the pigment enters the body through food. Spectral and biochemical tests of feathers from museum collections also point to rhodoxanthin and suggest that the pigment may affect yellow carotenoid production as well.

According to the researchers, Yellow-shafted Flickers are suspected of picking up the red pigment when they eat berries from invasive honeysuckle plants, which contain the ruby pigment and produce similar red hues in other birds. The plants also happen to produce berries just around the time that flickers moult their flight feathers — a fairly abrupt appearance of red colour in earlier-molted primaries (usually p4 or p5) followed by its gradual fading in subsequent primaries in a large series of aberrantly coloured flickers from eastern North America and the American Midwest supports this dietary explanation. The theory is further supported by the fact that the blocks of anomalous colour in the shafts may differ from one year to the next in the same bird. 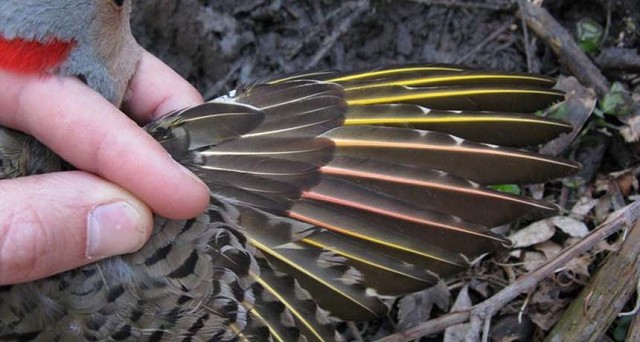 Aberrant red feathers stick out amid the typically gold wings of Yellow-shafted Flickers.