The world needs honey bees. Aside from their key ecological function, they are responsible for pollinating nearly 85% of all food crops for humans, and provide us with several useful products, honey being top of the list.

But what about Africanized Bees? These are the infamous aggressive 'killer bees', descendants of African honeybees introduced into South America in 1956 which have rapidly spread through most of South and Central America, arriving in the USA in the 1990s. Although through specific management techniques they appear not to affect the production of honey or beekeeper investment significantly, at least in the USA, they can have serious impacts on native wildlife. In South and Central America, Africanized Bees frequently occupy holes suitable for threatened native species of cavity‐nesting birds, and the potential negative effects of this competition is worrying.

Lear's Macaw is an endangered species endemic to northern Bahia in Brazil, which nests in cliff cavities frequently invaded by Africanized Bees. Native to the tropical dry forest and scrub of the arid caatinga zone, Lear's Macaw has a very small geographical distribution and is threatened by continuing degradation of its habitat and food supply, by the theft of wild chicks from nests for trade, and being occasionally persecuted by farmers for foraging in maize crops. 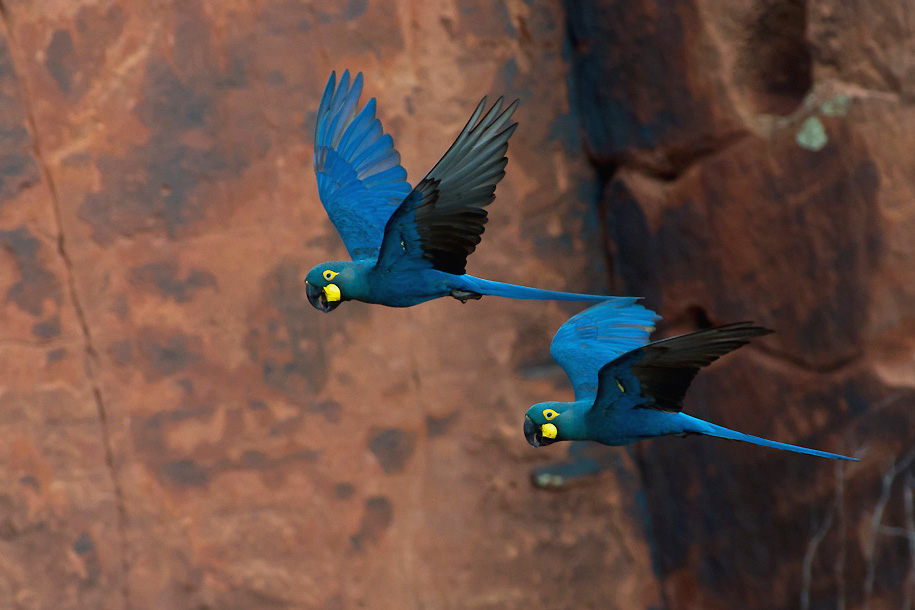 Lear's Macaws nest on cliffs at two traditional sites, but have recently colonised at least two additional sites – this expansion most likely related to the continuing increase of the wild population, which reached a total of 1,694 individuals in 2018. The improving fortunes of the species are largely due to efforts, supported by more than US$480,000 from the Loro Parque Fundación (LPF) since 2006, to better understand its ecological requirements, and in parallel to execute conservation actions for its immediate recovery and long-term security.

Although improving, the situation of the species is still precarious, not only because of its very restricted nesting areas, but also because of the discovery by Dr Erica Pacífico that only about 20% of individuals are reproductively active in any one breeding season. Using rock-climbing equipment, and courage, Erica has spent years ascending and rappelling the cliffs to study the species' breeding biology.

She has found that Africanized Bees have progressively occupied an increasing number of cavities in the breeding cliffs. Not only do the bees exclude the macaws from suitable nesting cavities, but also that bee colonies located near active macaw nests prevent safe access for monitoring. In one count, more than 100 bee nests were recorded on the nesting cliffs – outnumbering Lear's Macaw nests tenfold in two areas. Cavities occupied by bees were significantly higher on the cliffs than those occupied by macaws, possibly forcing the macaws to breed in lower, more accessible cavities. 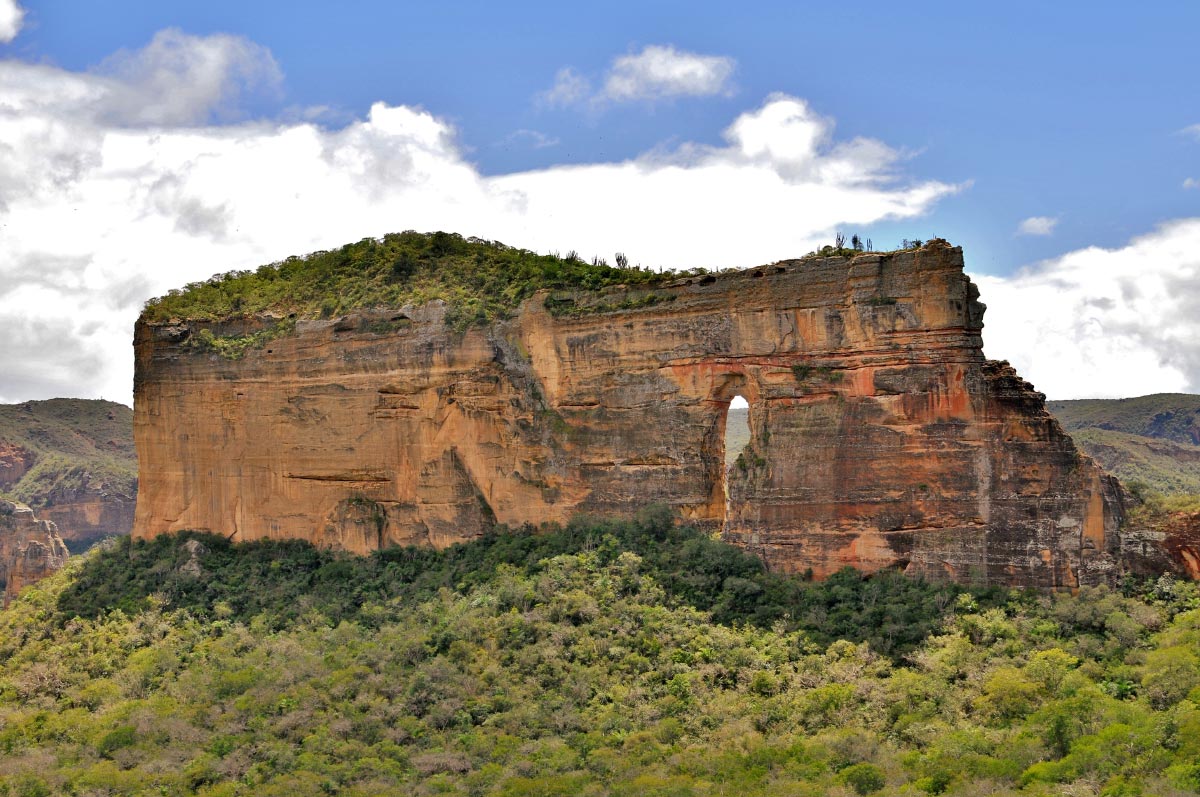 Therefore, action was taken to assess the effectiveness of the so-called 'push-pull' method to remove the bees. Championed by bee control expert Dr Caroline Efstathion, founder of the Florida-based Avian Preservation and Education Conservancy (APEC), this method pushes the bees away from nesting cavities with a safe permethrin repellent, and simultaneously pulls the bees close towards trap boxes, each with an attractant pheromone to act as a lure, installed at a lower level. The LPF has previously helped to support Caroline's work in using this method to reduce bee occupation of nestboxes installed for threatened Cape Parrots in South Africa.

The bee nests in cavities on the macaw nesting cliffs were treated with permethrin by shooting a crossbow bolt that distributed the repellent upon impact. When feasible, the comb was removed from the cavity and an insecticide of lower toxicity (fipronil, used to control fleas on household pets) applied to deter bee recolonization. Despite the experimental nature of the work, the results were very encouraging. None of the untreated cavities were occupied by nesting Lear's Macaws, but 15% of treated cavities were occupied within two years following treatment. Treated cavities occupied by macaws were significantly higher on the cliffs than those not occupied. A subsequent survey of the macaw breeding population has shown that bee nest management contributed 71% to the increase of the breeding population. 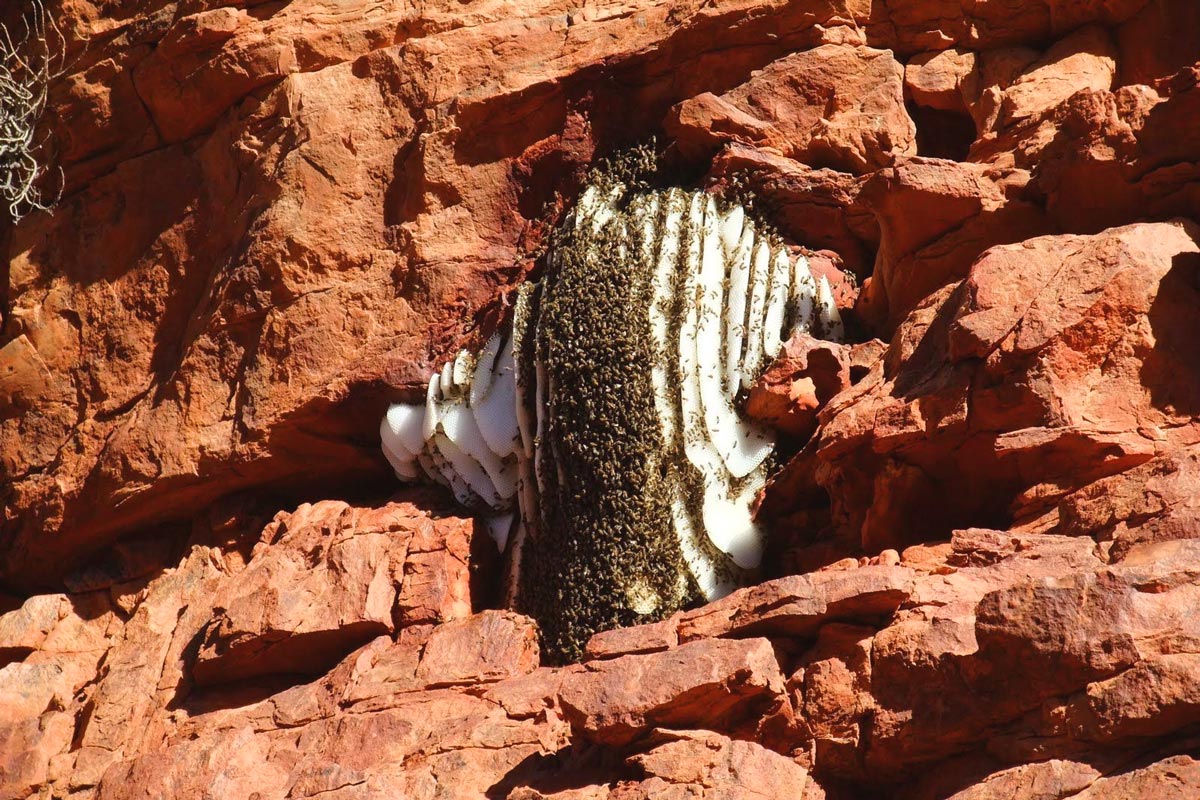 An intensive and continued eradication programme is recommended to enhance the expansion of the macaw's population into historical areas, but long-term success will depend on the involvement of local people. It is common in this region for people to collect wild honey, and on the cliffs they construct stick ladders to reach the higher bee nests. In some cases this brings the collectors close to macaw nests, with the risk that they can poach chicks out of convenience. However, part of the ongoing work is to provide interested farmers with hive boxes, personal protective equipment, and instruction on how to maintain bee colonies for honey production. In this way they will have a new source of sustainable income, and an incentive not to cut down trees or scale cliffs to obtain honey, and thus assist in keeping poachers out of the area.