My first experience with a bear of any description was a pretty scary one. I was an eight-year-old on a school field trip to Whipsnade Zoo. I recall standing by a seemingly empty bear pen peering in through the wire fence not having a clear view, as it was fairly well foliaged. Then I heard a noise that has stayed with me ever since — the heavy pounding feet of an unseen humongous Brown Bear heading towards me at some pace. Closer and closer it came, each footfall louder than the previous one. I was certain that the ground was quaking or it could have been my knees about to buckle. I didn't stop to see the bear arrive having pelted off in the opposite direction!

Well that was then, and now some three decades later I was once again recalling that memory as I nervously stalked along a trail in a taiga forest in Finland. It's early July, the height of summer and I'm under the cloudy evening skies in the company of my guide, wildlife photographer and naturalist Lassi Rautiainen. We are within spitting distance of the Russian border in an area of forest locally dubbed 'No Man's Land' some 70km north east of Kuhmo in the Kuusamo region of northeast Finland. Our quest was to observe the Brown Bears that use this stretch of a forest that expands some 200km across the Russian border. We had driven from our basecamp in Kuikka and were trekking the final 1.5km to the hide by foot in silence. Lassi had stressed that when we got into the hide we were to keep the noise to the minimum so as not to scare the wildlife. That meant no gags or belly laughs until 0800 hrs the following morning — some 13 hours later. 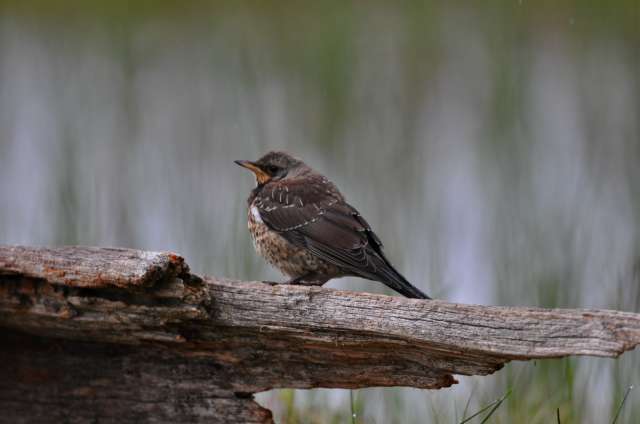 We settled into the hide, one of three facing across a wet meadow nearly a kilometre long and half a kilometre wide. As our human odours dissipated outside, we set up our cameras, sat and started to observe the scene. We waited...and waited. There was plenty of activity outside the hide that kept us entertained, including many White Wagtails, immature Fieldfares, a small number of Common Gulls and some truculent Ravens. It was fascinating literally to watch a day in the lives of a couple of Mallard and Teal broods. The drama they went through during our vigil — avoiding swooping Kestrels and a watchful White-tailed Eagle, finding food and generally corralling wandering ducklings — looked exhausting! 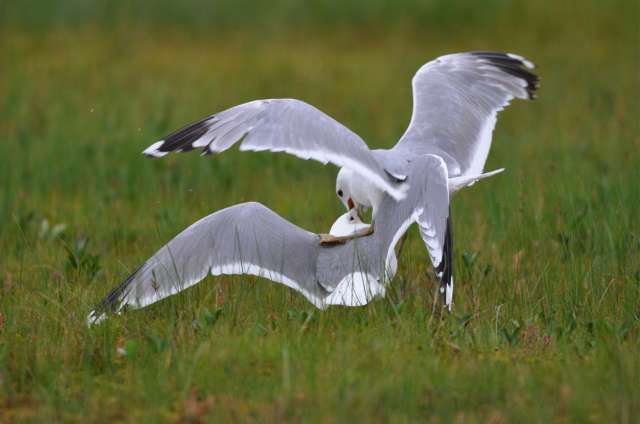 Occasionally waders from a nearby lake flew in and landed in the wet meadow right in front of the hide. We saw Greenshank, Whimbrel and a Ruff still resplendent in its breeding plumes, whilst a pair of Great Spotted Woodpeckers, a female Three-toed Woodpecker and a female Common Redstart all visited the birches near the hide. This area of forest is also famous for its Wolves, Wolverines and Lynx, so I sat in the hide high on hope. 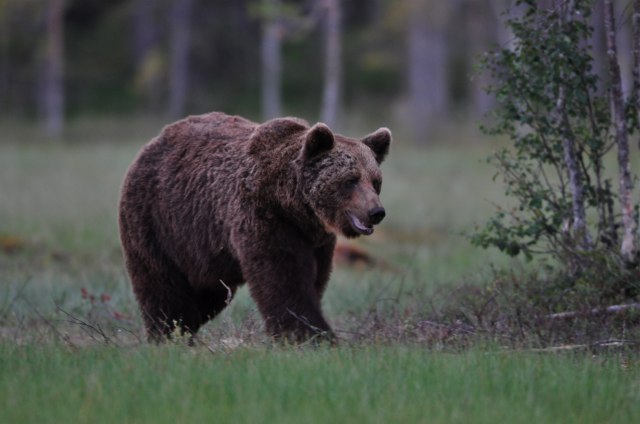 Then we noticed movement within the darkened forest edge. It was a bear and it looked enormous despite being a third of a kilometre away. The Brown Bear Ursus arctos is Finland's national animal with an estimated population of between 350 and 1,000 individuals. They certainly are big critters sometimes weighing in at over 1,000lbs and are currently seen as being the same species found in North America that also include the outsized Grizzlies. 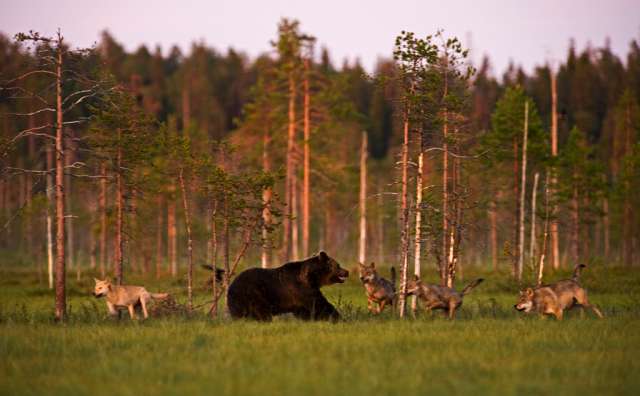 Lassi had strategically placed pig carcasses a couple of hundred yards directly in front of the hide, something that he regularly did to lure the bears, Wolverines and Wolves out of the forest. Our bear had gingerly stepped out into the open, nervously sniffing the air every couple of yards almost like it was naked in public, nervously looking around to see if anyone was watching. They have very good reason to be reticent about leaving the comparative safety that the forest provides, as they are still to this day hunted in Europe and have an understandably abject fear of humans. Lassi explained that they would sooner run away than confront a human and the only time that you are really in danger is if you come between a mother and her cubs. The last human fatality in Finland was 10 years ago when a jogger had the misfortune of doing just that. 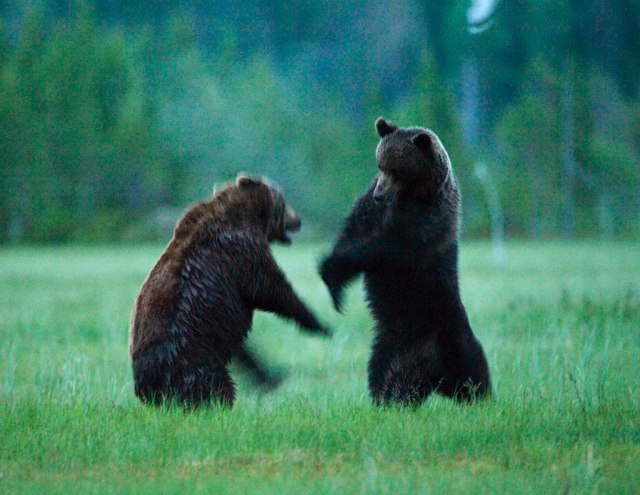 It was now gone midnight and showing no signs of getting dark. I was enjoying amazing views of the bear busily chomping on the tethered carcass. As Lassi had witnessed this a thousand times, he took the opportunity to get some shut-eye on the floor of the hide. Soon his rather raucous snores were ringing out. From the corner of my eye, I noticed another bear literally 50 feet to the side of me. It was exhilarating until I noticed it cocking its head as if it had heard something. A rasping snore suddenly filled the hide. The bear started heading towards us and was soon lost from sight as it went behind the hide. I frantically tried to wake Lassi; first by calling his name, then with a gentle tap on his feet. He eventually woke when I half screamed his name whilst literally booting him!

Nonchalantly, he told me not to worry as I fretted that the bear could quite literally blow our flimsy hide down with one snort. The bear eventually resurfaced from around the other side of the hide and proceeded to feast on the salmon that Lassi had secretly stashed some 15 feet before us. It was mind-blowing being so close to this large creature and to hear it slurping as it looked around suspiciously.

I felt privileged to be in its company. 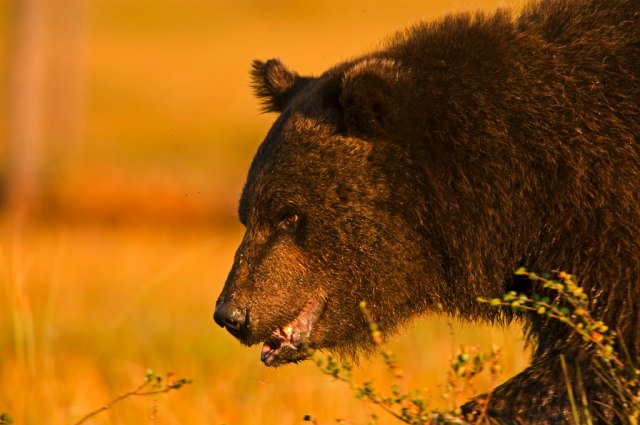 David expresses thanks to: