The Batumi area of Georgia is in the Eastern Black Sea Migration Corridor, which around a million birds of prey pass through annually. The unique topography of the area and its typical autumn climate create the right conditions for viewing this spectacular migration, which ranks as the third largest on the planet. On peak days, numbers can surpass 100,000 raptors, and on an average day in September at least 20,000 birds of prey will be flying by.

There are huge numbers of European Honey Buzzards, Black Kites and Steppe Buzzards, with many other species travelling with them. Eagles, harriers, hawks and falcons also use the flyway and an astonishing 35 different species of birds of prey have been recorded! The rare Crested Honey Buzzard is a reliable possibility, with regular sightings peaking on the third week of September. 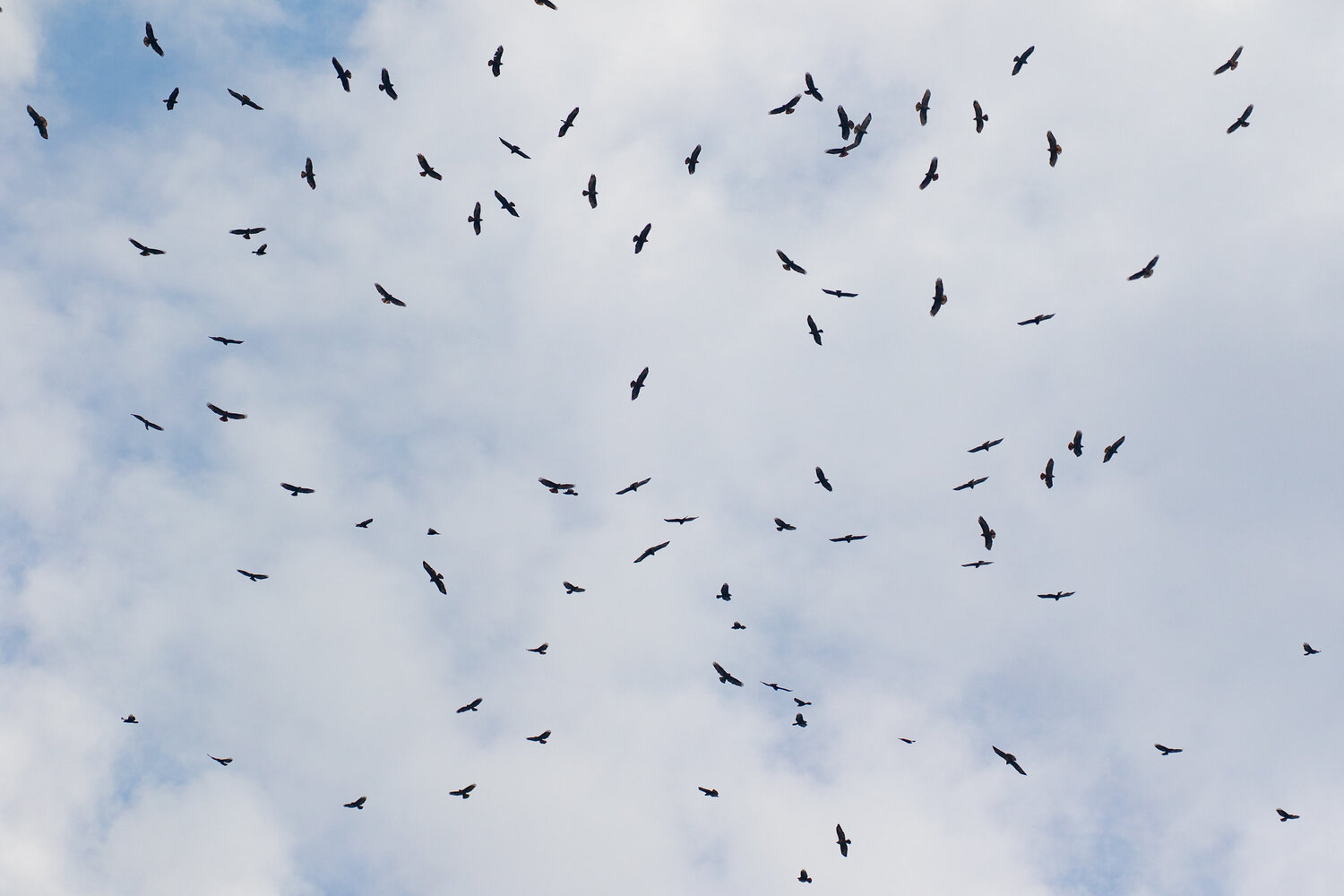 Hundreds of thousands of Steppe Buzzards pass through (Bart Hoekstra).

If conditions are right, it is possible to witness the spectacle of more than 100,000 birds of prey on the move in a day. The bulk of these are European Honey Buzzards and Steppe Buzzards, with the period between 28 August and 4 September the best dates for the former, and between 25 September and 2 October for the latter. Such massive movements usually occur following a period of bad weather in the bottleneck that has hindered migration. 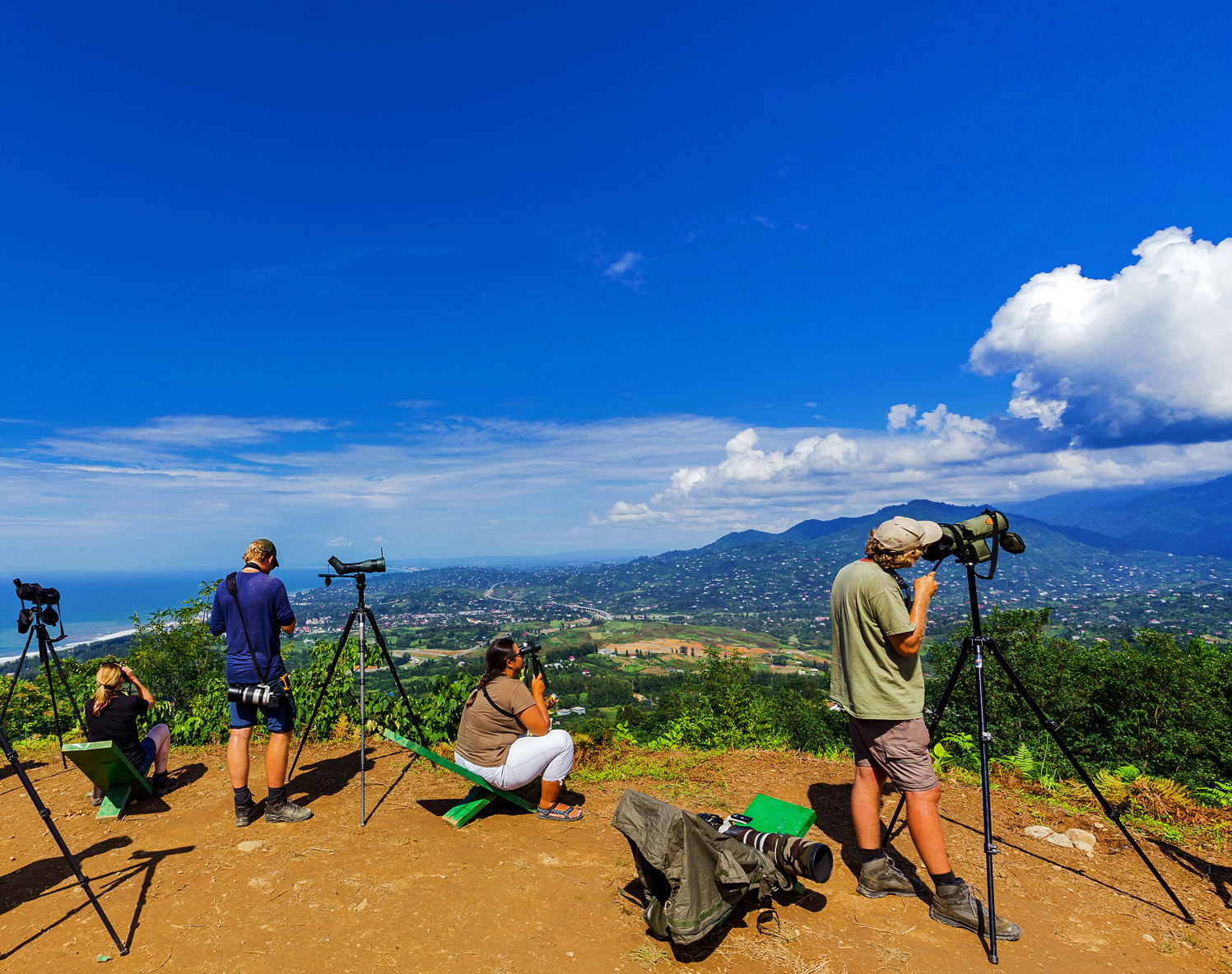 Watching visible migration at Batumi is a relaxed and social affair, with thousands of birds to enjoy from the viewpoints (John Wright).

Batumi is also the only reliable place to see migrating flocks of harriers. Loose flocks of up to a thousand pass through, with a peak in early September. The majority are Western Marsh and Montagu's (including rare dark-morph birds), with smaller numbers of Pallid and Hen accompanying them. Identification skills can be honed by attending one of the harrier identification workshops at the Batumi Raptor Count visitor centre. Later in the season, the Shuamta watchpoint is dubbed 'eagle mountain' when diverse totals of up to seven eagle species reach their highest numbers.

Batumi offers much more than raptors alone. Flocks of European Bee-eaters and European Rollers add a splash of colour, while showers and thunderstorms force migrating passerines down to the ground. The parks and open spaces around Batumi can be heaving with birds during the autumn. Warblers, flycatchers, wheatears, shrikes and crakes make use of any available cover and you might find that as you are enjoying a coffee outside a cafe a Red-breasted Flycatcher is making use of the flower baskets!

Autumn is the key period for observing overall numbers and raptor migration, but spring offers good raptor movement as well. The period between April and the end of May offers the chance to see huge numbers of birds passing north in their smart breeding plumages. Winter is also very productive, with the area attracting important numbers of wildfowl, divers and gulls. 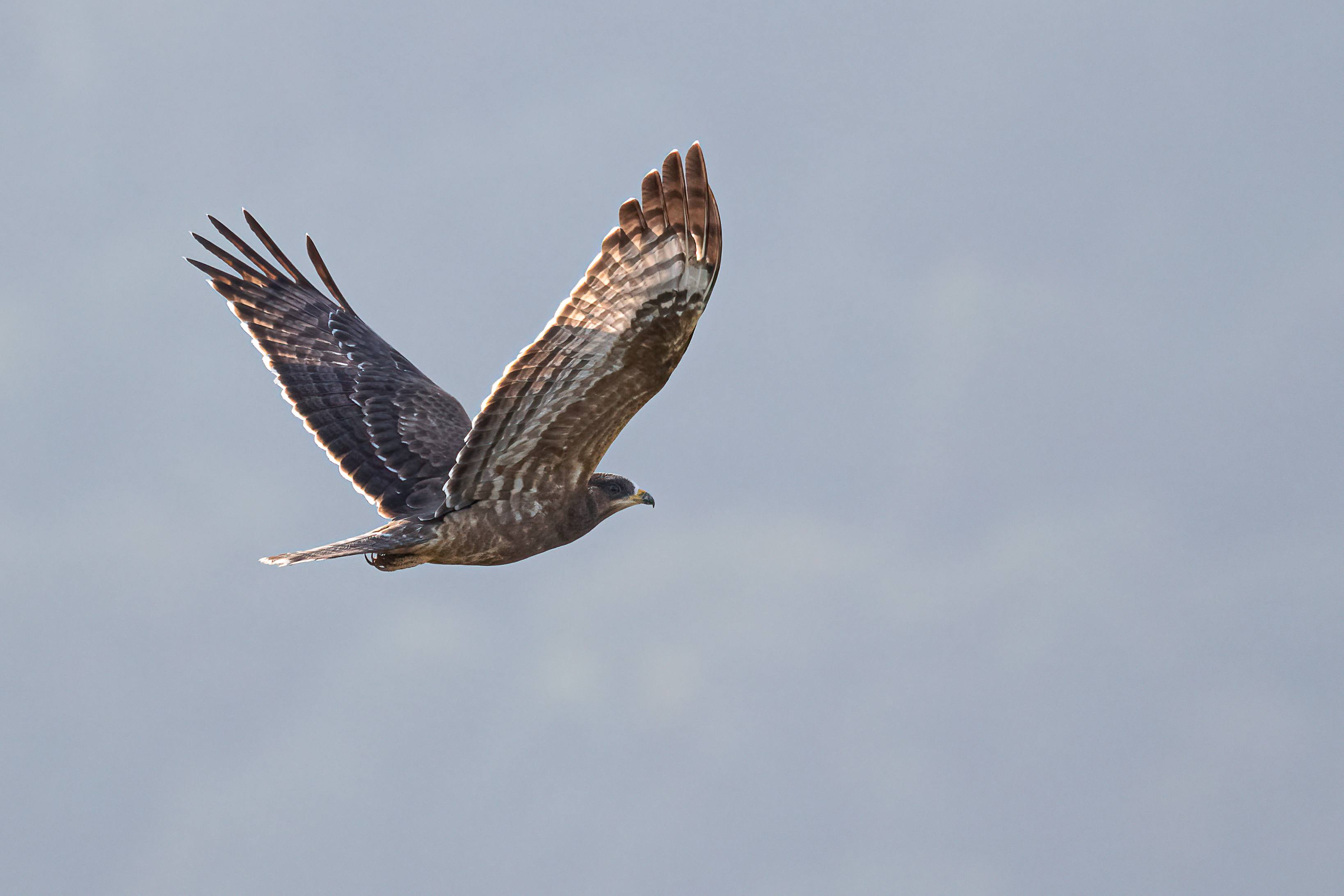 In September, spectacular 'kettles' of raptors are seen each day, with vast numbers of European Honey Buzzards passing through the bottleneck (Bart Hoekstra)

The birding season in Adjara officially starts on 16 August and ends on 16 October. The festival takes place in early September and leaves an unforgettable impression. There are several top-class birding hot-spots in the area, encompassing a range of habitats and allowing all-comers to enjoy a huge array of birdlife.

There are two birding platforms in Adjara, which are located in the villages of Sakhalvasho and Chaisubani-Shuamta. These give superb views of the flocks of birds of prey moving overhead. You can also observe migration from the peatlands of Ispani, the Chorokhi river delta, and from Mtirala and Kolkheti parks. The area around the Chorokhi delta is particularly productive, with its diverse habitats ensuring a high turnover of migrants. After overnight rain, the area is usually swarming with waders, terns and a wide range of passerines, which include a long list of exciting regional rarities. 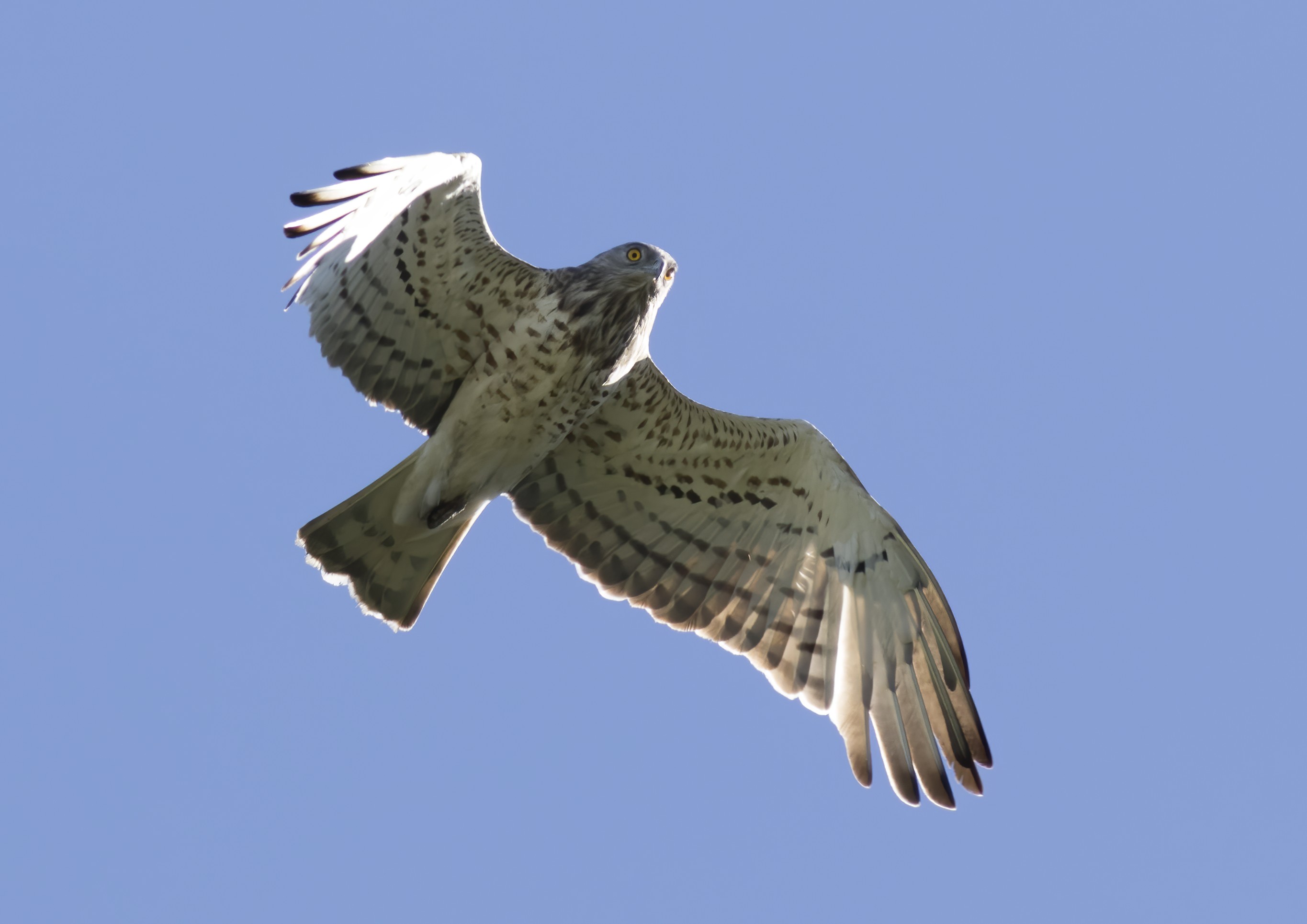 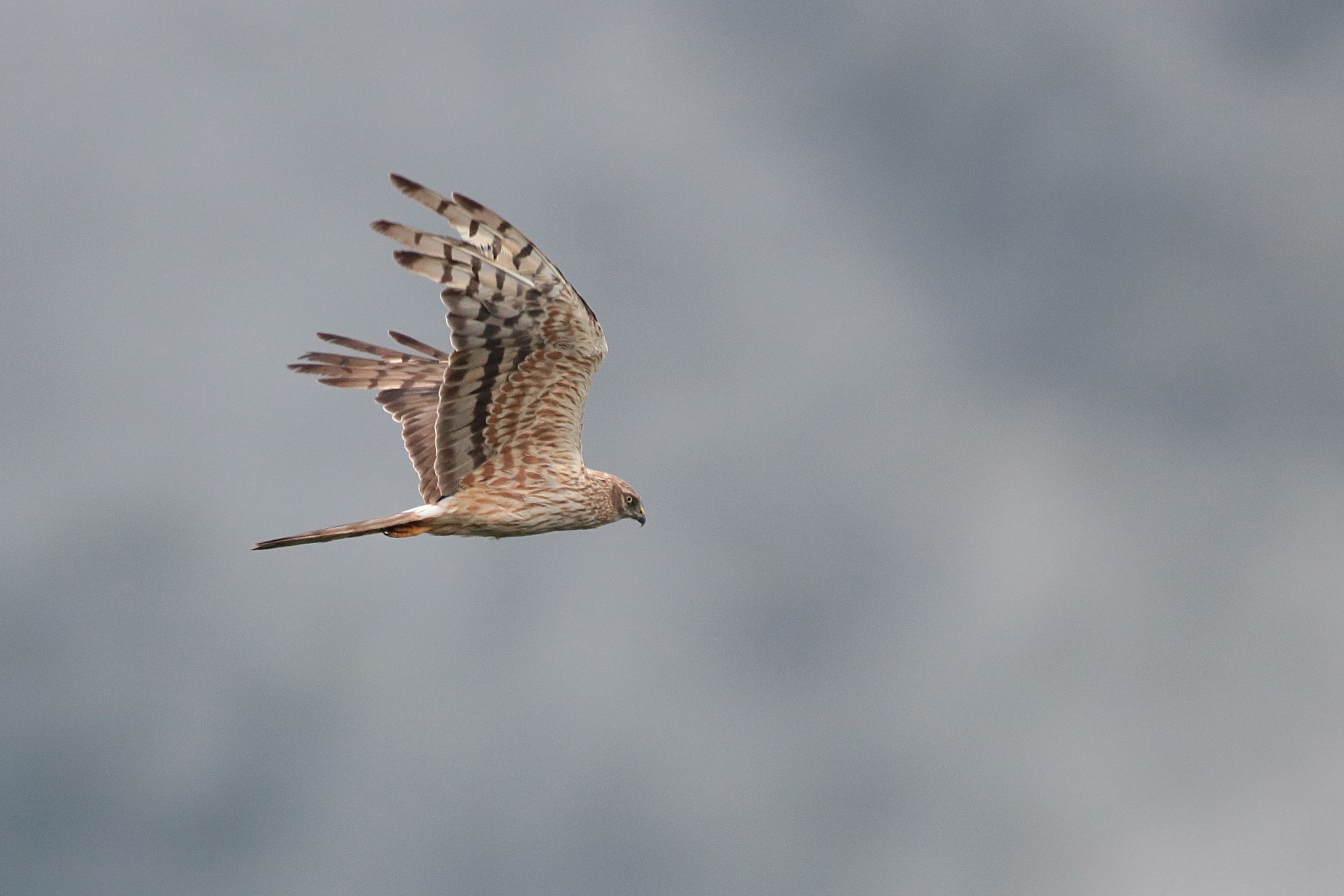 There is also the opportunity to watch and participate in the research work of Georgian and international ornithologists, including counting and ringing birds, as well as attend a range of presentations and discussions to learn more about the area’s spectacular diversity of migratory birds. The festival has been taking place since 2012, and there are lots of like-minded people attending, ensuring a relaxed and friendly atmosphere.

The festival is organized by the Tourism Product Development Agency of the Department of Tourism and Resorts of Adjara. The excellent idea of holding the event came from the International Environmental Protection Organization, Batumi Raptor Count (BRC; www.batumiraptorcount.org). BRC publishes an annual report, recording the species and number of migratory birds in a season.

According to the data from September-October 2021 an astonishing 1,422,171 migratory birds of prey were recorded and included more than half a million European Honey Buzzards. In the right conditions, many of these birds pass at or below eye level and offer fantastic views. 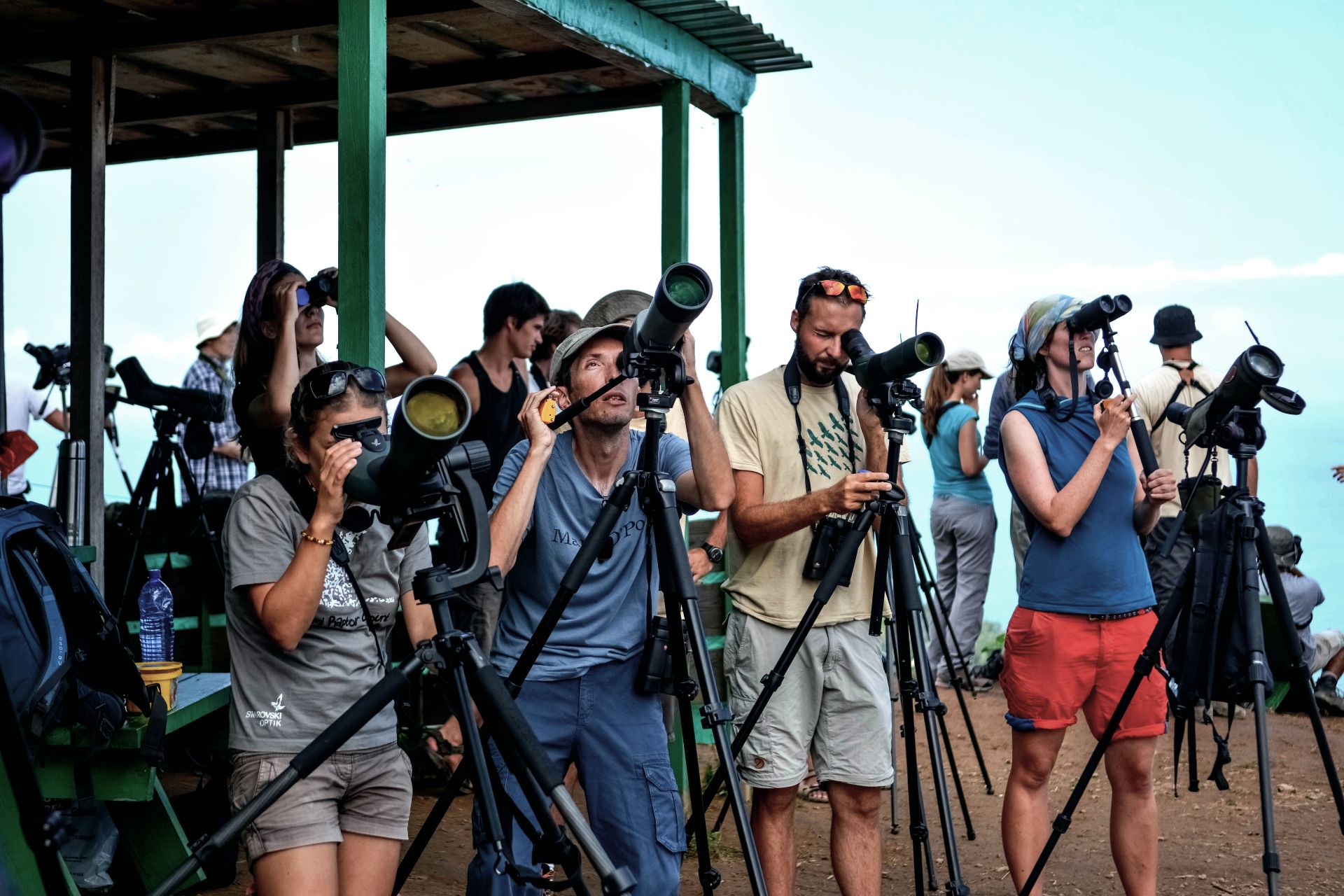 Pleasant weather conditions, like-minded people and a huge number of birds to look at makes for a winning combination (John Wright).

There is a good range of comfortable guesthouses that provide accommodation close to the different birding watchpoints. By staying in these family-run hostels, you contribute directly to the community-based conservation program, and can arrange your time independently or spontaneously join regular day trips to the area around Batumi. If you prefer more comfort, various quality hotels are within easy reach, and an increasing number of tour operators are running tours to the area to witness this extraordinary spectacle. Taking in the sight of a sky full of wheeling birds of prey is one of the finest wildlife experiences that the world has to offer.

Further details of how to join the excitement of the 2023 festival can be found at: