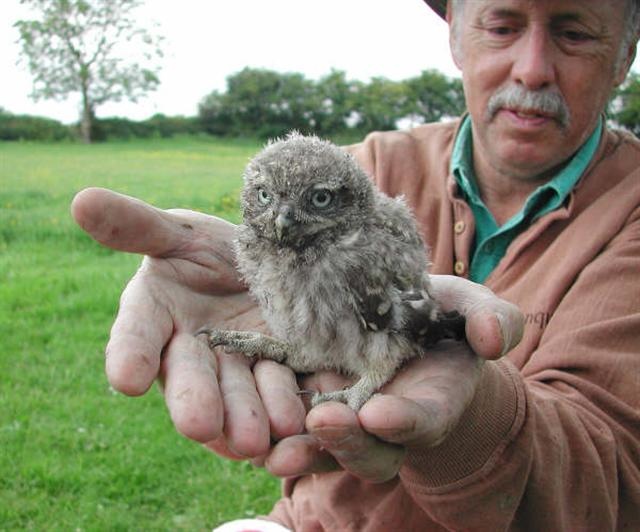 I came back from Ireland refreshed and once the hangover had cleared, was ready to sort out the second-brooding birds that we'd found. With all of the first broods ringed and mostly fledged, now was a good time to take stock and look at the remarkable year so far. RUBOP had 30 breeding pairs with no failures and 114 chicks ringed. During this period, we'd also either ringed or controlled a further 29 adult birds, adding greatly to the data we have for our adult birds. We'd also ringed a further 2 broods for our friends at WCP; another 6 chicks in the RUBOP area and supervised a tree hole where the 3 chicks fledged unringed.

Looking ahead, we had a further 21 pairs that were either on second broods or late first broods. We knew that some of the females were new birds for us but had no way of knowing whether they'd already had a first brood outside of a RUBOP box. We'd always had a few second broods but in our experience, birds often abandon after laying eggs so we weren't too optimistic in having a big number of successes. We tend to look on second broods as a bonus and after the year we'd had, we were completely happy already.

Today, we were ringing chicks in a box which over the years had produced nothing but Stock Doves and Jackdaws. The female we'd caught in the box was unringed so we didn't know whether this was a first or a second brood. There were four well-grown chicks still on top of the old Jackdaw nest and we removed the Jackdaw sticks to give the growing chicks more room as they fledged. These were earlier than our other second broods so we had a respite before we did any more ringing. On the way home, we had a look in two boxes where we'd found females on eggs in August and found growing chicks in both. 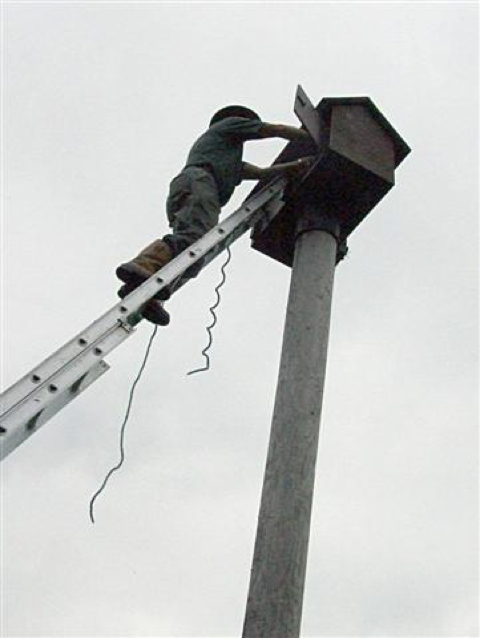 A trip out with Lynne to ring the chicks in the pole box at the Wild Flower Farm. This was another unknown female and there'd been seven chicks in the box when we'd checked in August. The owner and his wife came over with us and I had my fingers crossed as I climbed the ladder. Now would be a bad time to find the box empty. However, we were in luck and we ringed six chicks; the owner must have been delighted as he offered us a nice pot of tea in their tearoom. With a pair now established in the farm, now was a good time to prospect for another box; two boxes are always better than one as it gives the adults a choice for breeding and an alternative brooding site for the male after he's kicked out of the box. We had a look around their site and earmarked a suitable tree for a second box.

Another short break, this time to Spain to watch birds of prey crossing the Straits of Gibraltar (it's a hard life), then back into ringing second broods. Jim Lennon had done three while I was away and had a 3 and a 4 plus one failed. I went out to my local parkland and ringed a young male and his two sisters. Later I went to the box which had ten eggs but the pair had deserted; what a shame.

Jim had emailed me to say that he'd been ringing second broods in Lincolnshire and that they'd found that about half had failed. Looking on the bright side as I do though, with so many more pairs on second broods, we were still going to have many more chicks than usual.

Lynne and I had a few to do today and went first to what's probably my most productive box and only about two miles from Trent Bridge. We'd fledged five in the first brood and ringed another five today, making it ten for the year. If only all our boxes were as good as this. Next, we went to a box that had been empty earlier in the year, another with an unknown female and there were six to be ringed here.

From here, we went to the creamery but hit a snag as the building contractor had gone off with the keys to the field. We arranged a visit for the next week and carried on to the WCP box that Lynne and I had rehung earlier in the year. The birds here had first-brooded in a nearby tree but had returned to the box for their second brood. There were two chicks here, which were soon processed. Next, we went to the farm that had two pairs successful early on. One pair had failed their second in a nearby tree hole after laying seven eggs and the box we went to now was being used by its second female of the year and this too had failed at the egg stage: the four eggs lay untouched in the box where we'd last seen them. Still not a bad day, three out of four successful and 13 chicks ringed. 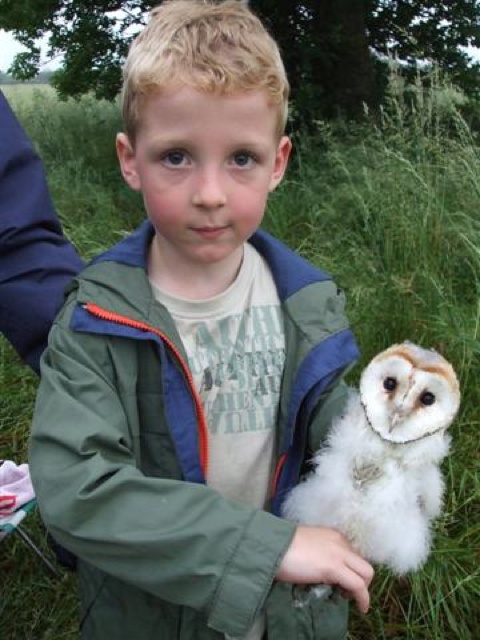 Still a few to do, Gordon came over and we collected Lynne on the way to the creamery where they'd found the keys. The creamery owner had made us quite a sizable donation when we'd first put the boxes up but was unable to come out with us; however, we picked up one of the creamery girls with her camera, so again, we had an anxious time as we approached the box. Again we were lucky in that the birds had stayed on. There were three chicks on top of a Jackdaw nest which Gordon removed while I ringed the chicks. Photos were taken and everyone was happy. From here, we went to the old Co-op College but found just the old eggs in the box; another failure but the next two were OK, ringing 3 at Hathern and 2 at Gotham, both second broods to pairs that we knew.

Two pole boxes at Rushcliffe CP today; Nigel Oram came over to help with the long ladder and Lynne and Clive made up the workforce. We'd had breeding Barn Owls on the park for quite a few years now and never had a second brood and this year wasn't any different. Both boxes had the old eggs still and we did see one adult which was roosting in the roof space of one of the boxes.

The last box was one in a garden close to a house at the other side of Ruddington and was a second brood for the pair that we'd used for the Central TV News item we'd done in the rain back in June. The lady had told me that the adults were still bringing food to the box so we'd high hopes that there'd be something to ring; there was, just the one, an only owl and this was the last one we ringed for this fabulous year.

So the second broods hadn't proved too bad, RUBOP had 11 successful pairs, one WCP pair and nine failures so just over half successful and the second gave us another 40 chicks to add to the 114 ringed from the first broods; a total of 154 for RUBOP, 8 for WCP and 6 in tree holes that we monitored but fledged unringed. 168 young Barn Owls fledged in our area. Our best before this year had been the 59 chicks ringed last year; a massive increase that we hope carries on into next year. Add to these three broods of Little Owls and three of Kestrels, all in our boxes.

A massive thanks go to our work team of Gordon Ellis, Lynne Demaine, Clive James, Nigel Oram and Richard Dakin, our RUBOP Chairman David Brown, sales team ladies Pauline, Kate and Mary and Mick at the Country Park, Jim Lennon and Kevin Hemsley for ringing and box monitoring and the Rushcliffe BC for financial help.

Obviously, an ongoing operation like this needs money, mainly for petrol and box construction and hardware. We have a Box Sponsorship scheme that is £50 which covers 5 years and are also happy to accept any donations so if you've enjoyed the Barn Owl Diaries and wish to help with a donation, please contact me via the RUBOP website.

I hope you've enjoyed the Barn Owl diaries as much as I've enjoyed writing them; we've had an unbelievable year which hasn't finished yet. Tomorrow, we start putting up more boxes ready for next year and with so many young Barn Owls out there looking for new homes, you never know, it might be even better than this year!! Roll on. 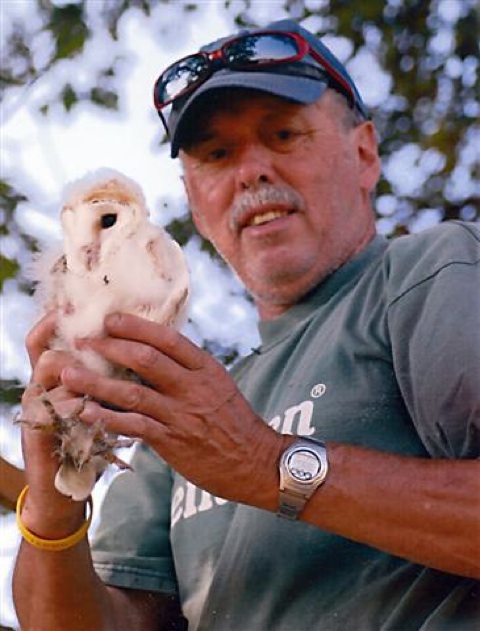 Thanks for reading (Photo: Ellen Broughton)

To find out more visit the RUBOP website.
Written by: Howard Broughton