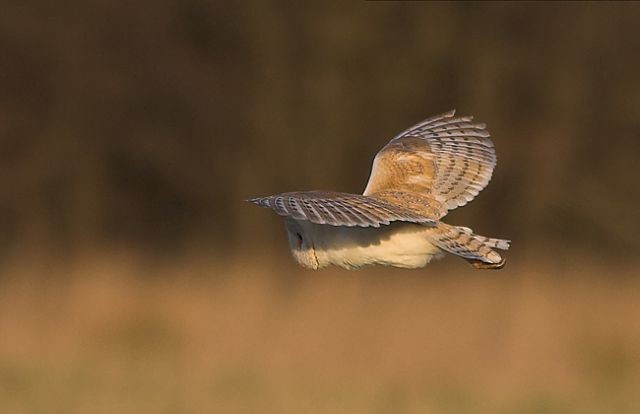 Rushcliffe Barn Owl Project (RUBOP) operates in the borough of Rushcliffe in south and east Nottinghamshire and was originally founded in the late 90s by a group of conservationists who wanted to put something back into the countryside. The project was dreamt up by Clive James, who is a Barn Owl enthusiast and had a couple of captive Barn Owls in an aviary at his home. It was Clive who approached the Rushcliffe Borough Council about the scheme; councils at this time were looking for conservation projects to back and the council were very enthusiastic, finding money and grants to pay for equipment including a trailer, two triple extension ladders, various tools and timber for the boxes, which were to be made up by the local prison. Box design was based on the triangular 'A frame' design of the Hawk and Owl Trust and the basic design remains unchanged eight years later.

One of the founder members was a local farmer and his farming mates were soon canvassed to see if they'd be interested in having boxes on their farmland. The Rushcliffe BC had also developed a new Country Park on the southern edge on the village of Ruddington. The site had formerly been a MoD bomb and munitions factory and later a Ministry of Supply depot where thousands of surplus Army vehicles were sold by auction.

The site was cleared, a lake installed, thousands of native trees and shrubs planted and grassland developed. The project's first task was to erect nest boxes on the park. The lack of suitable trees and ongoing threat of vandalism meant that the use of boxes on high telegraph poles was the only option, an expensive business, but possible with sponsorship from the council and valuable assistance from the electricity board who drilled the holes and lifted the poles and boxes into place. So by 1998, with seven boxes in place, the project was up and running and work then started on finding farms with suitable habitat and sites to hang boxes. 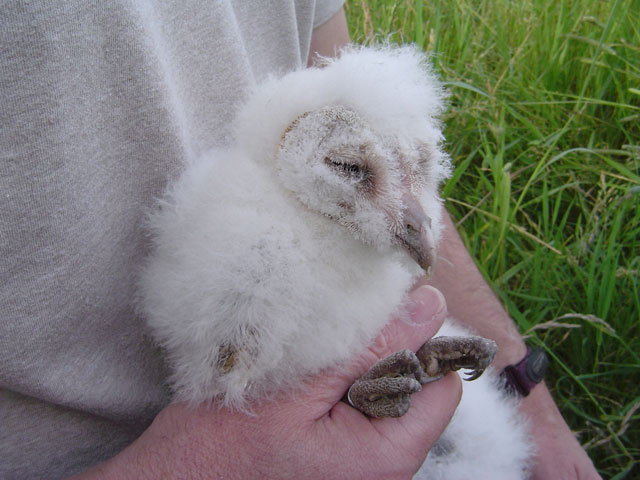 This was done in a very leisurely manner, the group going out one morning a week, erecting a couple of boxes and talking to farmers. Also, a couple of the ladies started fundraising by selling goods at local agricultural shows and, at the same time, getting publicity for the group. Clive James started a round of visits to schools, Women's Institutes and other groups, developing a slideshow for his talks and taking a captive-bred Barn Owl, Speedy, with him.

Speedy soon became a firm favourite with the local kids and over the last seven years, has been stroked by just about every kid in Rushcliffe. He's now 17 years old and was last year awarded the Mayor of Rushcliffe's Conservation Award.

It was at about this time, in 1999, that I heard about the group; there was an advert in the Notts Birdwatchers newsletter asking for volunteers - it was local to me, so I made the call. I was made very welcome - after all, an ex-firefighter, expert in the use of ladders, ropes and big hammers would be an asset to the group. I also knew a bit about birds; the others in the group weren't birdwatchers but had interests in things like badgers, bats and old breeds of cattle. I was able to bring a fresh approach to the group; the boxes were quite heavy and a struggle to lift and I devised a new method using ropes, a pulley wheel and sling to take the weight and a new upper bracket which enabled us to hang the box on a headless nail before nailing into place. We continued to erect new boxes and at the same time to inspect the boxes already in position. For over a year, we didn't get a sniff of a Barn Owl: no sightings, no pellets and no feathers. However, the local Stock Doves and Jackdaws thought the boxes were marvellous and were soon raising their families inside them! 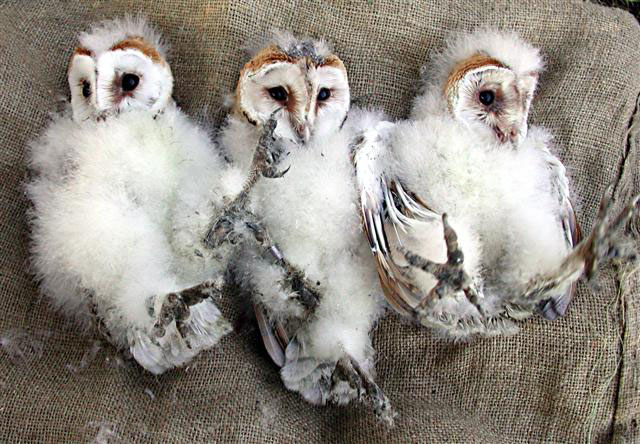 Then in the spring of 2000, a farmer reported to us that he had a pair of Barn Owls nesting in his hay bales but the nest had been accidentally destroyed by his farm workers taking out bales, unaware that the owls were there. We immediately put a box on a nearby tree and the owls went straight in and laid four eggs. Two hatched but tragedy struck again when the female accidentally drowned whilst attempting to bathe in a water butt; however, the male continued to bring in food and the two chicks eventually fledged. At the same time, another pair in a box raised another two young, giving us four chicks raised in our first breeding year.

The improving habitat at Rushcliffe CP started to attract Barn Owls and we had our first breeding there in 2003. The following year, two of the boxes were used, raising four chicks, and one or two pairs are now resident on the park with three of the seven boxes being used for breeding and three more having shown signs of use. All of our chicks to the end of 2003 had been ringed by our friends at the South Notts Ringing Group. At the beginning of 2004, I applied to become a ringer of Barn Owls and completed my course by the end of the year with a licence to ring the species found in the boxes, namely Barn Owls, Tawny Owls, Little Owls, Kestrels, Jackdaws and Stock Doves.

2005 saw another big increase for us with 17 pairs raising 56 young. I ringed many of these myself with the SNRG continuing to ring some of the pairs as a contribution to the BTO's Barn Owl Monitoring Program. With so many young Barn Owls around, borne out by the high number of sightings sent in to the Notts Recorder, we were hoping that 2006 would see a massive increase in breeding pairs. Barn Owls can breed in their first year and though the year started well with many pairs in territory, a cold spring and poor vole year dashed our hopes. Quite a few pairs that we'd found with eggs and small young in the early inspections had abandoned the boxes by mid-June. We had five pairs fail after laying and we heard a lot of bad news from other areas of the country with tales of a complete collapse of breeding birds.

We were resigned to have a poor year but things got unexpectedly better; when checking the breeding boxes for second-brooding pairs we found three large broods of two sixes and a five and with SNRG chipping in with another two, we passed our previous record year with 59 fledged young and in the process passed the 200 fledged young barrier.

Over the years we've continued to erect nest boxes: we now have over 150, working with the farmers who are participating in the DEFRA schemes designed to make their farms more nature-friendly, and Barn Owls are doing well in farmland where farmers have left unsown strips along field edges. These can hold large numbers of prey species and make hunting very easy as the owl has only to fly up these narrow strips to help themselves, a bit like supermarket aisles. 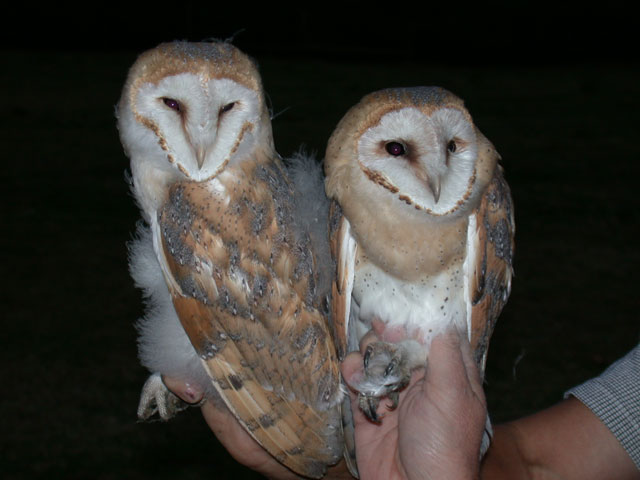 Over the years, we've designed our own equipment and honed our techniques in catching and processing the adults and chicks with a minimum of disturbance. We used to catch the adults in a fishing net as they left the box, but now they're caught inside the box after the exit hole has been blocked. They can become quite submissive and play dead making them easy to catch; however, you can never let go of the legs or they'll grab you very quickly, and their talons are very sharp. We work to quite a strict timetable. Box erection and maintenance is best carried out over the autumn and winter months; we then leave the boxes over the late winter and spring as owls can be paired off in the boxes and well left alone.

Egg laying usually takes place in April and the first box inspections start about mid-May when clutches are complete and hatching should have started. It's then the only time that you can catch both adults: after this time, the males are kicked out by the female and only visit the nest to deliver food. The females can be caught in the box up to the chicks being a month old and after this time; she too leaves the box and helps the male with the hunting.

So we visit every box in the last two weeks in May, any chicks are aged and we return to do the ringing when they're about six weeks old when it's possible to sex them and nest mortality will be at a minimum. After this, it's another round of box inspections looking for any second broods - these are rare and they're usually in a nearby box, but we've had a few in the last few years. Then it's back to ringing and a return in the autumn to repair the box.

I'm delighted with the way the project has gone. I now arrange all the fieldwork and ringing and also take my turn on the sales store where we always get a good reception, especially with Speedy sitting nearby on his box. All in all, few things I've done have given me more satisfaction. Over the next few months, we'll be bringing you up to date on the week-by-week work of the project as we go through our spring box inspections.

Already this week, we received a message that some Barn Owl groups were already ringing chicks. These were very early indeed so I looked in 2 boxes to see what, if anything, was happening. The first box, which had raised 2 chicks last year, gave no sign of a Barn Owl presence; in fact a friend had only recently told me that she'd seen Stock Dove going into the box. I stuck the blocker into the hole, put up the ladder and opened the box. There was an unringed pair and one egg in the box; I caught and ringed the male but left the female alone - I can probably catch her in a month's time but if I don't, it's not the end of the world, the important thing to me is that she lays more eggs undisturbed. The second box was of my best pair last year - they had laid eggs at the end of February, raised 3 chicks which had fledged by the end of May, and then raised a second brood of 6 in July.

Both birds were in the box with 6 eggs. I again caught the male; he was already ringed so I took his details. Both males were returned to the boxes after ringing and they all stayed in when I left. This male had been ringed in a Hawk and Owl Trust box about 6 miles away. So good news that the boxes were occupied and not so advanced that I have to change my inspection plans. I'll start by box inspections as scheduled in mid-May and let you know how we get on.

To find out more visit the RUBOP website.
Written by: Howard Broughton