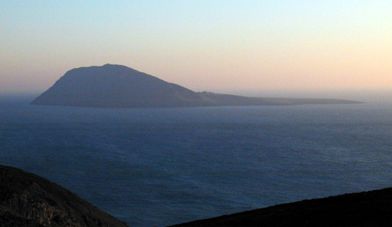 Bardsey Island, or Ynys Enlli (its Welsh name), lies just off the tip of the Llyn peninsula in North Wales. From the mainland, the 444-acre island looks like a jockey's cap facing right. The steep and precipitous eastern face of the island shoots up out of the sea, peaks some 546 feet later and then rolls down a more gentle west side for 350 feet before levelling out into the rich lowlands that form the peak of the cap.

Bardsey has long been associated with birds. In 1919 and 1920 N F Ticehurst published, in British Birds, a series of notes from the island of birds seen during a trip in the early 1900s. Since then a number of bird and natural history notes have been published by visitors to the island.

It was the early 1950s a group of keen birders and naturalists from the West Midlands decided that Bardsey would be an excellent site for studying not only birds, but also the whole complex ecology of a small island. In 1953 the Bardsey Bird and Field Observatory was opened. The observatory is based now, as it has always been, at 'Cristin', a farm building 150 years old. The building, one of eight on the island, was built by the late Lord Newborough, the one-time owner of the island. The two houses and outbuildings which make up the observatory complex are now owned by the Bardsey Island Trust and rented to the Observatory. The Trust was formed in the late 1970s to buy the island, with its main aims to conserve the rich heritage and natural history of the island. The Observatory has room to accommodate up to 12 staying guests on a weekly basis and has just undergone major refurbishment to make it more comfortable.

The main aim, as with all bird observatories, is to study the birds, and primarily migrant birds. Bardsey is famous to the general birding public for a handful of things: its night time attractions of birds to the lighthouse, its sizeable colony of Manx Shearwaters, its large arrivals of Willow Warblers in spring and autumn, and its claim to having the only record of Summer Tanager this side of the Atlantic. 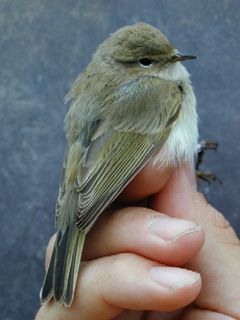 As well as the rare migrants, common migrants arrive on the island in sometimes huge numbers. Spring migration begins in early March with the arrival of the first Chiffchaffs and Goldcrests. By mid-month the first Wheatears and Swallows have arrived and the Manx Shearwater colony begins to erupt into noise at night. April sees more migrants arriving, with up to 2000 Willow Warblers being a regular occurrence. Hundreds of Sedge Warblers and Whitethroats pour through the island, many of them trapped for ringing. Come May flycatchers are becoming frequent and it is not unusual to encounter tallies of over 50 Spotted Flycatchers at the log call in the evening. It is in May when many of the scarce birds arrive and the island has been host to up to six BB rarities in one day as well as many other commoner rarities like Golden Orioles and Woodchat Shrikes. Also during May, the 16,000 nesting pairs of Manx Shearwaters are all coming ashore on the moonless nights and the whole island is a cacophony of noise. In the summer months of June and July the island quietens down for migrants, though the odd Black-headed Bunting can still arrive as well as Melodious Warblers and Common Rosefinches. However, the steep cliffs on the east side of the island are now the noisy hustle and bustle of a seabird colony, with some 2500 pairs of Razorbills, 500 pairs of Kittiwakes, 300 pairs of Guillemots, 100 pairs of Shag and about 1000 pairs of Herring and Lesser Black-backed Gulls. The resident Choughs are also in abundance at this time of year, as the family parties of fledglings congregate high on the hillside and can number 50 or more at times when augmented with wandering non-breeders from the mainland. 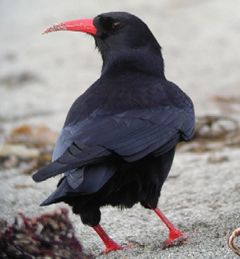 Late July sees the start of a protracted autumn migration and the best time to see Greenish Warbler on the island. Willow Warblers start to move through and by early August can number in excess of 3000 in a day. Later in the month, Sedge Warblers and Whitethroats peak with up to 500 of each regularly seen. By early September, autumn begins to arrive with the first Redwings being seen and the chance of a Nearctic warbler lurking in the bushes. The island has never been 'famous' as a seawatching site, though can still have very impressive days. September 13th 2001 saw 1 Red-throated Diver, 108 Fulmars, 11 Sooty Shearwaters, 4143 Manx Shearwaters, 2 Balearic Shearwaters, 1 Little Shearwater, 2 Storm Petrels, 1 Wilson's Petrel, 69 Leach's Petrels, 637 Gannet, 4 Arctic Skuas, 6 Great Skuas, 2 Long-tailed Skuas, 2 Sabine's Gulls, 138 Kittiwakes, 2 Sandwich Terns and 46 Razorbills pass the north end of the island. By late September and into early October larger numbers of thrushes, finches and Starlings begin to arrive as well as Blackcaps and Chiffchaffs. The new moon period in October is probably the best time to see the nocturnal phenomenon of lighthouse attractions. This is when, at dusk, birds leave their daylight staging area, only to hit poor weather en route. However as visibility is usually poor in these conditions the birds continue moving until they see light. This is sometimes streetlights in towns, and at other times lighthouses. The birds are drawn to the beams, and many to their death as they collide with the tower. Nowadays, powerful halogen lamps are used to attract the birds to the ground and safety. On occasions up to 7500 birds have been recorded on the ground in from of this 'false' lighthouse with many more still circling the tower. It is also at this time of year when some of the rarer birds are found on the island. For example in the past five years, three or four days after the new moon, there have been Lanceolated Warbler, Eyebrowed Thrush, Iberian Chiffchaff and Blyth's Reed Warbler.

One of the best years the island has seen for a while was last year, when in April and May alone we had several large falls of common migrants as well as several really cracking rarities. On 30th April there was a good arrival of migrants including 500 Willow Warblers, 98 Grasshopper Warblers, the first Pine Bunting for Wales and the island's second Iberian Chiffchaff. In May we saw the second Collared Flycatcher in as many years, as well as a Bonelli's Warbler which stayed for a week. With the likes of Bluethroat, Nightingale and Nightjar, three species of harrier, Honey Buzzard and Goshawk, Snowy Owl and Hawfinch as backup, Bardsey was definitely the place to be last Spring!

Visitors are of course always welcome to the Observatory and can help out or watch with the usual activities of ringing and counting migrant and resident birds. Bookings can be made through the Bookings Secretary, Mrs Alicia Normand (tel. 01626 773908). More information about the island can be found on the BBFO website at www.bbfo.org.uk.