Avian Influenza - Migratory Birds: Innocent Scapegoats for the Dispersal of the H5N1 Virus 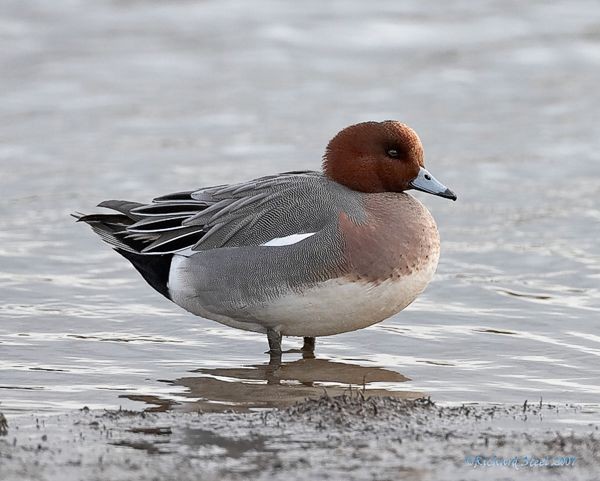 Wigeon: It is clear that the trajectory of the virus does not correspond with the main migration routes of wild birds (photo: Richard Steel).

A review to be published shortly in the British Ornithologists' Union's journal, Ibis, critically examines the arguments concerning the role of migratory birds in the global dispersal of the highly pathogenic avian influenza virus H5N1. Ecologists of the Station Biologique de la Tour du Valat and of the GEMI-CNRS in the Camargue (France), Michel Gauthier-Clerc, Camille Lebarbenchon and Frédéric Thomas conclude that human commercial activities, particularly those associated with poultry, are the major factors that have determined its global dispersal.

H5N1 was first detected in poultry in November 1996 in south-east China. The virus subsequently dispersed throughout most of Asia, and also to Africa and Europe. From mid-2005, migratory wild birds have been widely considered to be the primary source of the dispersal of H5N1 outside Asia. This claim was based on the discovery in May 2005 that hundreds of wild birds had died on Lake Quinghaihu, on the high Asian plateau in China. It is however clear that the trajectory of the virus does not correspond with the main migration routes of wild birds. The global network of migration routes seemed to hide the globalisation - without strict health control - of the exchanges of poultry, the more likely mechanism for disease spread.

During the previous epizooties of highly pathogenic subtypes of H5 and H7, it was shown that the expansion of these viruses was due to human activities, in particular, movements of poultry or their products. This commercial scenario is the one that explained the expansion and the maintenance of the H5N1 virus in south-east Asia until 2004, via the legal and illegal trade in poultry.

The cases in western Europe in February 2006 after a cold spell on the Black Sea showed that the virus can spread through infected wild birds travelling short distances, but no evidence for long distance transmission during seasonal migration has yet been found. The evidence overwhelmingly supports the hypothesis that human movements of domestic poultry have been the main agent of global dispersal of the virus to date. The occurrence of an outbreak at a commercial turkey farm in Suffolk, England, in February 2007 fits this wider pattern.

Wild birds, particularly waterfowl, are a key element of the viral ecology of low pathogenic avian influenza. Very high densities of domestic animals and increased stress factors are particularly favourable for the maintenance and transmission of virulent agents, in particular subtypes of highly pathogenic influenza. Paradoxically, the H5N1 virus coupled with a fear of transmission by wild birds could lead to a reversion to battery farming which increases risk of outbreaks. This would stall the current trend to better animal welfare resulting from free-range agriculture. Maintaining these trends, whilst controlling disease through strong veterinary scrutiny and control of trade, is more likely to be a successful strategy.

Ibis is the official journal of the British Ornithologists’ Union (www.bou.org.uk) and publishes original papers, reviews and short communications reflecting the forefront of research activity in ornithological science, but with special emphasis on the conservation, ecology, ethology and systematics of birds. Please visit the journal website for further details: www.blackwellpublishing.com/ibi.