New research has cited Australia as the birthplace of the most common bird nest structure found worldwide today, and that these nests may be the key to many species' success.

The findings, published in Proceedings of the Royal Society B and produced by Macquarie University, Sydney, looked at the nest of passerines and found that the ubiquitous 'open cup' nest evolved in Australia multiple times over 40 million years ago.

The birds resulting from these open cup nesting lineages gave rise to many of the world's birds today, and this study suggests that the open nests were perhaps a key to their success — measured both in terms of how many species they evolved into, and how far they have spread around the world.

Professor Simon Griffith, of the University's Department of Biological sciences, explained: "Among the passerine birds — which make up 60 per cent of the world's birds — most species today build open cup-shaped nests, and only a minority build more elaborate roofed structures. The study shows that open cup nests evolved multiple times independently during early passerine evolution on the Australian continent, eventually becoming the most common nest type across the world today." 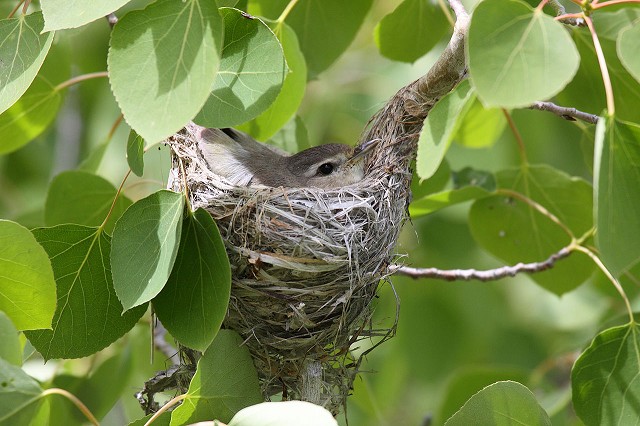 The origins of open cup nests, such as this Warbling Vireo, are thought to lie in Australia (Photo: Gary L Clark/wiki commons)

The fact that these common open cup nests appear to have arisen several times in different lineages, but around the same time, suggests that this was driven by the emergence of new predators or parasites or with changing climates and habitats.

Professor Griffith added: "Until now we had assumed that more complex fully roofed nests had evolved from those without roofs. This study demonstrates that in fact it was the opposite, in that these simple nests evolved several times independently, and the bird families that made this switch to simple nests are some of the most species-rich bird families today, such as the Australian honeyeaters.

"This research really underlines the importance of Australia as the source of much of the world's avian diversity — Australia was the birthplace for which many key features of birds started out and still holds representatives of many of the ancient families."