This last weekend saw delegates from around the country battle through the snow to attend the BTO's Annual Conference in Swanwick, Derbyshire. Over 250 volunteer surveyors, ringers, nest recorders and members heard talks on a wide range of subjects and met staff and other volunteers. 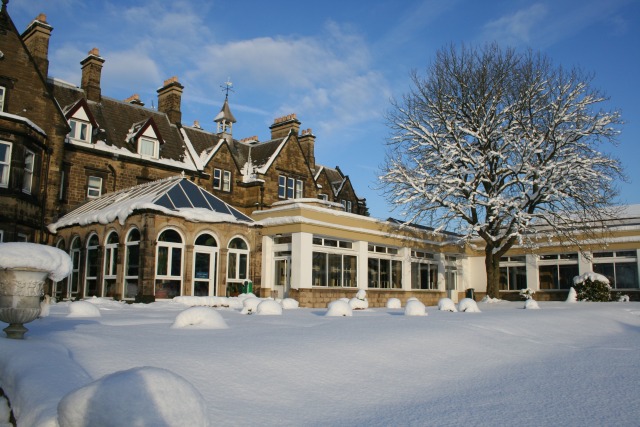 Here we give a brief summary of some of the highlights of the conference. More detail on some of the topics will be covered in the coming weeks.

Chris Packham — 100 things that have caught my eye

The conference began with a Friday night talk by the BTO's new vice-president, Chris Packham. In his own inimitable style, Chris talked us through his long-held passion for photography and showed some stunning bird, wildlife and habitat images. The BTO is truly lucky to have the support of Chris.

The first evening then climaxed with the inaugural BirdGuides quiz, which was a mix of doctored images, stretched and warped sounds and general ornithological trivia. Well done to the winning team, which suspiciously included BTO Director, Andy Clements.

The meat of the conference you could say began with the hot topic (no pun intended) of the impacts of climate change on our birds. Ruud Foppen from SOVON, the BTO's sister organization in The Netherlands, gave us an excellent introduction to the impact of 'phenological mismatching'. This sounds quite horrendous, but the concept is simple. As spring comes earlier, insects are able to react more quickly and start breeding earlier, hence the peak of caterpillar numbers will also be earlier in the year. This then 'catches out' birds, especially species like Great Tit, which aren't able to react so quickly. So when there are a nestbox of hungry beaks to fill, there are no longer the caterpillars available to feed them. Ruud showed how this mismatch is potentially a serious problem for tits, but also for species such as Pied Flycatcher, and across Europe, the greatest population declines are seen in woodland species showing the least change in arrival date. From the birds' point of view, the answer would be to continue spring migration for an extra couple of days to an area where spring has yet to spring, buy as yet they have been unable to do this. 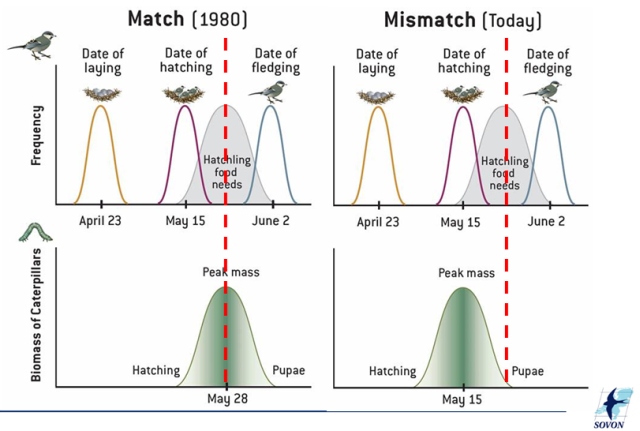 The recent shift to an earlier peak in caterpillar abundance will catch out those species which are unable to bring forward their breeding season. (Graphic: Courtesy of SOVON.)

Ruud's introduction was followed by a summary of some of the BTO's own climate change work, by Dr James Pearch-Higgins. He presented the first results from the BICCO-Net project, which is a review of how populations of a wide range of groups respond to climate change. 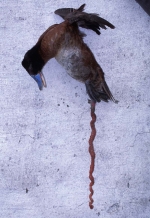 'Professor of Promiscuity' Tim Birkhead, from Sheffield University, gave the keynote Witherby Lecture this year, looking at the world of sperm competition and promiscuity in birds. Professor Birkhead is one of the best communicators of science, and his history of the study of evolution and adaptation was riveting. He then lead us through the quite complex study of the sexual arms race in birds, and how often bizarre adaptations come into being. In some species there is good reason for this, with rates of extra-pair paternity (illegitimate offspring) up to 75% in species such as Reed Bunting. From the prolonged copulation and enormous testes of the Aquatic Warbler to the enormous phallus of some ducks, including the Argentine Lake Duck (right) whose phallus is longer than its body (female ducks deal with such excess by having specially morphologically adapted organs themselves), this was an fascinating and accessible summary of current knowledge.

The final event of the morning was the annual presentation of the BTO medals. There are two medals awarded, each recognising an outstanding contribution to the work of the BTO. The Tucker Medal is awarded for "outstanding service to the Trust — i.e. for outstanding contributions to the Trust's scientific work, through Trust surveys or Trust-aided investigations." The Jubilee Medal is then awarded for "committed devotion to the Trust — i.e. for contributions to the Trust other than directly to its scientific work." This year the recipients were Hugh Insley (Tucker Medal) and Chris Thorne (Jubilee Medal). Hugh is based in the Highland region, and is a tireless ringer, Atlas-er and Regional Representative for the BTO. Chris' award recognises his long-term work at Wicken Fen (Cambridgeshire), where over the years he has trained over 20 ringers and made a massive contribution to monitoring on the site. Congratulations to them both! 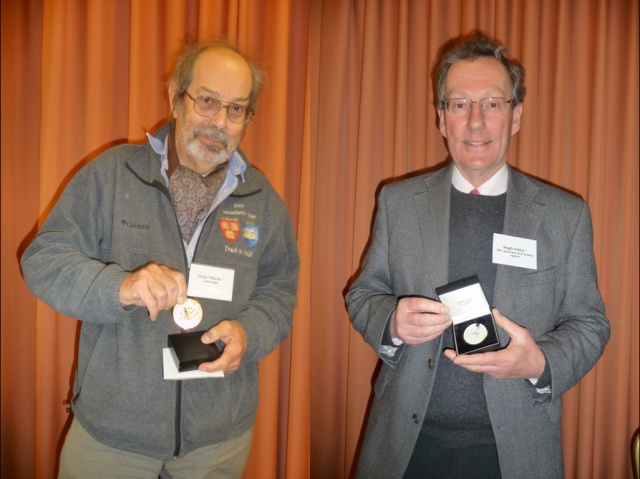 Straight after lunch, the first afternoon session focused on the epidemic spread of Trichomonosis in garden birds. The appearance of the pathogen in 2005, and its epidemic spread in 2006 and 2007, caused a measurable decline in the national population of Greenfinches (35%) and Chaffinches (21%). Scaling up, over a million birds must have suffered this lingering death. The spread of the disease was well-monitored by the Garden Bird Health Initiative (GBHi) and we'll be running a more in-depth article on this soon. 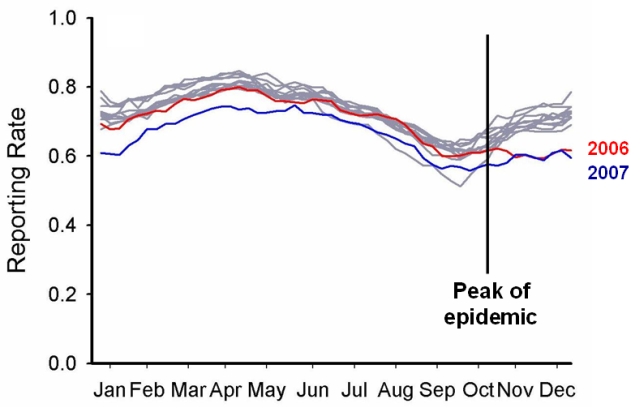 The impact of the Trichomonosis epidemic in 2006 and 2007 is evident in the decline in reporting rate in the BTO's Garden BirdWatch scheme. (Photo: BTO.)

Dr Karen Haysom from the Bat Conservation Trust then gave us an introduction to the National Bat Monitoring Scheme. For those of us who know little about bats, this was a fascinating talk, and again we'll be featuring the NBMS in further detail soon.

The session ended with two BTO speakers. Paul Stancliffe, BTO Press Officer, gave a summary of one of the biggest news stories of 2010 — the tracking of a Nightingale from Cambridgeshire to its wintering grounds in Guinea-Bissau. This work, in collaboration with the Swiss Ornithological Institute, gives and amazing insight into the migration process for this declining species, and raises the bar for future studies. 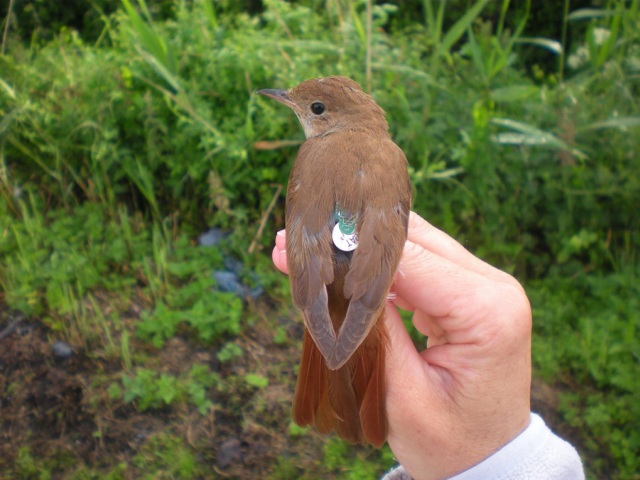 This Nightingale was tracked from its breeding grounds in the Cambridgeshire Fens to its wintering grounds in Guinea-Bissau. The solar-powered GPS data-logger sits on the back like a rucksack. (Photo: BTO.)

BTO Director Andy Clements then gave a summary of the direction the BTO will be taking over the coming years, and also gave some exciting news which we broadcast earlier today.

The day then closed with ringers decamping to attend a workshop on getting more out of ringing, focusing on development of the BTO's demographic monitoring schemes (Constant Effort Sites, Retrapping Adults for Survival and the Nest Record Scheme). Non-ringers were then treated to an excellent film following the breeding biology of Goshawks by Garry and Mike Marchant, and Nick Moran then showed how survey data can be used to highlight the effects of the recent cold winters on birds. These included unusual large-scale movements, unusual bird behaviour and occurrences in gardens, and Nick also gave a summary of the evidence showing the measurable effects on the populations of certain species. 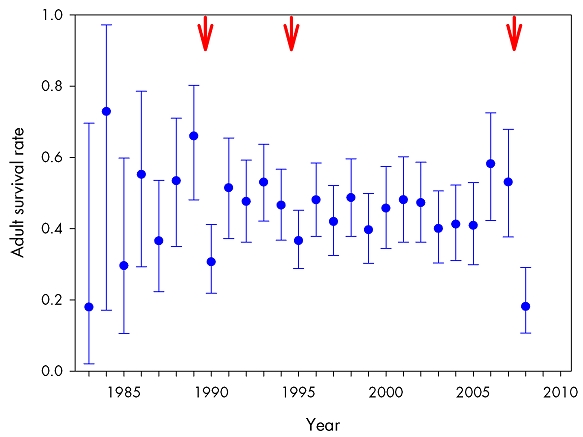 The impact of recent cold winters (marked in red above) on the survival rate of Long-tailed Tits is obvious, with the particularly cold winter of 2008/09 causing a change of survival from 40–50% to just 20%. (Graphic: BTO.)

Sunday morning began with a tour of some of the insect survey work being carried out at the moment. Katie Cruickshanks, from the Butterfly Monitoring Scheme, gave us an introduction to the scheme, to butterfly monitoring in general, and to how Breeding Bird Survey volunteers were also able to contribute.

Mike Toms, head of Garden Ecology at the BTO, then showed how butterfly records submitted by Garden BirdWatch participants can be used to investigate trends in populations, phenology and how important gardens are at wider spatial scales.

Lastly, Juliet Osbourne, of Rothamsted Research, showed the importance of bees in the wider countryside as pollinators of fruiting trees: not only apples and pears but, more importantly for birds, Hawthorn, Blackthorn and other hedgerow trees. The link is obvious, but vital nonetheless.

The conference ended with two excellent presentations on some of the problems faced by our woodland birds. Paul Dolman from the University of East Anglia presented results from an intensive project in Thetford Forest investigating the impact of predation on Woodlarks and Nightjars. The work had been carried out by using a network of remotely triggered infra-red cameras trained on nests, recording the comings and goings of parents and predators alike. Results from the cameras showed that some surprise predators were implicated in nest losses, and full details will soon be revealed when the work is published.

The BTO's own Rob Fuller then gave us a very worrying presentation about the impact of increased deer numbers on our woodlands. As populations of all five species rocket and spread, our woodlands are becoming increasingly bare. With heavy grazing pressure, the understory in woodlands as good as disappears, leaving no nesting habitat for a broad range of species. In some areas this has been responsible for local extinctions of species such as Nightingale and Sylvia warblers.

If this broad range of talks and research topics grabs your attention, then why not join the ranks of BTO members and supporters? There's a survey for everyone in the BTO, so do take time to browse the new, rebranded website and see how you can contribute. We'll then hope to see you at Swanwick next December.