Throughout October and November 2013, a Cattle Egret was reported regularly (although intermittently) from the Isle of Sheppey, in north Kent. The bird, first reported on 3rd October and last seen on 29th November, was generally to be found on the saltmarsh at Harty Ferry, at the south-east end of the island. Despite its being around for several weeks, we received no images directly here at BirdGuides — unusual for such a long-staying scarcity. However, towards the end of last year, Marc Read emailed me a link to Sussex birder Martin Peacock's blog, asking me to have a look at the egret featured in his post from 17th October. On opening it up and looking at the photos of the bird in question — the Harty Ferry bird no less — it was instantly clear that something was wrong. Though labelled as a Cattle Egret, there appeared to be multiple plumage and structural features at odds with that species, although it didn't really seem to fit any of the European or African egret species. I got in touch with Martin to express my thoughts, and he responded with the following:

"The pictures below are of the 'Cattle Egret' seen regularly around Harty Ferry on Sheppey back in October. It was my first Cattle Egret, so I spent some time checking the identification, photographing and learning about the bird. Although I was happy at the time that it could not be anything other than a Cattle Egret, I could not find any pictures on the web that showed examples of black legs and yellow feet as you would find on a Little Egret. The shape of the lower jaw also seemed to be different to the pictures that I was looking at but I put this down to the bird being a juvenile. Finally there was the fact that it was feeding on a saltmarsh along with other Little Egrets, when I would have expected to find it in pastures, feeding around cattle, or in similar habitats.

The shots were published on my blog back in October and I thought nothing more of it. However, since that time I have received queries suggesting that this may be a Little × Cattle Egret hybrid. I have searched the web but although this hybrid is recognised I cannot find any details on what the resulting bird would look like. This is getting a bit beyond my current levels of expertise and I wondered if there is anyone out there that can help me with the identification...

Finally, my apologies for the quality of the pictures. The bird was about quite distant and the pictures are heavily cropped." 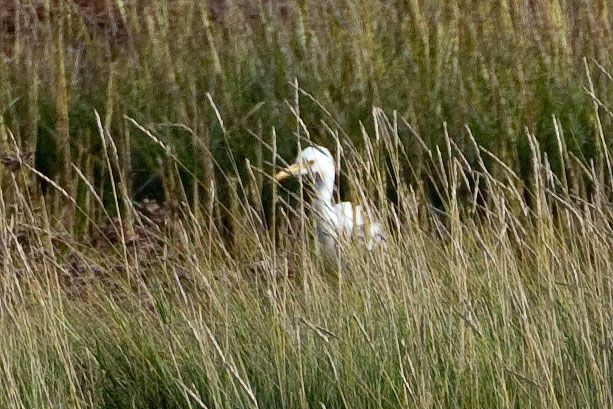 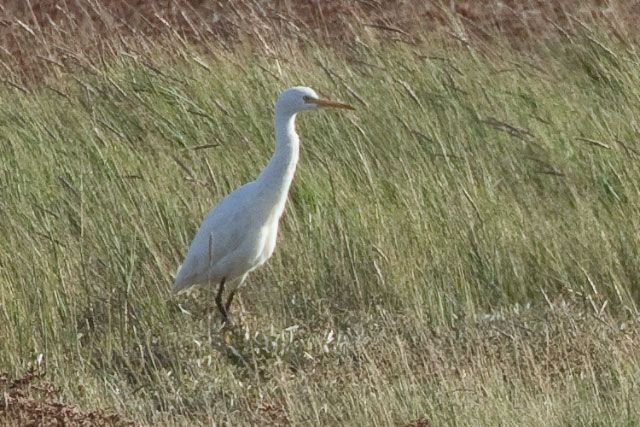 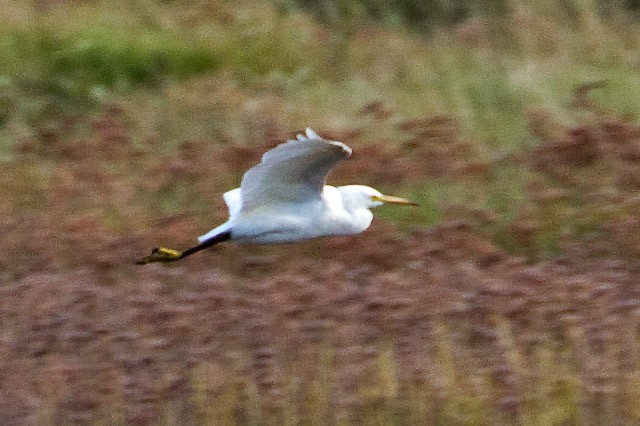 So, what is it? For starters, it seems quite clear that this isn't a Cattle Egret. Perhaps the most striking feature is the yellow feet (as in Little Egret), but there are other differences that point away from that as a diagnosis. For example, the bill is comparatively long, thin, and posseses a dark tip, while it also appears rather long-necked for that species. The legs are also rather long and spindly. Could it be an aberrant Little Egret? Personally, I'm not sure: facially, it looks quite Cattle Egret-like with those bright yellowish lores and the predominately yellowish bill (which is perhaps a little shorter than on your average Little Egret). Similarly, the neck, though longer than a typical Cattle, looks quite thickset and rather less 'snaky' than you'd expect in a Little Egret. This, along with the quite plump body and shortish legs, give it quite a dumpy, stunted feel. 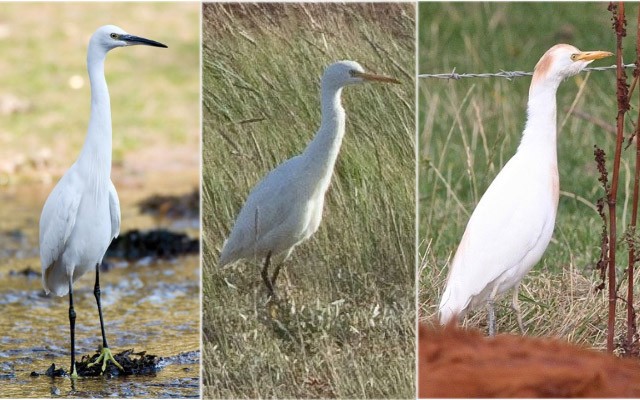 Another species with a yellow bill is Intermediate Egret but, like Cattle Egrets, they have black (not yellow) feet and are larger, longer-necked and more elegant-looking than Little Egrets (not smaller and short-necked as in the Kent bird). White-morph Western Reef Egrets would show paler, greenish legs and a duller bill, as well as a different structure. The bird is also clearly not a Great White Egret.

It is at this point that we mention the 'H' word for the first time. Hybrids between herons, egrets and their allies are rare but certainly not unknown. The Handbook of Avian Hybrids of the World lists Cattle Egret as having hybridised with both Little Blue Heron and Snowy Egret in the USA, and with Little Egret in both Europe and Africa. Furthermore, examples of Cattle Egrets apparently hybridising with Squacco Heron have been recorded in the wild in Spain and Italy (see here and here), while an apparent Cattle Egret × Night Heron has been recorded in captivity in Germany (see here).

Therefore, displaying characteristics seemingly intermediate between Cattle and Little Egret, could the Sheppey bird be a hybrid between the two species? Based on what we can see in Martin's photographs, such an assumption certainly seems reasonable. We'd love to hear your views and opinions on the bird — feel free to leave any comments in the section at the foot of this article!