Of the 560 species recorded in Britain and Ireland, there is a small cohort of 13 species which reside in Category B. Category B species are those 'which would otherwise be in Category A but have not been recorded since December 31 1949'. In other words these species are the rarest of the rare, so rare in fact that the chances of some of these species occurring here again is extremely unlikely, as in the case of the Eskimo Curlew.

Allen’s Gallinule is one of the mouth-watering rarities on this list. In gaudy adult plumage it is a slim mixture of blue underparts and olive-green upperparts. Immature birds are sandy brown and resemble a cross between a crake and a Ruff Philomachus pugnax, with heavily scalloped brown upperparts, but with the actions of a Moorhen Gallinula chloropus. It is generally a shy retiring bird of the tropical wetlands and lowlands.

The species breeds in West Africa during the wet season and moves south during the dry season with the main movement between October to February. It is unique in being the only species on the British and Irish list to have originated from the African tropics. Thus, it might be considered an unlikely vagrant to these shores, but as with other gallinules it is a habitual wanderer with vagrants recorded on Ascension Island and St Helena in the South Atlantic, Comoro Islands and Rodriguez in the Indian Ocean, over a thousand miles away from the nearest landmass. There have been over 20 records in Europe with sightings in Denmark, Finland, France and Germany and a number from Spain, Portugal and Italy. Many of the European records correlate well with the dry season exodus of birds from their breeding areas between October and February. 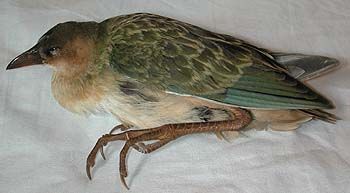 Amazing news reached the birding fraternity yesterday [10th February 2002] of a bird at Portland in Dorset. An immature was found exhausted early in the afternoon on the West Cliffs by a local person walking their dog. The bird remained alive for a little over an hour after being brought to the Observatory but died at 15:15. The first, and so far only, accepted record of this species in Britain and Ireland was a juvenile that landed on a fishing boat off the coast near Hopton, Norfolk on 1st January 1902. The bird was taken to a local taxidermist where it was kept alive for a short period of time. The record lingered under the escape caveat until 1974 when the BOURC finally accepted it. The 1902 record was part of an influx of five records in Europe.

Recently there have been two records from Spain, with a 1st-winter on 8th January at es Pagos, Porreres, Mallorca, which was released on 10th and another found at Benidorm on 26th January. It is also interesting to note that the first Western Palearctic record of African Crake, Crex egregia - another wetland crake that is an intra-African migrant - was recently noted on Tenerife. A combination of strong winds of a southerly origin at a classic time of year for this species would appear to account for the Dorset record and if one can make it, perhaps there is another lurking somewhere on a wetland in southern England or Ireland?