A season on Bardsey Island

On 18 March 2020, I managed to set off for Bardsey Island, this time as Assistant Warden. Things seemed even more idyllic this year than usual, in light of the impending lockdown in Britain. It wasn't all plain sailing (pun intended), though, as before we could even think about getting over to the island we needed a rather formidable stock of food ready for the year ahead. This entails stocking up on dried, tinned and long-life foods to serve us for the main part of the year, and as you can probably imagine, this was much more challenging in 2020 than it usually would be … pre-pandemic Britain saw supermarket shelves being rapidly stripped of pasta, rice, UHT milk and so on – all the things that we really need to be prepared for the year! Somehow, between many visits to the supermarkets, we managed to stock up sufficiently.

We got to the island in the afternoon of 18 March and once the boat was unpacked, we headed up to the observatory. On arrival, a Firecrest was singing in the garden, and it became quickly apparent that a Barn Owl had been using Steve and Emma's tractor shed as a roost site throughout the winter. It was still present, so was duly caught and ringed and then released in front of the obs; this was only the eighth to be ringed on the island. The remainder of the day was spent decanting the contents of the trailer into the gift shop for shelter, and then getting settled back into our island home. 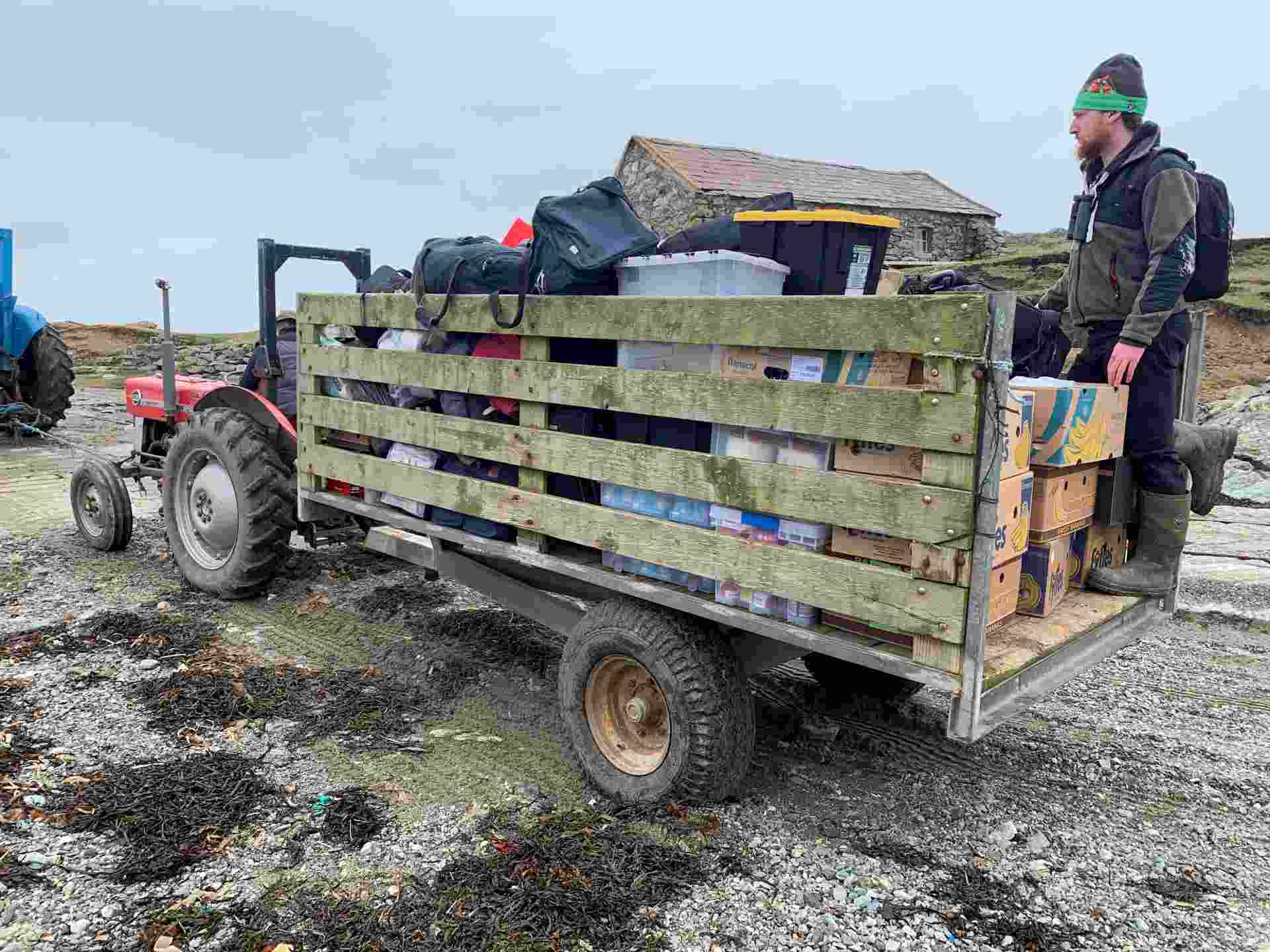 Taking supplies up to the observatory (George Dunbar).

Most of March was spent getting the obs back up and running, though we did manage to get a decent amount of both birding and ringing in. Three Firecrests, one Jack Snipe, one Black Redstart and a Danish-ringed European Robin helped to bring March's ringing total to a very respectable 246 by the month's end. Birding was reasonable too; warblers and finches began moving through the island in reasonable numbers, there was a good run of Black Redstarts and the first Swallow of the year flew south on 24th. 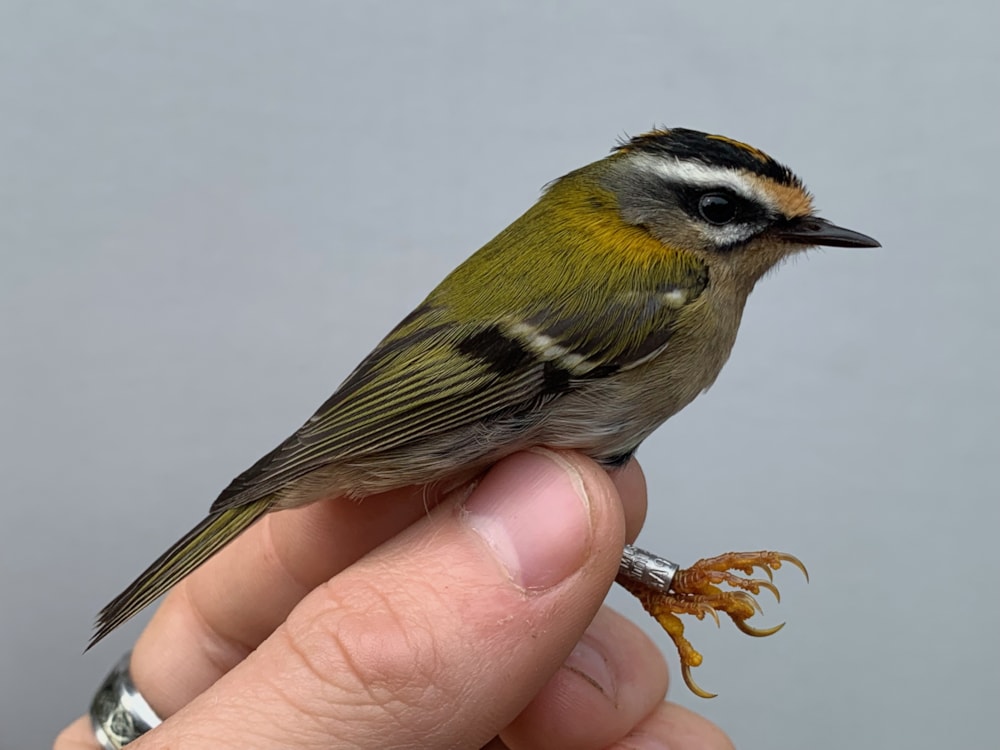 This Firecrest was one of three trapped and ringed in March (George Dunbar).

April is by far the best month in spring for volume of migrants on the island, with Willow Warblers being the most numerous of these and Blackcaps second. The first arrival of Willow Warblers was on 9 April when 101 were recorded; prior to this there had only been low double figures. The 11th produced 226 but the highest count of the spring was on the 16th, when 455 were counted across the island. This also coincided with the largest count of Blackcaps: 209. Both are very respectable totals for recent times. For example, the previous year's peak counts for Willow Warbler and Blackcap only reached 163 and 44 respectively.

The bird of the month was the Black Kite that flew north over the island on 26th, the only real rarity of the month. A Wryneck on 15 April was the first to be recorded in the UK in 2020; this isn't the earliest record for the island, though, as one was recorded on 7 April back in 2015. Finally, on 21st, a female Lapland Bunting appeared at the South End and remained there until 2 May. 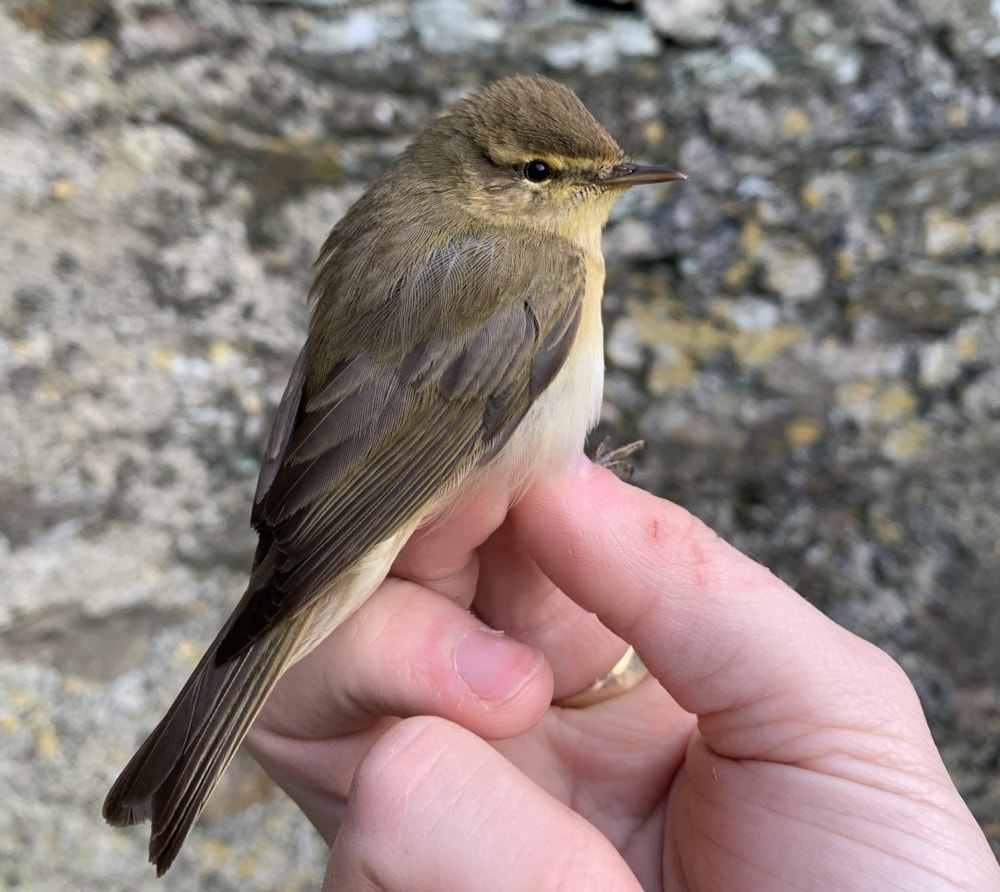 On 16 April, no fewer than 445 Willow Warblers were on the island (George Dunbar).

In May, the overall number of migrants on the island drops away, but as this happens the likelihood of something more unusual appearing increases. On 2nd, we trapped a Sedge Warbler which had been originally ringed in Diawling National Park, Mauritania, back on 5 February 2019 – an incredible control at 4,169 km travelled (as the Sedge Warbler flies). On islands, some species which you wouldn't look twice at on the mainland are very notable and Bardsey is no exception to this. For example, a drake Tufted Duck that landed on one of the island’s ponds on 9 May was only the 35th record since records began in 1953. Excitement then died down until nearer the end of the month …

On the morning of 29 May, before heading out for census, I was in the kitchen making a coffee when a Greenish Warbler began singing in the obs garden; it was trapped, ringed and remained there for the rest of the day, even singing again that evening. This was the 20th record for the island, but the 10th spring record in the last 10 years. After this, a European Turtle Dove was found down in the crop field at Ty Pellaf – these are becoming an increasingly uncommon sight on Bardsey as their numbers dwindle in Britain. 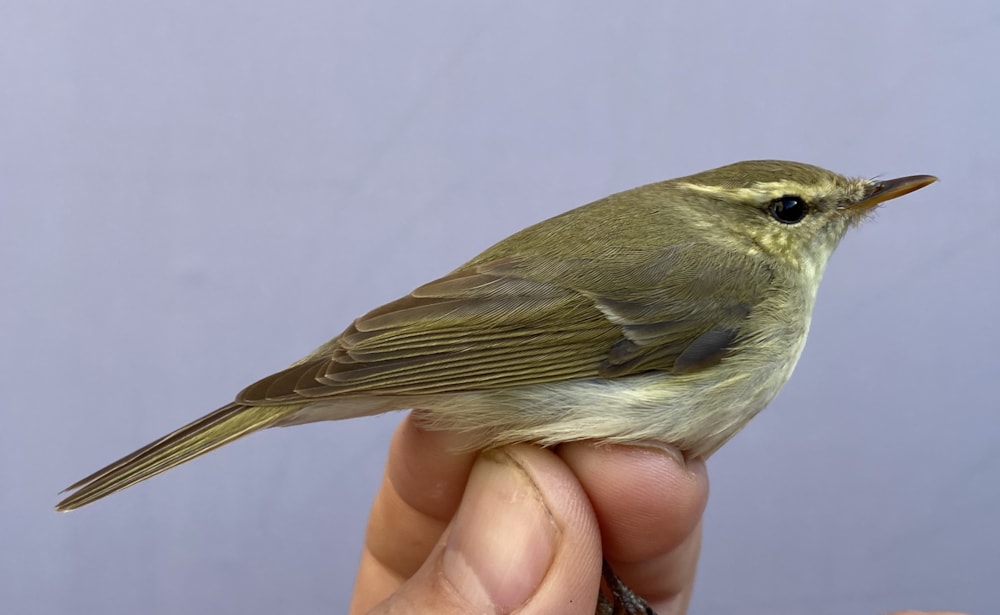 This Greenish Warbler was one of the ringing highlights of the year (George Dunbar).

It had already been a great day, but the best bird was to come at Nant. Initially, it seemed as though there wasn’t much about, with the first couple of laps of the plantation only yielding a couple of Spotted Flycatchers and a Garden Warbler, so I sat down to call my parents as this is one of the few areas of the island with phone signal. While sitting there, a family party of European Stonechats started quite alarmedly mobbing a larger bird sat on the barbed wire fence some 30 m away.

I raised my binoculars while still on the phone to my mum and instantly realised what it was – a female Woodchat Shrike! I threw my phone to the ground and got a few pictures before calling Steve and Sam to let them know. I'm still not sure Mum has forgiven me … oops! We watched the bird for the rest of the day as it fed almost constantly in the Mediterranean-like heat of the afternoon. This was the 28th record for Bardsey. 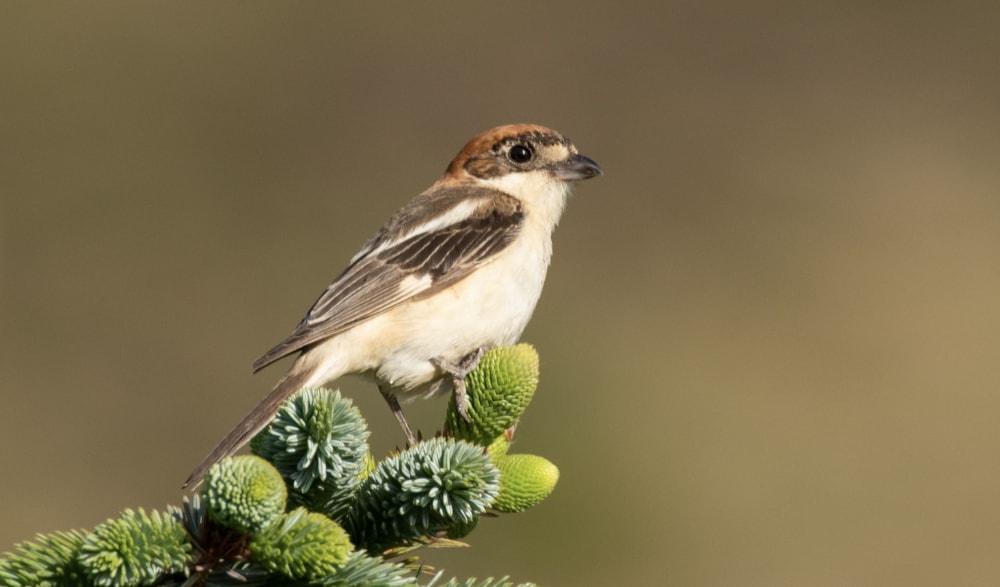 May ended with a bang when George found this Woodchat Shrike (George Dunbar).

The following day, 30 May, was another scorcher and I was out finishing the Eurasian Oystercatcher survey which I had started the day before. I had just passed the South Hide and was making my way to the southern tip of the island when I heard a strangely familiar call. I couldn't see anything for a minute or so but then noticed a lark flying away out to sea. Luckily, it banked and returned to the land where it sat only 15 m or so away: a Shorelark. This was the 19th record for the island, the last was five years ago to the day in 2015. Luckily, Steve and Sam caught up with it before it left to the north. It was time to head back to the obs for dinner after finishing the survey. While cooking tea I realised an Acrocephalus warbler was singing in the garden. It was a Blyth's Reed Warbler and seemed to be in the garden for only 15 minutes before leaving to the north along the mountainside.

My other personal main highlight of the year was European Storm Petrel and Manx Shearwater ringing in June and July with Josie Hewitt and Dan Owen. Bardsey holds around 30,000 pairs of Manx Shearwaters and the bulk of the adult ringing takes place at this time of year. The grand total at the end of the year was 1,474 new birds ringed – the highest since 2005! Storm petrels have somewhat of a more mysterious presence on the island – they nest in crevices in boulder scree, walls, buildings … wherever they can find a suitable nest cavity really.

Before this year, the highest total ringed in a single year was 126 in 2016. This year, the site of the net was changed to an area I’d often thought looked good for catching them, at Bae y Rhigol. It proved incredibly successful as, by the year's end, 321 had been ringed on the island, the majority at this new site. We had one foreign control, a bird which had been ringed two days previously (20 July) at Alderney Bird Observatory in the Channel Islands, meaning it had covered at least 382 km in this time – not bad for a bird weighing only 30 g! Earlier in the year, we tried catching some just outside the observatory building. We were less successful here (as expected), but we did have another foreign control, this one had been ringed at Le Conquet, France, on 13 June 2018. It was an excellent year for ringing European Storm Petrels on Bardsey (George Dunbar).

My final highlight must be the actual privilege of being able to live and work on the island last year. This was my sixth consecutive year visiting Bardsey. I first visited on NGB weeks in 2015, 2016 and 2017, I then volunteered for three weeks in 2018 and finally for three months in 2019, before getting the Assistant Warden role for 2020. It was a fabulous experience, and one I shall hold with me throughout whatever I go on to do. This isn't to say that living here doesn't come without its challenges, because it is most certainly tough at times, on both a physical and a mental level. In this year especially, it did occasionally feel very isolated at times, but it is such a beautiful place to live that it isn't difficult to find solace in a walk around the island. It's a sad goodbye to the island from me, but it will always feel like home. 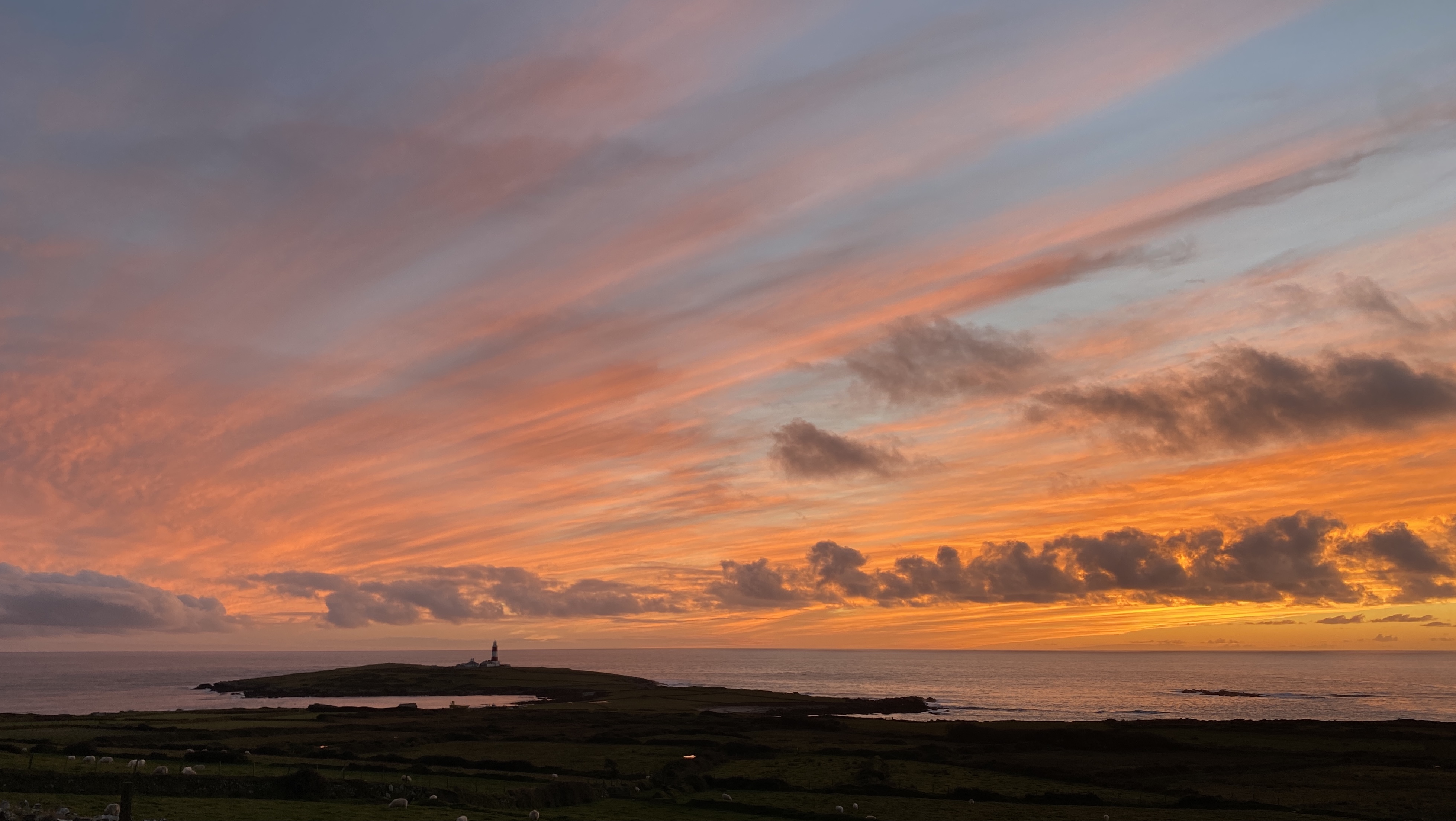