A recent study, published in the Journal of Wildlife Diseases, found that the parasite that causes toxoplasmosis has become widespread in Hawaii and now infects as many as 48 per cent of some Hawaiian Goose populations.

Hawaiian Goose nearly became extinct in the 20th century, with just 30 individuals remaining in the wild in 1950. Thanks to intensive captive breeding programme, an estimated 2,800 geese now live on four of Hawaii's main islands — though they remain protected by the US Endangered Species Act.

However, Hawaiian Goose's recovery now faces a new challenge. According to the study, the geese have become increasingly infected by Toxoplasma gondii, the protozoan parasite that causes toxoplasmosis. Researchers found that the birds on the island of Molokai, the island which had "a conspicuously consistent presence of feral cats," also had the highest rates of infection, with 48 per cent of tested geese carrying the infection. Infections rates on Maui and Kaua'i, where feral cat populations are lower, came in at 23 and 21 per cent respectively. 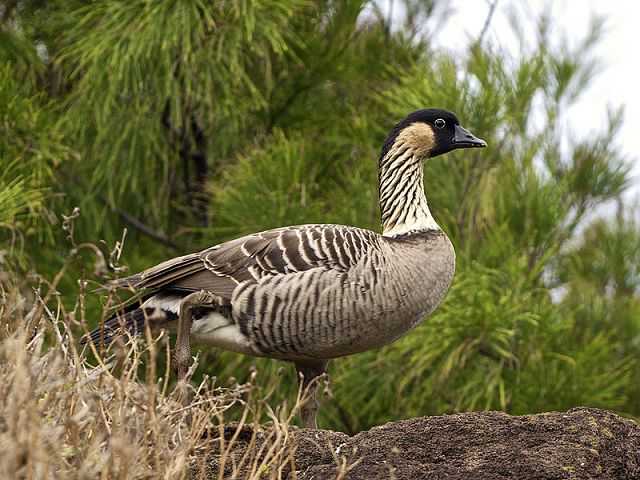 Lead author Thierry Work, a wildlife disease specialist with the US Geological Survey, suggested that the geese are probably contracting T. gondii by either accidentally ingesting cat faeces or eating insects that are carrying the parasite.

T. gondii could potentially kill the geese not only through acute illness — it is currently directly responsible for around four per cent of Hawaiian Goose deaths — but also by changing their behaviour. The parasite causes no obvious symptoms in its dormant form, but there is evidence that it increases seemingly risky behaviours in other species. For example, infected rodents lose their fear of cat urine, making them more likely to become predated by felines. This is bad for the rodents, but good for the parasites, which need cat hosts to complete the sexual phase of their life cycle. Many Hawaiian Geese are killed by hazards such as cars and predators but there is not yet proof to confirm whether T. gondii is contributing to these casualties.

Dr Work says he hopes this new research — which also indicates a greater threat of toxoplasmosis for humans and other Hawaiian wildlife — could "prompt some additional soul searching on how to address feral cats in an ecosystem where they don't belong."

Grant Sizemore, director of invasive species programs at American Bird Conservancy, echoed this statement: "While we appreciate cats as pets and acknowledge the important role pet cats play in many people's lives, it is clear that the continued presence of feral cats in our parks and neighbourhoods is having detrimental impacts on people and wildlife.

"Before another species goes extinct or another person is affected by toxoplasmosis, we need to acknowledge the severity of the problem and take decisive actions to resolve it. What is required is responsible pet ownership and the effective removal of free-roaming feral cats from the landscape."