Typically the year had started rather slowly for moths, but efforts gathered pace in May and by late June there were almost too many public events, local surveys and unexpected discoveries to fit into the seven-day week.

The month began with a mini heatwave and heralded the first 'big twitch' of the summer: a unique British mainland record of Ringed Border at Ilminster, Somerset, on the 2nd. Although recorded on the Channel Islands, this inland record came as a bit of a surprise for most of the UK's top moth-ers. 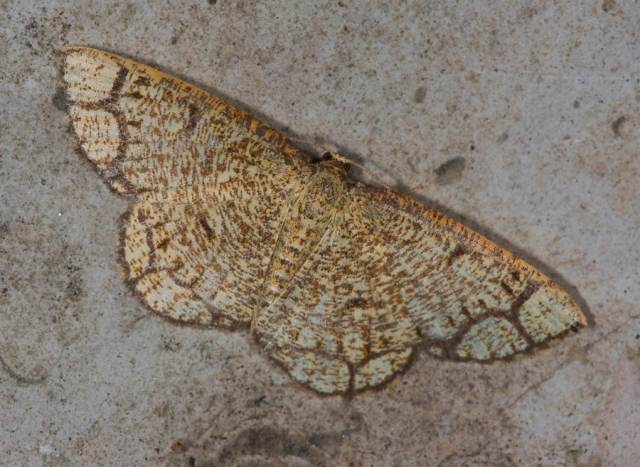 Next day, the temptation of a rescheduled Suffolk Moth Group meet at Lakenheath Fen RSPB could not be missed, and boy what a night it was. Things looked grim as a dusk swarm of mosquitoes hampered the early evening's proceedings. But as cloud moved in and the mini-vampires moved off, good moths arrived in the forms of Dotted Fan-foot, Goat Moth, Wood Carpet, Fen Wainscot, Double-lobed, Olive, Toadflax Pug and Reed Dagger. Then just after midnight, in a trap set amongst Meadow-rue, the Holy Grail of the East Anglian Fens was seen resting calmly on the top egg tray: a newly emerged Marsh Carpet. Even most of the Suffolk stalwarts had not seen the adult alive before and the beauty was proudly displayed next day in the visitor centre before release. 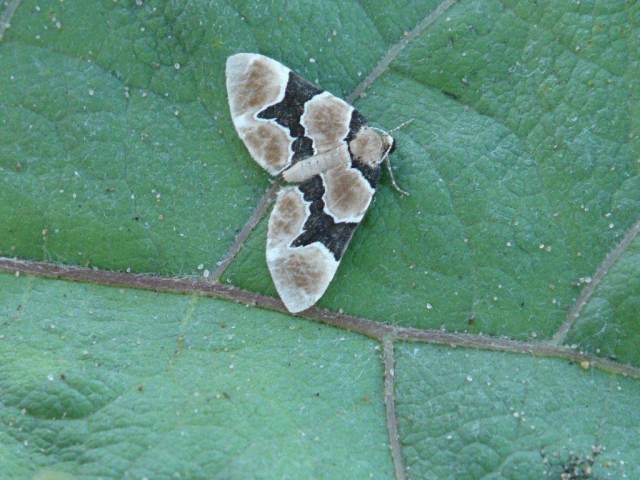 A week later it was back to Kent in bright but breezy conditions. The Dungeness Bird Observatory traps came up with the hoped-for Sussex Emeralds and Pigmy Footman and nearby Lydd-on-Sea had Langmaid's Yellow Underwing and another Toadflax Brocade. Special permission had been sought to trap at Folkestone Warren CP and on the night of the 9th here we saw several Sub-angled Waves, Reddish Light Arches, Privet Hawk-moth and Bordered Sallow amongst the 160 species caught. Next day Bright Wave and Least Carpets were seen on the coast north of Dover and in the evening some Forestry Commission woodland south of Canterbury gave us Dusky Peacock, Maple Prominent and an amazing male Triangle with his cute sticky-up tail. Back on the coast, overnight highlights at Dungeness included Small Ranunculus and Pale Grass Eggar.

Heading for the Moths Count North Wales event at Conwy on the 18th, we had ample time to find a lone Silky Wave on the Great Orme in the late afternoon. An early-evening visit to nearby Point of Ayre provided several Shore Wainscots in the dunes, together with a singing Natterjack Toad. Returning to a mountain pass near Conwy, our traps were getting wet as a rain band swept through but several Confused, Crescent Darts, Annulets and a Galium Carpet were ample reward for the uncomfortable last hour.

The family holiday to the Norfolk Broads in the last week was well placed for some premier marshland trapping. A visit to Hickling Broad NNR on the 27th saw many Dotted Footman, Garden Tigers, Reed Daggers and two fine Fenn's Waincots. At a nearby fen habitat the next evening several Small Dotted Footman were attracted, along with Oblique Carpets and a Webb's Wainscot. Early-morning visits to Matthew Deans' premier Suffolk coast constant effort site provided Tree-lichen Beauty, Sandhill Rustic, Star-wort and Plain Pug. 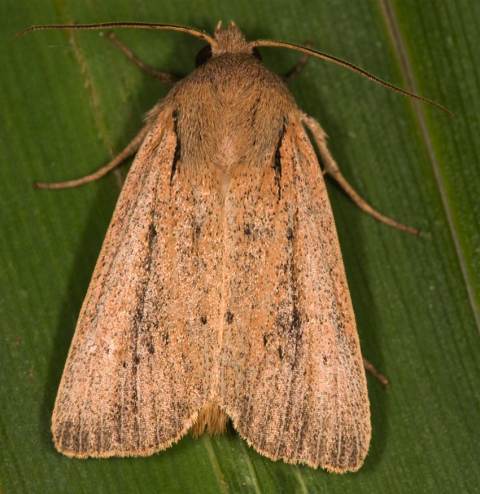 An offer of free bed and breakfast and another session at the 'Conwy Mountain' on the 3rd was not refused and this paid dividends next morning when an Ashworth's Rustic was identified over bacon butties! A Haworth's Minor caught the night before was carefully placed back in a stone wall in nearby Snowdonia on the way home.

News of a major Odonata discovery in Suffolk early in the month was enough for the team to head east to witness one of the first stages of British colonisation by the Willow Emerald Damselfly in Rendlesham Forest. Close by, another convenient meet-up with Matthew Deans revealed his latest migrant haul of Dusky Hook-tip and Rest Harrow.

We headed west back to Bedfordshire late in the afternoon for the long-awaited Moths Count workshop on White-spotted Pinion, led by none other than Paul Waring himself at the RSPB Lodge, Sandy. Even a four-hour deluge of biblical proportions could not dampen the enthusiasm of the man or group and at 22:50 the first of three of the rare elm-feeders arrived in the MV trap, together with at least four Lesser Spotted Pinions for good measure.

A trip to a Shropshire Moss NR mid-month saw clearing skies and cool conditons set in at dusk, but a single Northern Footman and several Large Ears and Haworth's Minors made the difficult terrain worthwhile. Some local survey work at Croome, Worcestershire, produced a new colony of Dog's Tooth and more Lesser Spotted Pinions.

Daily checks of internet insect news sites now revealed mouth-watering records of continental migrants from all parts of the UK. A Small Marbled at Portland Bill Bird Observatory, Dorset, on the 21st gave me a chance to connect with one of the smallest noctuids, looking all the more like a tortrix than a macro! Also on the patio, a Portland Ribbon Wave had probably only moved a couple of miles. Just two days later it was back again to Dorset where Britain's second mainland Dusky Scalloped Oak had been trapped near Weymouth. Awaiting us on guardian Paul Harris's table was the subtle mega and a bonus newly emerged Spanish Carpet that had been 'bred through' from live larvae collected on the Channel Islands. Early-evening searches of nearby Chesil Fleet came up with Channel Islands Pug and Beech-green Carpet. 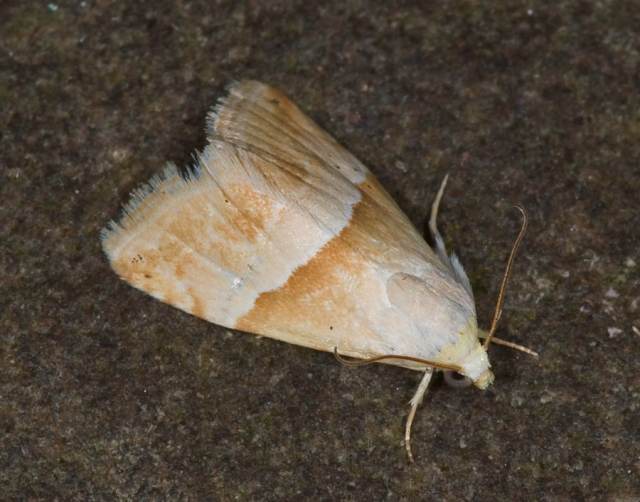 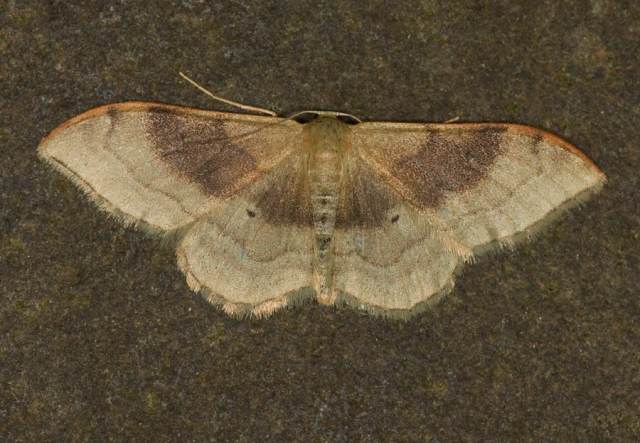 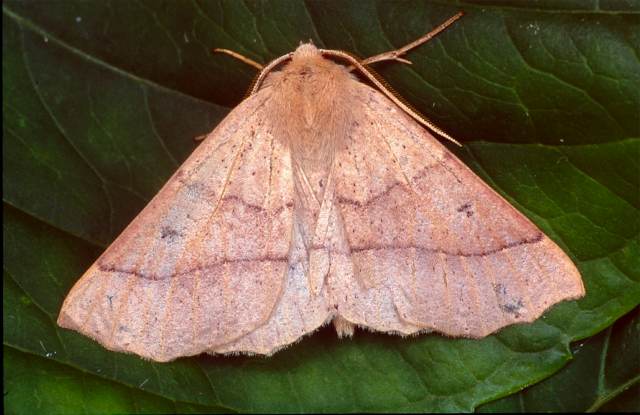 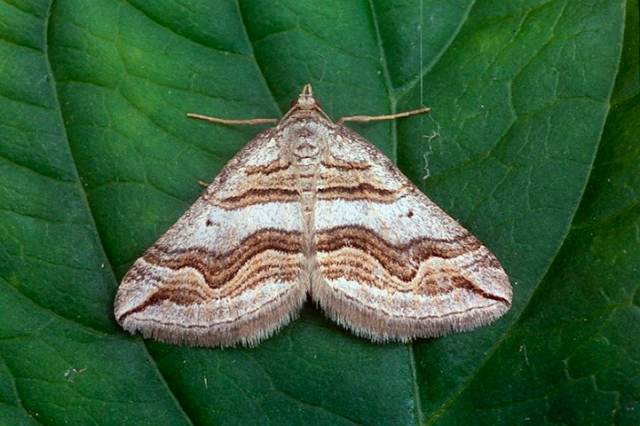 Spurn Bird observatory, East Yorks, kept a superb Silver-Striped Hawk-moth on display long enough for us to make the pilgrimage on the 29th. Next day was a wet one and the drive up to the Derbyshire Moors was a solemn affair. Meeting the already-soaked Suffolk Team in driving drizzle, we placed more traps in thick heather at 300m and hoped the weather would ease. Luckily it did and with the calm came Angle-striped Sallow, Large Ears, Hedge Rustic, Barred and Flounced Chestnuts, two migrant Dark Sword-grass and two well-earned Grey Chi. 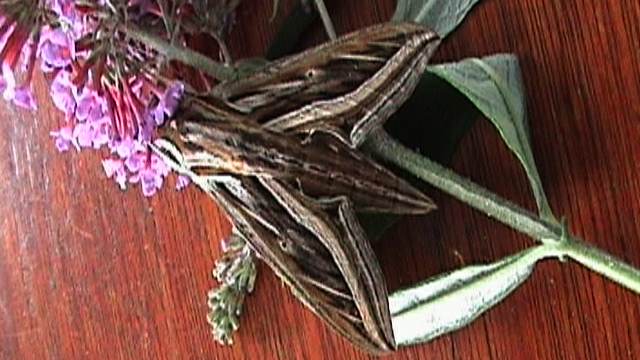 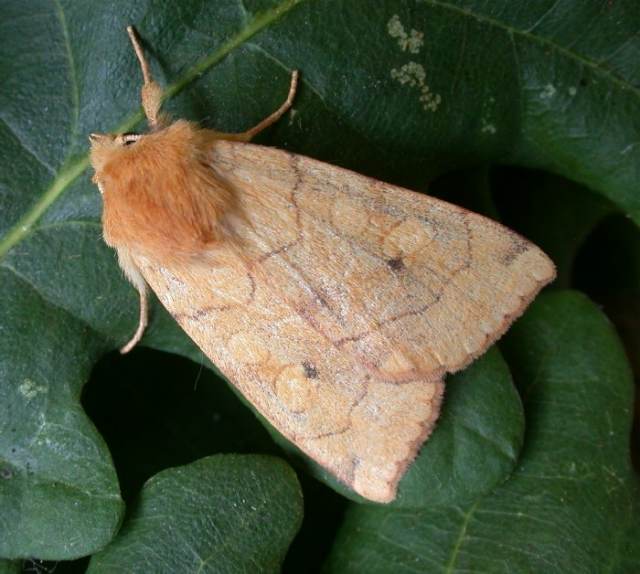 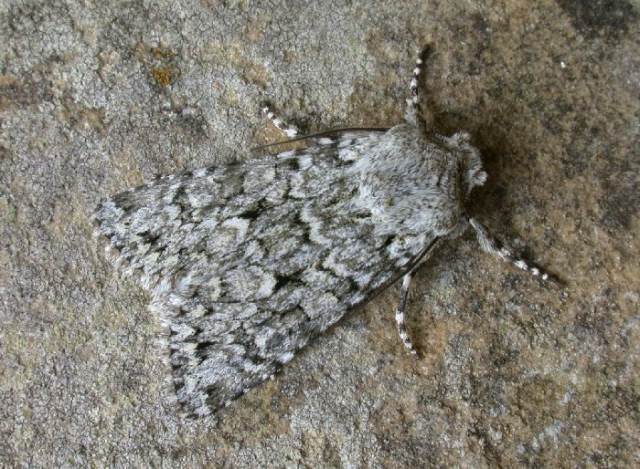 Word of Britain's fifth Tamarisk Peacock in east Kent was quick to get around on the 9th and a hastily arranged twitch to St. Margaret's at Cliffe ensued. The moth was presumably another migrant but is also a potential future colonist, as the food plant spreads along parts of the south coast. A surprise Wood Carpet and two Dark-Sword-grass were added treats at the display venue.

The mid-month Wyre Forest (Worcestershire) meet on the 11th surprised those present with a Common Fanfoot, the latest-ever county record by two months! Also in my home county, the following night at Monkwood NR, out-of-season Blotched Emerald and Green Silver-lines were recorded, along with a basketful of Oak Lutestring. At the end of the month, a secluded riverine marsh in south Dorset was the setting for a rare solo outing for me. Standing in an eighteen-inch-high Pond Sedge bed approaching dusk was rather surreal, but bang on cue five Blair's Wainscots cruised inches above the canopy, landing occasionally and offering views under torchlight as the light faded fast.

Next day on the coast, some historic stone bunkers were eventually located and inspection of the inner chambers revealed no fewer than six Bloxworth's Snouts preparing to spend the winter at roost among Heralds and Peacock butterflies.

Although the weather was far from ideal for migrants, another rendezvous with Peter Davy at Durlston CP had me bristling with anticipation as traps were set alongside the coastal path. It had been a fairly quiet evening and Peter had decided to close down relatively early at 22:35. On packing away his furthest trap he turned over an egg carton and calmly announced: "Sombre Brocade" — Durlston and Britain's only second ever was staring me in the face! It is hoped that this species, which lays its eggs on Holm Oak, already has a foothold on the south coast and will follow the success of the Oak Rustic in spreading east and west. A final overnight count for me included two Delicates, a Dark Spectacle, Small Mottled Willow and a fine Convolvulus Hawk-moth for the added extra effort. 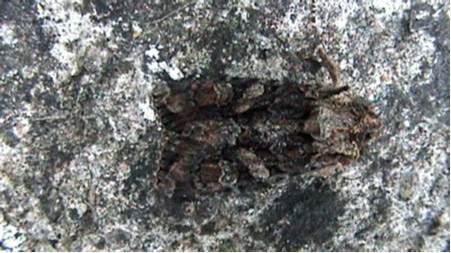 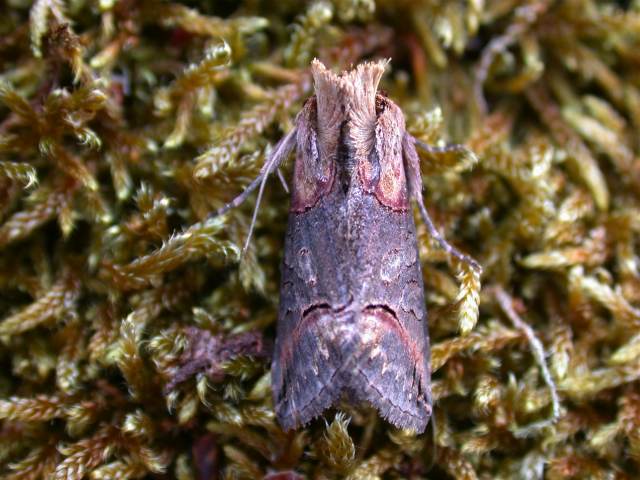 Most of my hoped-for target resident species had now been seen, with a few others having 'gone over' to wait for another year. However, the year was not over yet; late autumn can, if the winds have a southerly element, be a classic time for migrants and this month had its share. Headlands on the south coast are favourites and it was back to Durlston CP again with the West Midlands team on the 10th. Groups from Suffolk and Devon shared all 13 traps and the results were good. Scarce-bordered Straw, Four-spotted Footman, Pearly Underwing, Clancy's Rustic and the rare pyralle Antigastra catalaunalis were all recorded, together with resident Brindled Ochre, many Oak Rustics, Beautiful Gothic, Feathered Brindle, Cypress Carpet, White Point and another Sombre Brocade. 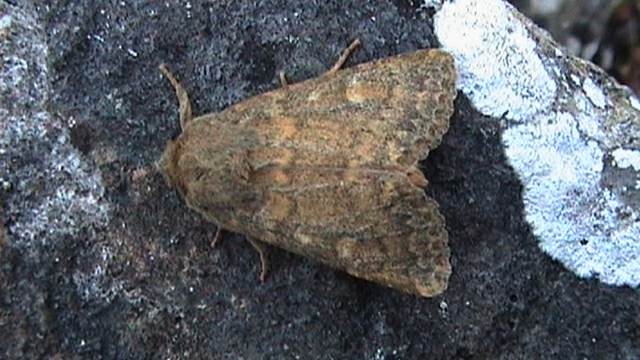 My own garden remained a hotspot for the local Figure of Eight and Juniper Carpet. Nick Smith's garden near Thrapston (Northants) was having a late trickle of commoner migrants in the last week but Britain's sixth Egyptian Bollworm on the 27th came like a bolt out of the blue and was proudly on display next evening for the eager few. A Blair's Mocha in southeast Kent was just too much of a temptation, having already got nearly halfway there, so we pressed on for yet another night in the 'obs' at Dungeness. Next morning we had Mallow and The Streak alongside our breakfast bowls before a short hop to Lydd-on-Sea for the Blair's Mocha and coffee.

Migrant recorders in Dorset continued to come up with the goods and a text from Paul Harris on the 1st to announce that a 'Plusia sp.' had been re-identified as Tunbridge Wells Gem saw us in cruise mode for the last time this year. Filming the rare migrant alongside a Flame Brocade and a Western Conifer Seed-bug was a fine epitaph for this super year. Back in Worcestershire the following weekend, the final field meeting was at Chaddesley Woods, where Pale November, Northern Winter and December Moths silently told us we could put the electrical gear away for another winter. 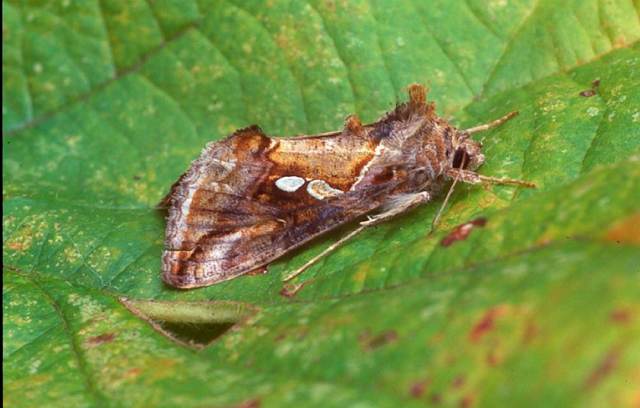 So it was a fantastic mothing year, where careful planning and incredible help from so many enthusiasts and recorders produced an unimaginable journey, the like of which will probably not happen again. I would particularly like to express my gratitude to the following people and organisations for assistance and use of photographs in this article.

And of course the team: Dave Jackson, Ian Machin, Darren and John Taylor.

Steve Whitehouse can be contacted for further information on 01905 454541 or email mailto:stevewhitehouse123@btinternet.com
Written by: Steve Whitehouse