Thirty years of intensive British and World birding had accumulated on my CV, and at the start of the new millennium I had unconsciously taken my foot off the avian pedal a little. I was instead developing an interest in other taxa: butterflies, dragonflies and orchids. In the spring of 2004 I accepted an offer to see an Emperor Moth caught nearby in a friend's garden. The sight of that and the 'Pandora's Box' effect of what else was on the egg trays in his Mercury Vapour (MV) light moth trap was a life-altering moment for me. Back in my Worcester garden I was soon armed with my own trap and a copy of the Field Guide to the Moths of Great Britain and Ireland by Waring, Townsend and Lewington. New moths of all colours, shapes and size kept me in awe and busy for a couple of years. My own county list of larger (macro) moth species rose steadily to 460.

Local moth-group events at nearby Chaddesley Woods, Hartlebury Common and the Wyre Forest constantly refreshed the amazing variety of species encountered as each month and season passed. Survey work on Cannock Chase and the Malvern Hills taught me the important side of scientific recording, where data can be used to aid biodiversity management action plans which benefit all wildlife habitats and species. Moth-trapping can be like a strong drug where you get addicted to the lure of both the surprise and expected species which turn up in your trap. Nearly all moths are released on site but in some instances individual moths are retained as record specimens. As with birding, the hard currency of this hobby (for some) is seeing new things. So following five years of Worcestershire garden and West Mercia nature reserve based moth trapping, it was time to spread my wings and look further afield to explore new habitats and look for some serious moth species in 2009. Many of the following moths are very rare and localised as breeding species and the exact sites at which they were seen are not disclosed.

Winter-hatched planning and the thought of trips to Scotland, North Wales, East Anglia, Kent and Dorset later in the year was more than enough to see off the 'moth cold turkey' of mid-winter. Short visits out to my local patch, Westwood Pool near Droitwich, provided some tasty starters in the form of Mottled Umber, Spring Usher and Pale-brindled Beauties. 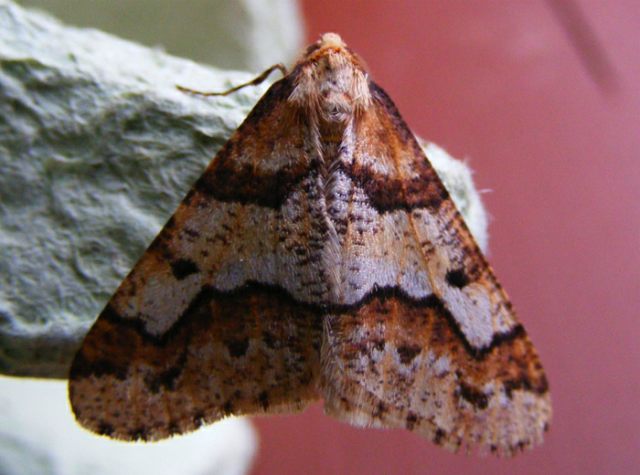 The first of two 'out-of-county' excursions to Somerset, on the 14th to Ilminster, was to see a superb male of the much-declined Small Eggar, along with equally fine Red Sword-grass and Dotted Chestnut. A week later, our group joined a light-trapping session in forestry near Street, giving us the exciting experience of several Barred Tooth-striped creeping along Wild Privet in torchlight. Much closer to home, an old Aspen and Birch woodland SSSI provided both of the day-flying Orange Underwing and Light Orange Underwings late in the afternoon on 29th. 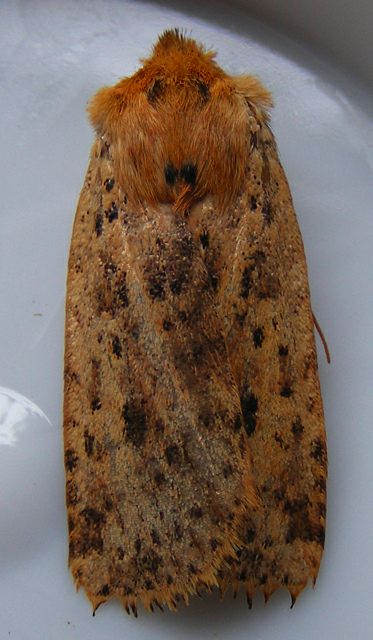 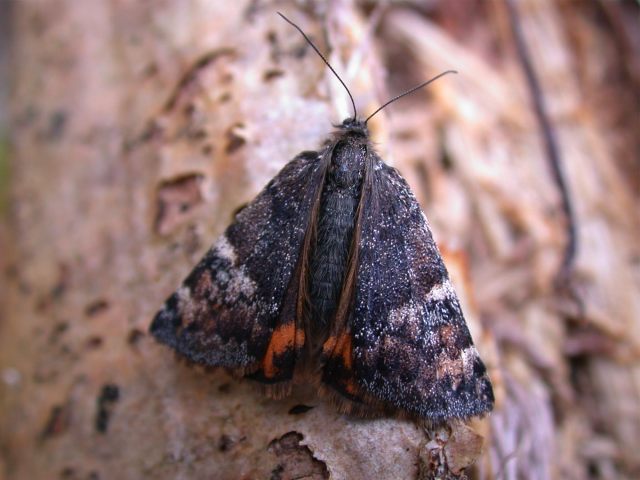 Some county survey work in the Teme Valley was rewarded with the discovery of a healthy population of White-marked on the 3rd. A fairly impromptu dash to the Essex coast on the 12th gave us a great opportunity to photograph the very localised Sloe Carpet, as two were released back into their native Blackthorn thicket. Crossing the border into south Suffolk early that evening to link up with other 'moth brethren' on the saltmarsh edge of the River Deben, we attracted several of the 'estuarine form' of Northern Drab. This was the slightly larger yellowish brown/grey variety, quite different from the typical 'two-tone grey' heathland type I had seen on Cannock Chase in 2007. 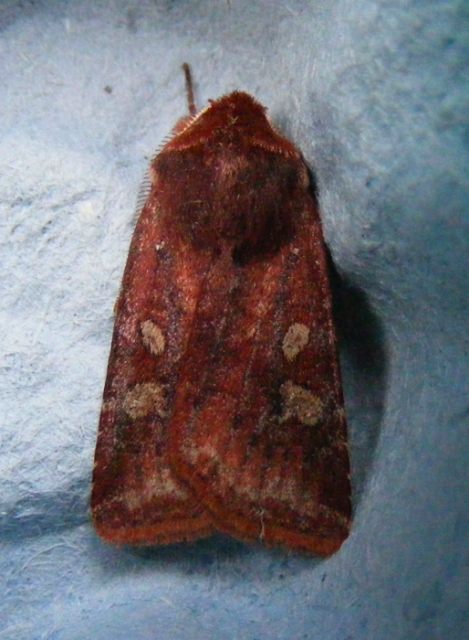 A Hampshire Moths Group meeting in the New Forest on 18th saw a large assembly hoping for one of the Forest's key spring specialities. With the help of the local ranger, we eventually managed to see a slightly worn Marbled Pug that had settled on his nearby kitchen window. Numerous trap inspections at the site came up with Scarce Prominent, Waved Umber and Blossom Underwing and finally, just as we were leaving, another absolutely pristine Marbled Pug was found by the Suffolk Team, giving us the final adrenaline rush, much needed for the drive back to the Midlands. 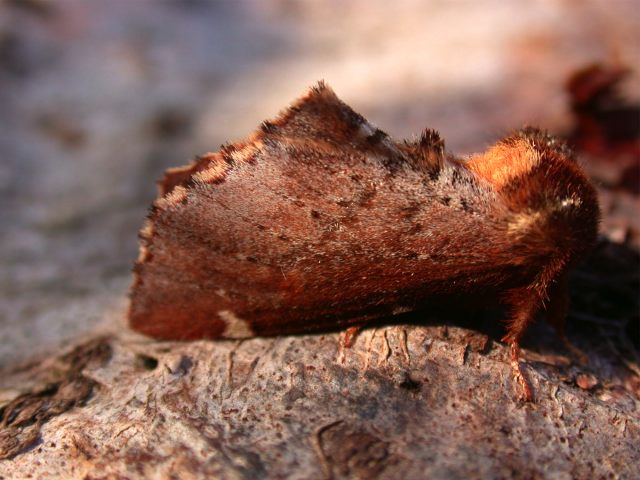 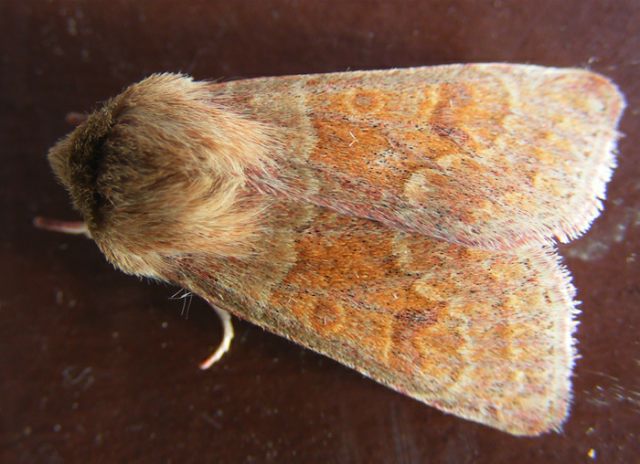 A Chamomile Shark in Dorset, sitting passively on a Portland Stone wall while photographs were taken on the evening of 20th, was not giving away any secrets as to why this moth is much scarcer in recent years. Local photographic guru Patrick Clement gave us a lesson in essential genitalia examination of a Golden-rod Pug at his home trapping site in Halesowen, West Midlands on 25th.

An overnight drive to Dungeness, Kent, on the 30th to see the mega-rare Crested Lark also gave us chance to chill out in company of the many site-characteristic Light Feathered Rustic at the bird observatory trap, followed by a quick visit to the nearby legendary Dorothy Beck's abode for the ultimate spring bonus of the very local Toadflax Brocade.

Kentish Glory had always been one of my top ambition moths and a trip to the highlands of Scotland is now the only way to see it. Previously found in seven English counties, it needs young birch growth to thrive and readily suffers when the trees get too big! The problem with Scotland in the spring is the weather: very unpredictable, even in May! Our West Midlands team set off on the 7th, fully undaunted by the unconvincing BBC forecast. A Scarce Prominent resting at the Ralia service area on the A9 was to be the only moth of the day as heavy rain set in at dusk. The 8th was also a washout, but sunshine finally broke through on the 9th. We set off over the upland route from Speyside to Forres, happily picking up Netted Mountain Moth on the way, near Lochindorb.

Tom Prescott, Highland Butterfly Conservation officer, had kindly arranged full access to Culbin Forest on the Moray coast. With temperatures here a little higher, we were delighted to attract Autumn Green Carpet, Lunar Thorn and many Broom-tips — but no Glory! The following night back near Aviemore, with the thermometer hardly past 5°, we finally fulfilled our dreams, when a pristine male Kentish Glory flew into an MV trap at about 22:20. Day searching of posts and heather south of Newtonmore gave us Light Knot Grass and several Glaucous Shears before the long haul back south. 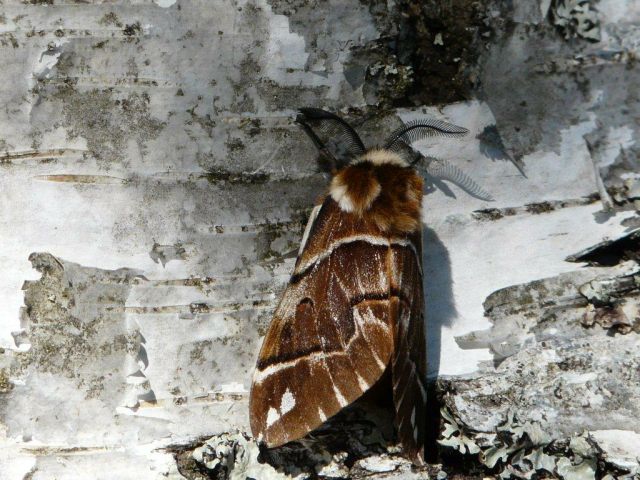 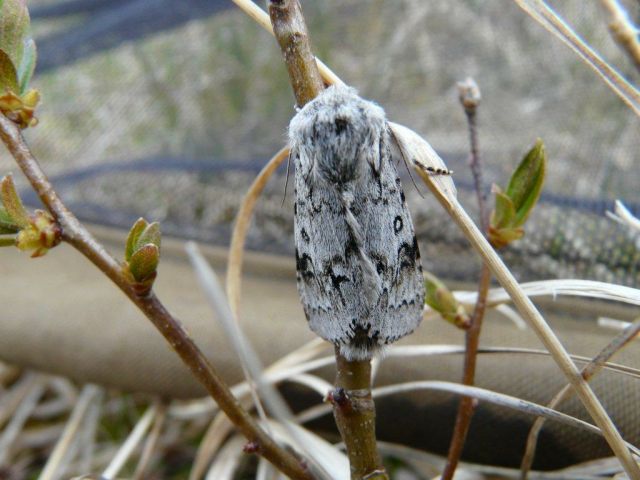 An evening with the joint Dorset Recorder on one of the county's best heaths on the 20th did not disappoint, with Pale Oak Beauties, Little Thorns, Birch Mochas and a superb Dingy Mocha, all before midnight.

A long-awaited trip to southeast Kent on the 28th started well with Dark Tussock, Cream-spot Tiger, White Spot and Marbled Coronet all on the wing the first evening at Dungeness. A fortuitous walk across some interior down grassland the next day gave up one very localised Black-veined Moth, while a stroll along the coastal cliffs east of Folkestone saw a Dew Moth clinging to grass stems in the late-afternoon sunshine.

Early-June reports of continental migrants being logged at several sites in southern England gave everybody hope for an impending 'migrant summer', and another visit to Ilminster on the 7th for a Portland Ribbon Wave was further first- hand evidence that this was about to happen. Although breeding sparingly on the Dorset coast, an inland record of this nature is more likely to be a European-born wanderer. Returning via a Somerset Level RSPB reserve the same afternoon we were able to see several Argent and Sables at one of their key breeding sites.

Seemingly now on a great 'roll', we headed to north Hampshire on the 9th to see a fabulous tiny Rosy Marbled released back onto heathland near Borden. After lunch we eventually reached some idyllic water meadows near Andover where many Silver Hooks were easily photographed and a bonus Balsam Carpet was found on lush riverside Orange Balsam plants. 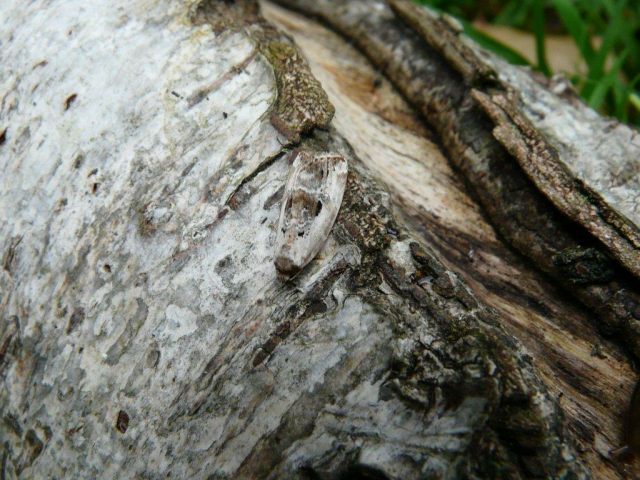 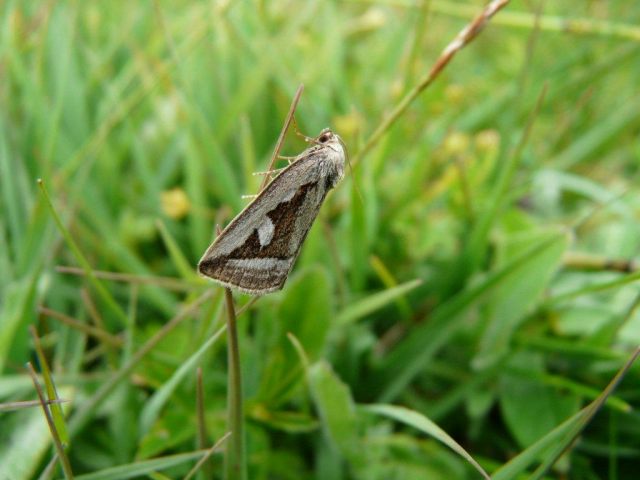 A Breckland heath was the venue for a Suffolk Moth Group meet on the 12th June. Setting up many MV traps in old flint pits and chalk grass/scrub had the desired effect with several White Colons and Lunar Yellow Underwings appearing quickly, followed by a single Grey Carpet and two Goat Moths! On the final trap round, a rare migrant in the form of a Rannoch Looper completed a memorable night. At this time many Rannoch Loopers were being found across England, in the largest-ever influx of the continental form of the species. 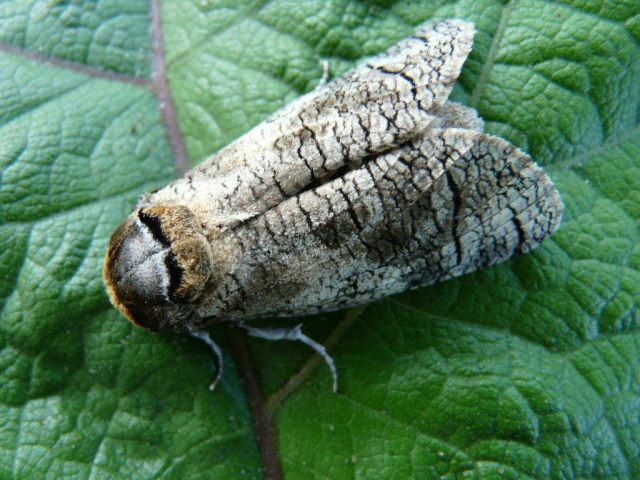 Later in the month we were invited to a private Dorset woodland site, where on the balmy and overcast night of the 21st we logged over 220 species of moth. Treated to an object lesson in micro-moth identification, this long nocturnal survey was also capped by several Valerian Pugs and an awesome Netted Pug. Next day, after just three hours sleep and a nearby full English breakfast, a thorough search of some prime acid heathland gave us a splendid Purple-bordered Gold.

A very busy month concluded with another trip to north Scotland where, in coniferous forestry west of Inverness, recent pheromone-based BC surveys had showed Pine-tree Lappets to be much more numerous than previously thought. Our tally of ten males to just three MV traps at one small site was par for the course. In with this spectacular catch was a pristine Saxon — surely one of Britain's finest northern moths. Good weather the following afternoon saw day-flying Smoky Wave, Small Argent and Sable, Lead Belle and July Belle all on moorland south of Newtonmore.

Trapping at Insh Marshes RSPB that evening produced Welsh Wave, Chestnut-coloured Carpet and Peacock Moth before exhaustion set in. Brilliant sunshine early next morning was enough to spur us up to the highest peaks in the Grampian Mountains. After a steep climb through thickening cloud we finally emerged onto a tundra plateau, now illuminated by strong rays and the enigmatic Black Mountain Moth flitting low between tiny alpine flowers but stopping frequently allowing good views to be obtained.

The first half of the year ended on a high locally with Obscure, Silky and Southern Wainscots in an Upton Warren NR reedbed.