A birder's guide to the new-look Rufous Antpitta complex

For years, the Rufous Antpitta complex has been suspected to comprise multiple species-level taxa, with substantial vocal differences between populations. Now, after much anticipation, a 74-page treatise published in Zootaxa by Isler et al – in tandem with an earlier phylogenetic study by Chesser et al (2020) – resolves the complex combining morphological, bioacoustics and molecular data.

However, even for those who diligently keep subspecies lists, determining which of these newly defined species you have seen is not straightforward, owing to the description of six new species. For example, nominate (rufula) 'Rufous Antpitta' in Colombia now comprises three species: Muisca Antpitta of the east Andes, Equatorial Antpitta of the central Andes (mostly!), and Chami Antpitta of the west Andes. Similarly, Chestnut Antpitta – formerly regarded as a monotypic species endemic to Peru – is redefined as three species. 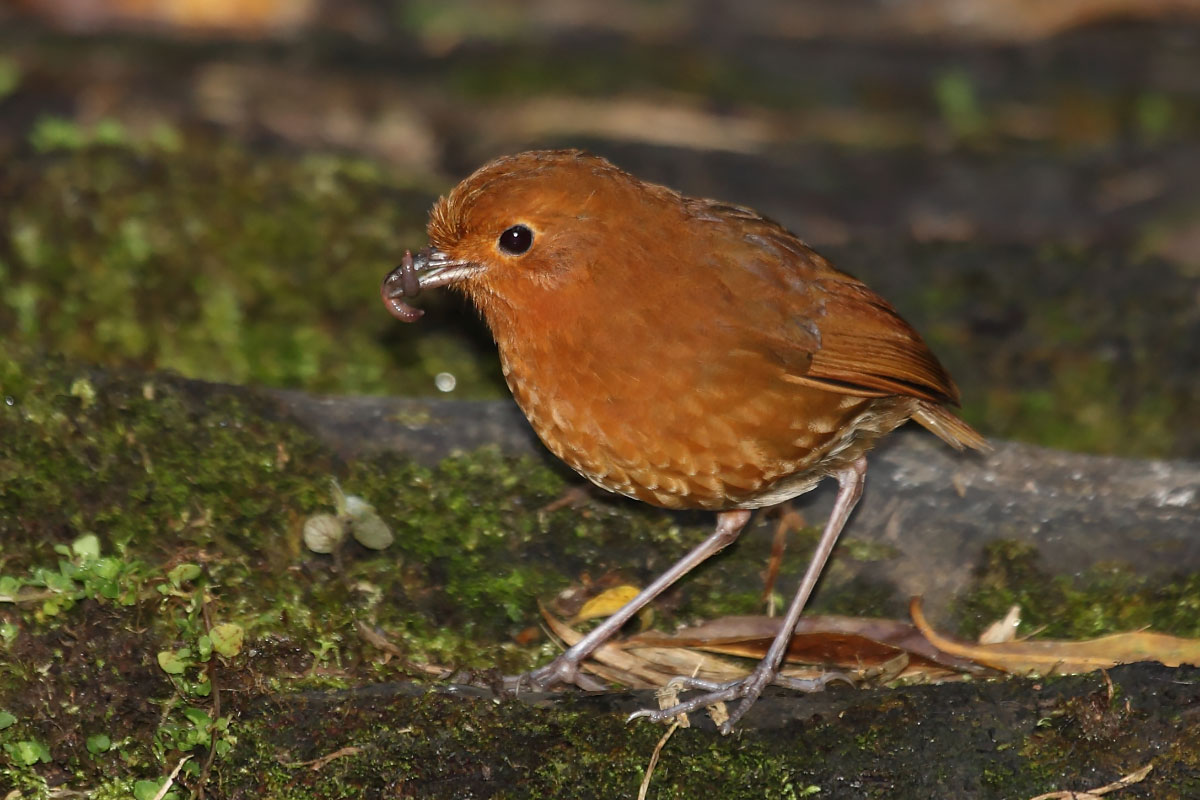 This 'Rufous Antpitta', photographed in Ecuador, is an Equatorial Antpitta as per the new taxonomic recommendations. Several of the taxa look identical and can only be reliably separated on vocalisations, DNA and range (Nigel Voaden).

Below, I summarise the distributions of these newly defined species along with where birders are most likely to have encountered them. Plumage differentiation in this complex is minimal (and intraspecifically variable), the splits principally being justified on vocal and genetic grounds. To prevent this article becoming exceedingly protracted, I have not detailed the diagnostic features of each species, but those who hanker for more detail about what justifies the recommended taxonomic changes (or doesn't, depending on your outlook!) can find it in the original paper, which can be read for free online (see References). In the absence of alternatives, I have adopted the English names suggested by the authors, although the current trend against patronyms/honorifics may see some of them replaced.

[Despite Bicolored Antpitta Grallaria rufocinera being genetically embedded within the Rufous Antpitta complex (see Chesser et al 2020), its taxonomic rank and distribution are unchanged by this latest research, and its very distinctive plumage render it unlikely to cause much confusion, thus I have excluded it from the following for the sake of brevity.] 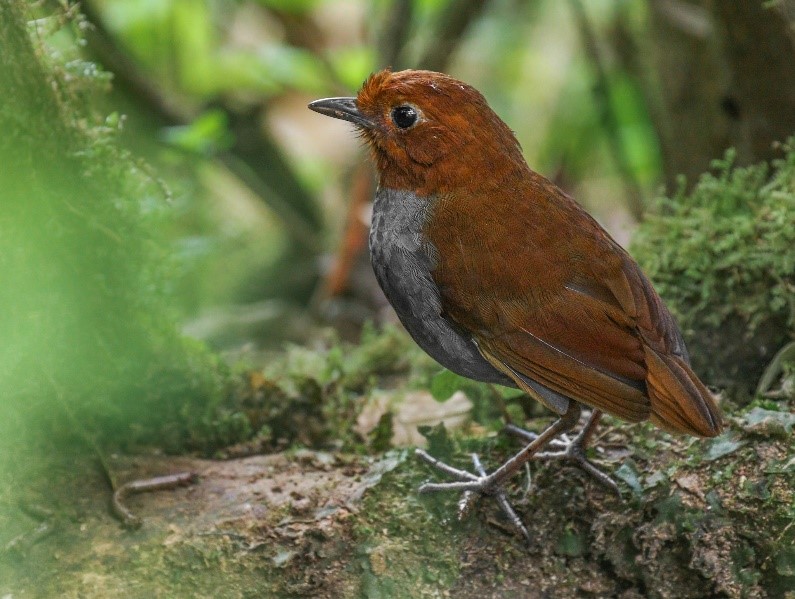 The most morphologically distinct member of the complex with slate-grey underparts, Bicolored Antpitta is now known to be more closely related to the newly defined "Muisca Antpitta" Grallaria rufula sensu stricto, than the latter is from the rest of the Rufous Antpitta complex (Alex Berryman).

The Rufous Antpitta complex is distributed from Venezuela in the north to Bolivia in the south. Isler et al's work revises it to comprise 12 different species-level taxa, as follows:

This taxon has already been split by Birdlife/HBW (but not IOC or Clements), a fact omitted by the authors of the study in question, who follow the lead of del Hoyo and Collar (2016) in recommending it as a monotypic species. No change in taxon's range.

Distribution: Restricted to the Perijá mountains that straddle north-east Colombia and north-west Venezuela; almost all birders will have seen it on the Colombian side, at sites such as the Chamicero del Perijá Reserve. 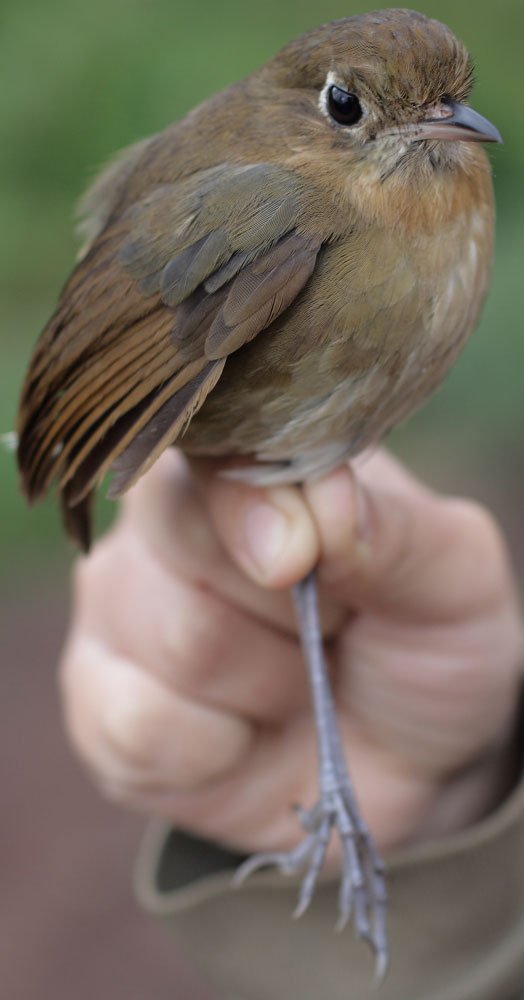 Perijá Antpitta is quite distinctive in appearance, and occurs only in the Perijá mountains of north-east Colombia and north-west Venezuela (Andres Cuervo).

Distribution: A similarly restricted species, endemic to Santa Marta in northern Colombia. For those who have visited the region, it is conspicuous along the road up to Chuchilla San Lorenzo (e.g. at the El Dorado ProAves Reserve).

The original 'Rufous Antpitta'! The range of this subspecies (now recognised as a monotypic species) is much reduced.

Distribution: Endemic to the east Andes of Colombia and marginally into adjoining west Venezuela. For those who have seen 'Rufous Antpitta' while day-tripping from Bogotá, this is your bird. Rather common in areas east and north-east of Bogotá, including Chingaza and Monterredondo (where you are likely to have looked for Cundinamarca Antpitta G kaestneri).

Distribution: Restricted to the western Andes of Colombia, west of the Cauca River, at 2,350-3,650 m. Typical birding hotspots for this species include the legendary Montezuma Road, the Yellow-eared Parrot Reserve (south of Jardín), Las Tangaras ProAves Reserve, and the Colibri del Sol ProAves Reserve.

Photographed at the Yellow-eared Parrot Reserve near Jardín, Colombia, this is a Chami Antpitta (Fabrice Schmitt / Macaulay Library).

A previously described subspecies that was usually synonymised with nominate rufula; it is now resurrected as a monotypic species.

Distribution: The most widespread species in the new complex, occurring from the central Andes of Colombia, south through Ecuador, to northernmost central Peru (north of Río Marañón and east of Río Huancabamba). In Colombia, it is frequently recorded around Manizales (Rio Blanco, Nevado del Ruiz – especially along the new road, Finca Cortaderal etc) and further south near Pasto (e.g. Paramo Quilinsayaco). It is the only 'Rufous Antpitta' in Ecuador, where it is readily seen at birding hotspots including Yanacocha, Papallacta and Podocarpus NP. Not likely to be seen in Peru by most visiting birders, but does occur near the Ecuadorian border (e.g. Santuario Nacional Tabaconas-Nambelle).

Distribution: Restricted to a relatively small part of north-west Peru, west of the River Marañón, this species is most frequently seen around the town of Cajamarca, particularly along the main road north-east towards Celendín (8B) around Cruz Conga, or further north around Pagaibamba.

Distribution: Endemic to central Peru, east of the River Marañón, south to the River Huallaga, at 2,400-3,900 m; altitudinally parapatric with the newly defined 'Chestnut Antpitta' (see below). Most birders will have seen it either: i) at the northern end of its range, east of the sites for Cajamarca Antpitta, towards Leymebamba, especially at Abra Barro Negro; or ii) at the very southern limit of its distribution, around Carpish Tunnel, Bosque Unchog etc.

Distribution: Tiny range on the east Andean slope in Huánuco and Pasco (Peru), bordered by the River Huallaga to the north, and the River Paucartambo to the south. Altitudinally parapatric (and perhaps narrowly sympatric) with newly described Oxapampa Antpitta (see below), it has been seen by few birders, mostly in the Oxapampa region.

Distribution: Endemic to the east Andean slope of Peru, between the River Perené and River Paucartambo to the north, the River Mantaro to the south, and the River Ene to the east, at 3,000-3,600 m. Birders are most likely to have encountered this species on the highway (24A) between Huancayo and Satipo (the 'Satipo Road'), especially around Puente Carrizales, or further south in the Andamarca Valley. Here, it occurs alongside Oxapampa Antpitta (previously part of 'Chestnut Antpitta'; see below).

Distribution: Endemic to southern Peru, south-east of the River Ene and east of the River Apurimac, between the River Tambo to the north and River Marcapata to the south, at 2,450-3,650 m. The two subspecies are separated by the River Yanatili (nominate to the west, marcapatensis to the east).

For those who have seen a 'Rufous Antpitta' on a daytrip out of Cusco, this is the one! It is readily seen at well-birded sites around the Andean town including the Abra de Malaga road, and along the Manú Road at the appropriate elevation (including the Wayqecha Biological Station and its environs).

New taxon, recognised as a new monotypic species. Both the short and long songs of this species are distinct, and its underparts and very finely streaked to breast (more uniform in Bolivian Anpitta).

Distribution: This species has a very restricted range (at least on current knowledge), occurring only in Puno (south-easternmost Peru) and extreme western La Paz, Bolivia; at 2,900-3,150 m. Seen by few birders and ornithologists, those wishing to see this species will have to prepare themselves for something of an expedition...!

Distribution: Endemic to Bolivia in eastern La Paz and Cochabamba, at 2,950-3,500 m. For 99% of birders, this will be the species they have observed in Bolivia, where it is commonly seen near La Paz (e.g. the Old Coroico Road and the Cotapata Track), Cochabamba (e.g. the Corani/Tablas Monte area), or further east around Serrania de Siberia. 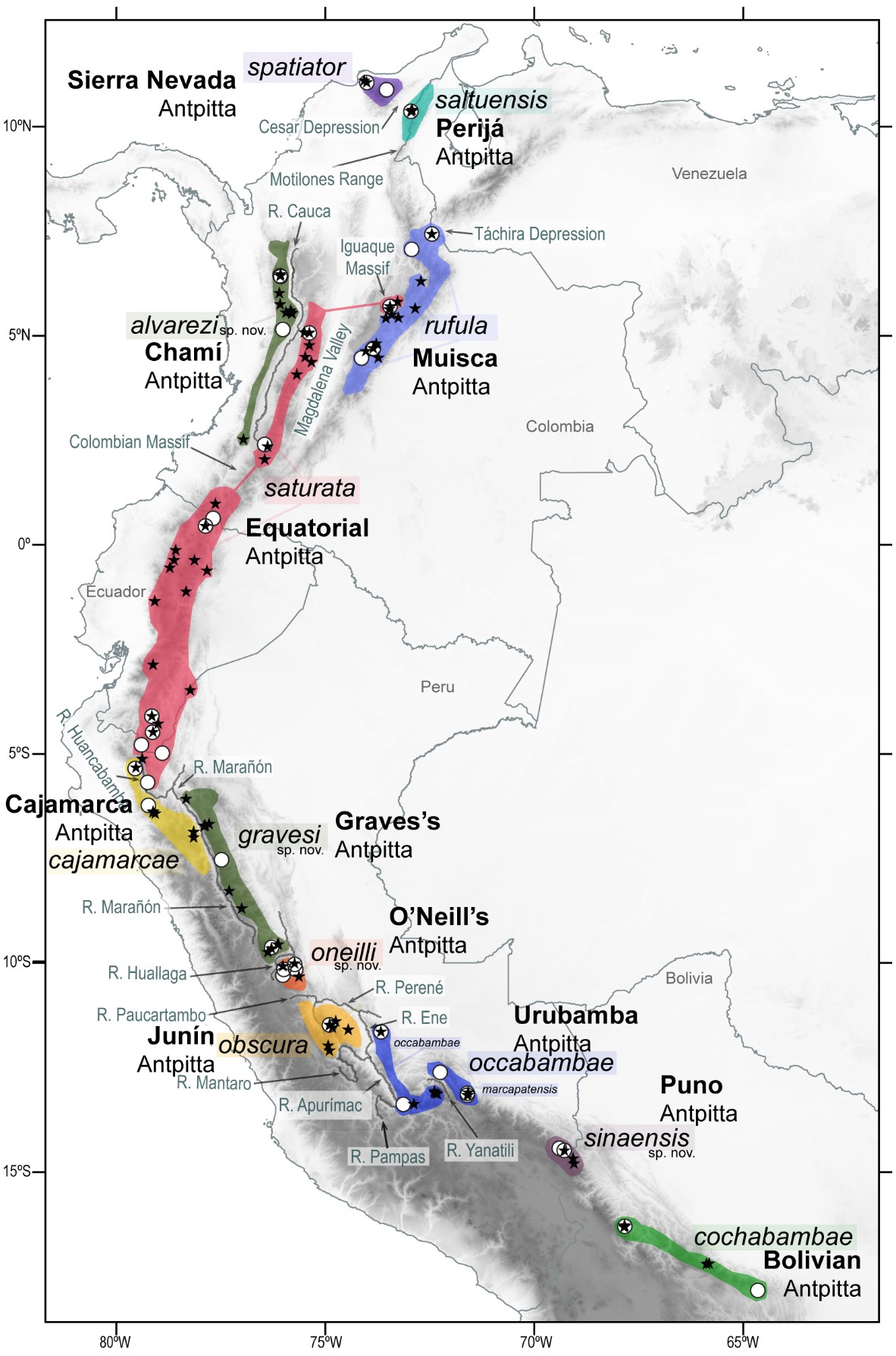 New species limits and ranges of what was previously 'Rufous Antpitta'.

The northernmost population of 'Chestnut Antpitta', this species occurs east of the River Marañón, and north of the River Huallaga, thus the range is the broadly the same as that of the newly recognised Graves's Antpitta (although the two are altitudinally parapatric, the present species occurring at 1,700-3,000 m). This taxon is unique in apparently having no short song.

Birders are likely to have seen this species either: i) at its northern limit around Abra Patricia, home to the famous Owlet Lodge; or ii) at the southern limit of its range, around Senda Paty or the Carpish Tunnel area, north-east of Huánuco.

Vocally and morphologically this species is only subtly different from Ayacucho Antpitta (see below), from which it is divergent by c 4% in mtDNA.

Distribution: Crossing the River Huallaga to the south, you are now in the range of this newly described species, which occurs south to the River Ene, at 2,400-2,700 m. This species is thus parapatric with O'Neill's and Junín Antpittas.

Birders are most likely to have observed this species around the town of Oxapampa, especially along the Andamarca Road, or further south along the Huancayo-Satipo Road, in the forest above Apaya.

Distribution: Occurs west of the River Apurímac between the River Mantaro and River Pampas; at 2,500-3,700 m. The least frequently observed of the former Chestnut Antpitta complex, Ayacucho Antpitta has been seen by only a few adventurous birders. 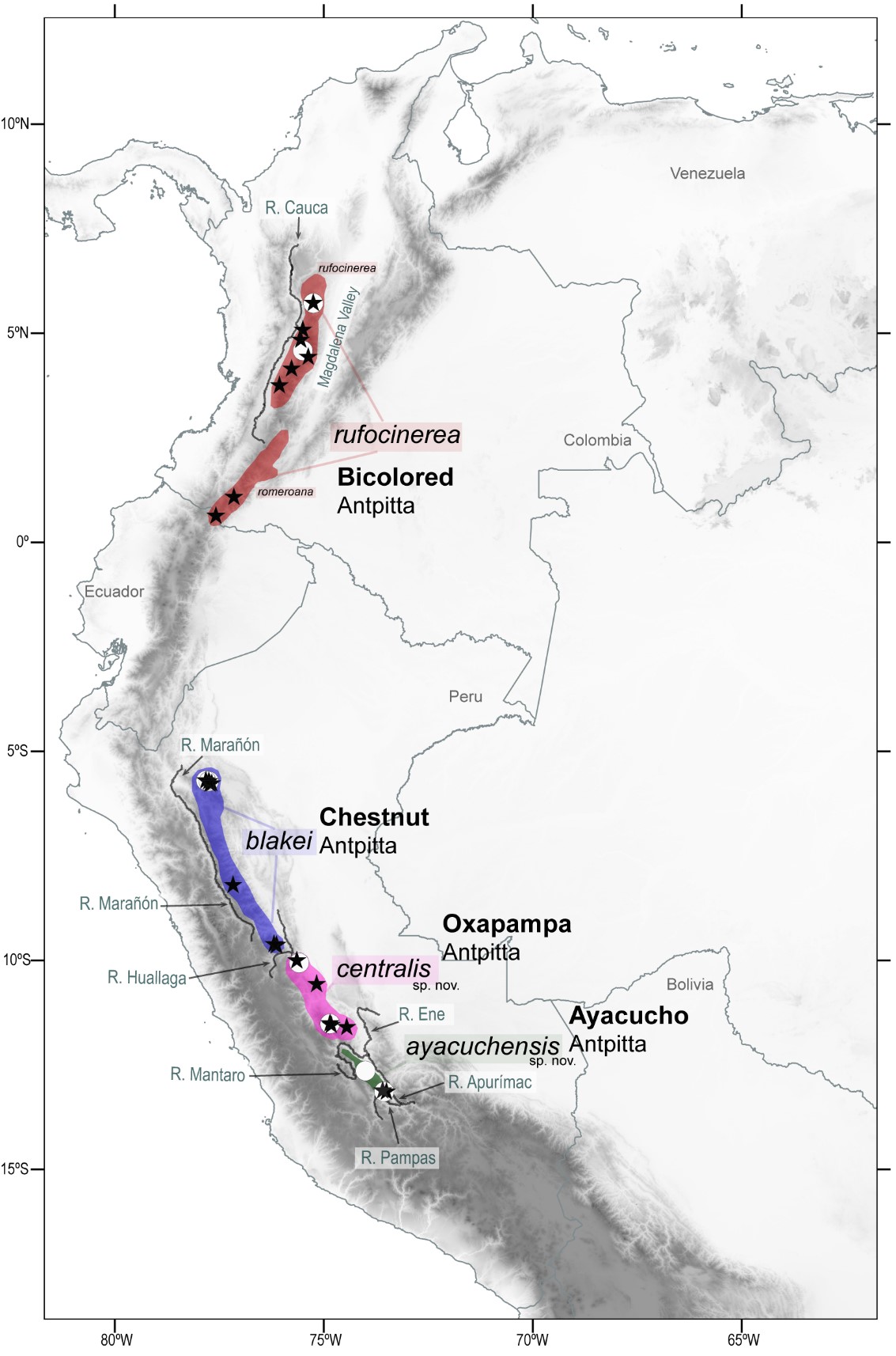 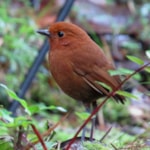